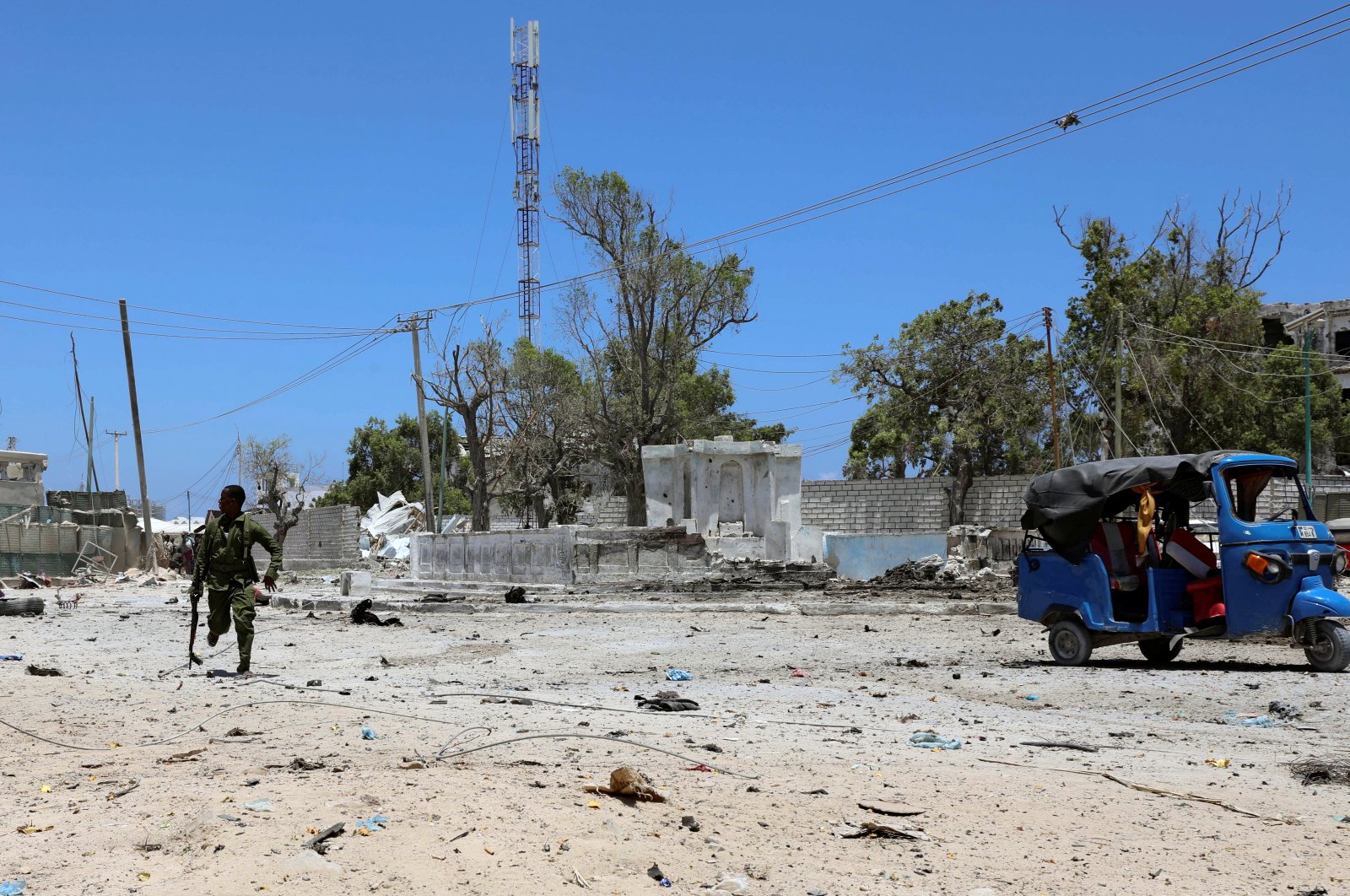 A Somali soldier runs to hold position as an al-Shabab militia storm a government building in Mogadishu, Somalia, March 23, 2019. (Reuters Photo)
by Nuradin Dirie May 27, 2020 12:05 am
RECOMMENDED

Ahmed Muse Nur, the governor of Mudug, in Somalia's Puntland State, was killed by the al-Shabab terrorist group on May 17, 2020. He was Somalia's third regional governor killed by the group in less than a year. The group earlier killed the Governor of Nugal, Abdisalam Hassan Hirsi, on March 29, 2020, and the Governor and Mayor of the capital Mogadishu, Abdirahman Omar Osman "Yarisow," on Aug. 1, 2019, in a particularly horrific suicide bombing inside his own office.

The more emboldened al-Shabab has become, the busier it has been ever with operations and attacks of all kinds – from ambushes on African Union forces in Somalia to complex, organized attacks against government and diplomatic installations and targeted assassinations of civilians, the group has become more and more active in recent years.

Since Somalia's current federal administration took power in early 2017, al-Shabab carried out at least 1,598 attacks using improvised explosive devices (IED), killing thousands of people, according to the United Nations. This translates into two such incidents every day. Many more people were killed in complex suicide attacks and targeted assassinations.

It is a gloomy picture that does not offer hope. The country's already fragile security is on a downward trajectory despite massive international support. The world continues to spend billions a year to support security in Somalia with little to show for it.

A lot of Somali troops are being trained, equipped and paid to conduct operations against al-Shabab, but they are being trained differently by different countries; Turkey, the U.S., the U.K., the European Union, Kenya, Ethiopia, Uganda and recently by Eritrea, to name a few. Upon their graduation, no one knows under what curriculum they have been trained, what doctrine they have been taught and how that will benefit the formation of a cohesive Somali national army. But perhaps most worryingly, no one knows who these troops are loyal to and how they are being commanded and controlled.

Rebuilding a shattered army after a civil war is challenging enough but what is even more challenging is rebuilding these forces to serve a new Somalia with a new federal governance system. Under such circumstances, it is absolutely essential to have a political agreement on how the new security set up should be formed, commanded and managed. This is absolutely critical to make sure that the new army is trusted by everyone as it is the only guarantee against a renewed civil war in Somalia. This is not just academic speculation. We recently saw such a scenario being played out in the Gedo region in Jubaland.

There was a similar political agreement and national security structure that was painstakingly negotiated by Somali stakeholders in 2016-2017, under the auspices of the last federal government of Somalia. It included a solid framework of how to build accountable, inclusive and efficient armed forces to serve the new Somalia. It was accepted by the current government and was finally supported by international partners in a meeting in London in 2017, as the roadmap to rebuild Somali security. As soon as that meeting ended and Somali delegates went back to Mogadishu, the current federal government of Somalia threw that framework, the roadmap and the agreement in the dustbin.

Since then, one is only sure that whatever security forces are being built in Somalia are neither inclusive nor accountable. As a consequence, al-Shabab has fully exploited this political discord and exponentially increased its deadly operations throughout Somalia and beyond. They know fully well that they cannot be defeated by an unaccountable security force in Somalia no matter how much they are trained, equipped or financed.

It is time for Somali political stakeholders to demand, more forcefully, a return to the agreed security framework and for international partners to condition their support for the tangible implementation of that agreed and accountable framework. Anything less would allow this tragedy to continue. We can only defeat al-Shabab through politics, including the politics of security.

*Chief political adviser to the President of Puntland and chairs his Senior Advisory Council. Until recently he has been the Special Adviser to the U.N. envoy to Somalia.

*Chief political adviser to the President of Puntland and chairs his Senior Advisory Council. Until recently he has been the Special Adviser to the U.N. envoy to Somalia.
RECOMMENDED