Somalia's state-building after the pandemic 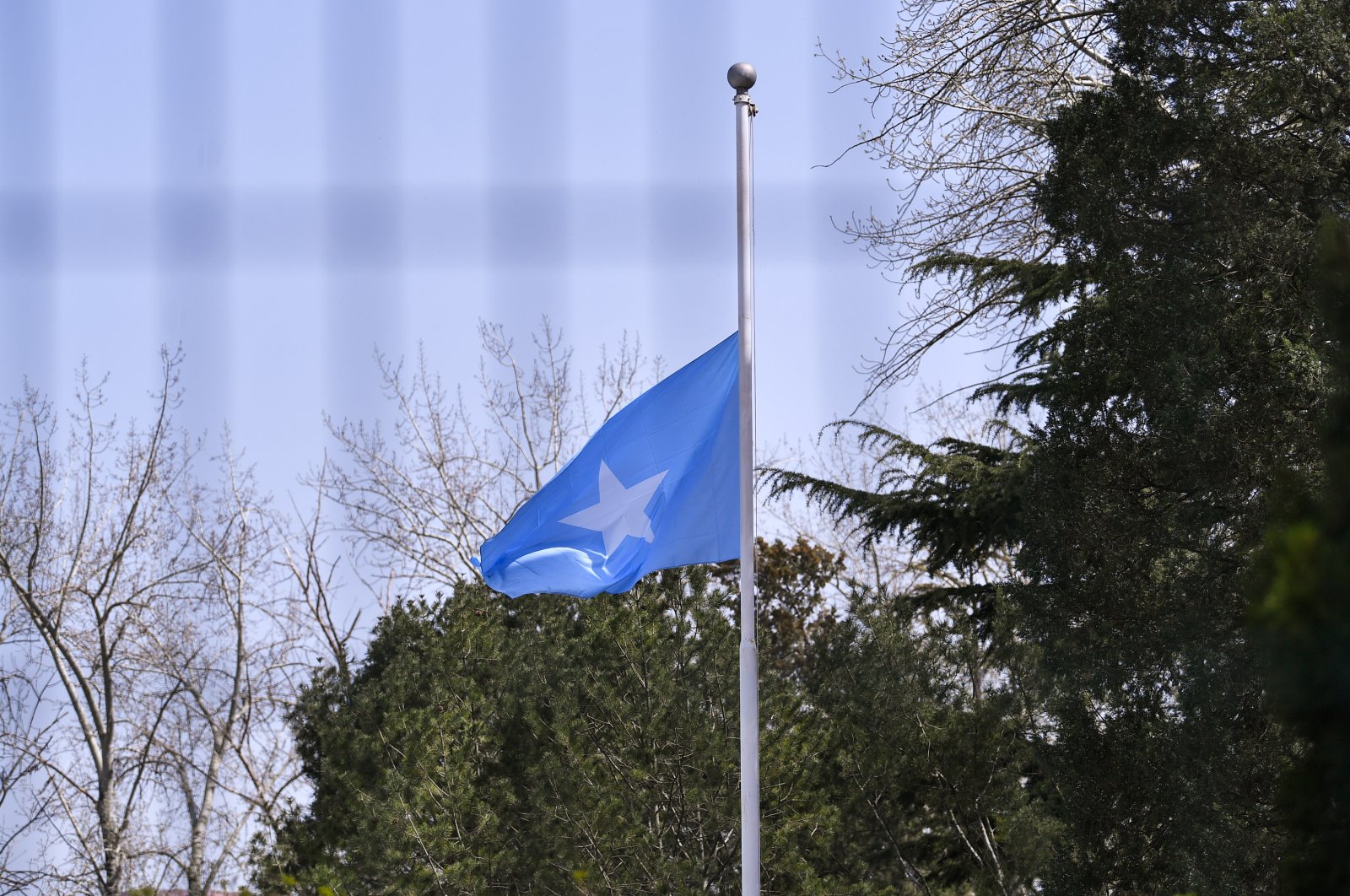 A Somalia flag is lowered to half mast to mourn for the martyrs who died in the fight of COVID-19 in the Somalia embassy in Beijing, China, April 4, 2020. (Reuters Photo)
by Mohamed Salah Ahmed May 22, 2020 12:05 am
RECOMMENDED

The COIVD-19 outbreak first begun in Wuhan, China but has swiftly spread all around the world and led to the global economy's deterioration. Many pundits and analysts argue that after the pandemic, the world will change, new powers will rise and others will fade. If the West has been a role model for liberal democracy and economic growth, which has been based on a free market, in the post-pandemic times, this will no longer be the case. Others who managed the pandemic well and proved that their governance systems are far better and more effective than the Western system will rise to the occasion, dominate the global stage and inspire many countries to adopt their system willingly, unlike the West. This is what Kishore Mahbubani, a Singaporean scholar and former diplomat, wrote in The Economist. He stated that the bad management of the pandemic in most Western countries will leave deep wounds economically and politically, and most importantly, will damage the West’s role in international politics.

Although most of the world has already been losing confidence in the West and doubting their leadership to bring the world together when such tragedies hit, their bad performance in dealing with the COVID-19 pandemic will only accelerate the power shift to new emerging powers. Most likely, the power shift will be toward East Asian countries that have witnessed massive economic growth for the last three decades. But what gives this debate more validity and soundness is how these developmentally driven systems have so far managed the pandemic better than the West.

On the other hand, proponents of western liberal democracy will disagree and argue that this is nothing more than an assumption. Proponents like Joseph S. Nye Jr., an American political scientist and co-founder of the international relations theory of neoliberalism, has noted in his opinion piece in Foreign Policy that COVID-19 will not alter the world order and we should not believe such claims that the pandemic will reshape everything. He continues by asserting that China will gain nothing from the pandemic and the U.S. will hold onto its position as a preeminent.

However, if there is a slight chance his prediction could happen, it will all depend on the U.S policy toward the pandemic. If the U.S. chooses the cooperative method over isolation, then the pandemic will lead us to a better situation in global politics, but if the U.S. continues to pursue its present policies and strategies, then the pandemic will steer many countries toward the path of nationalism and authoritarianism. Realistically speaking, it is way too early to forecast such geopolitical changes that would impact the global order long-term.

Nevertheless, the debate surrounding the world order and possibilities of a power shift from West to East has been going on for a while, but this pandemic has reenergized and renewed the uproar for geopolitical change and its global implications. To be realistic, the West has been dominant since the end of World War II and exported its political values, cultural principles and economic standards to the rest of the world.

In fact, wars have been waged in the name of the fight against terrorism and national security, and states have been dismantled and reshaped to build ones that resemble Western states in the late 20th century and the beginning of the 21st century. This is because of the West’s perception of failed states, as they portray them as major security threats to international security and global order. Countries like Iraq, Afghanistan and Somalia are good examples of this. However, as this pandemic is supposedly reshaping the global political order, one question that is worth asking is how COVID-19 will impact state-building projects carried out by the West in conflict-affected environments like Somalia. Specifically, will the crisis in the global economy, particularly in Europe and the U.S., which plays a critical role in funding the state-building mission, stop them from sponsoring failed states?

The collapse of the Barre regime in 1991 was followed by a bloody civil war among clans which caused a severe humanitarian crisis that caught the mainstream media headlines. Since then, Somalia has been seeing state reconstruction intended to revive the distorted government institutions carried out and sponsored by the international community and heavily dependent on Western funds. But the ambitious state-building project of the international community has been struggling to successfully reconstruct the collapsed state of Somalia as a basis for long-term security and development.

The process has definitely failed to create inclusive national reconciliation, bring about political stability or stimulate economic development as a foundation for successful post-civil war state-building. Instead, the current state institutions are more notable for their economic fragility and dependence on international financial sponsorship than for promoting strategic national policies that will lead to economic autonomy. In fact, the lack of political development and economic growth have been identified as a significant factor behind state fragility and the resurgence of violence.

As a matter of fact, the current dysfunctional state institutions are critically dependent on aid to survive. For example, as indicated in the annual report of the ministry of planning, investment and economic development of the federal government, Somalia received more than $2 billion of official development assistance (ODA) in 2017 and 2018. This is a 57% increase in aid meant for development compared to the last five years, indeed illustrating Somalia’s extreme dependence on foreign funds.

In fact, this is not a contemporary problem; the post-colonial state was also dependent on foreign aid. For instance, in the first three years of independence, 31% of the government’s budget came from donations given by its former colonizers Britain and Italy. Furthermore, when the military regime came to power, aid dependence continued as the regime received financial and technical support from its only sponsor, the Soviet Union. However, after its relationship with the Soviet Union shattered, the military regime replaced its financial losses with aid granted by the U.S., Saudi Arabia and Europe.

The fact of the matter is that Somalia’s reliance on aid has been growing for the last decade, while the government has been slightly reviving domestic revenue. But most of the ongoing activities, including the limited services delivered by the federal government and states, are funded with aid granted by the international community. To be realistic, it seems that federal government institutions are structured to be dependent on aid, and despite the substantial financial aid that the international community spends on rebuilding the state of Somalia, the ongoing post-civil state-building project has failed miserably to provide physical and economic security for its citizens.

The future of state-building

Since this deadly pandemic emerged, the global economy has been at risk and many economists have forecasted an economic recession worse than the global recession of 2008. Moreover, the big economies in the West have suffered punitively while the unemployment rate has risen to its highest peak globally. It is known to everyone that big economies including Europe and the U.S. make an enormous contribution to the United Nations and international financial organizations, which are the leading actors of the so-called state reconstruction projects in fragile states and conflict-affected zones.

In other words, they are playing a key role in funding some of the efforts taking place in these fragile states, including Somalia. For example, as aid flows in, Somalia reported in 2018 that foreign aid averaged 27% of the country’s gross domestic product (GDP). This indeed describes how crucial aid is for Somalia and its efforts to strengthen the fragile state institutions to provide proper economic and physical security to its citizens. This is not only the case for Somalia but most fragile states that the U.N. and international financial organizations are involved in – countries like Afghanistan, South Sudan, Iraq and others.

Of course, the economic misfortunes of these countries due to the pandemic will indeed reshape their local politics and priorities. Many will question the very basic idea of global solidarity, and instead, nationalism and political views will prevail. The debate surrounding why aid is given to outsiders while there are needs of our people locally will reemerge powerfully again. The idea of "us" vs. "the other" will unquestionably undermine global solidarity and morality and dominate the public discussions of these countries.

In fact, the post-COVID-19 international system holds a very uncertain future for fragile countries and efforts to rebuild states and strengthen the relationship between state and society with foreign aid granted mostly by the West. Factually speaking, the reduction of aid will be inevitable and donors will suspend most of their projects in fragile states with respect to peace-building, democratization and institutionalization. But what is unclear is to what extent Western donors will reduce their foreign aid toward fragile zones.

If the level of aid reduction is uncertain, what is certain and crystal clear is that these fragile states, including Somalia, stand no chance to hold themselves together and continue operating without the help of external actors – particularly the foreign aid granted by large Western economies. If this happens and Western donors reduce their aid for conflict-affected areas and fragile states, these countries will need other sources of income. East Asian countries do not seem to be filling such gaps, so what is the alternative?

Promoting the rebuilding of the local economy and domestic revenue will be a plausible option, one that will serve the long-term strategy of state survival for these countries. Aid will no longer play the role of savior in these countries. Countries like Somalia and South Sudan, where political stability is fragile and state institutions are weak, would need to come up with locally initiated policies and strategies to stimulate the economy, reduce poverty and strengthen institutions. That is their only hope. Of course, the post-COVID-19 period will be difficult for Somalia and other similar countries, but it also represents a greater opportunity for its leaders to unite and work together to develop political and economic policies driven by self-esteem and autonomy.