‘The forgotten genocide is repeated’: The Srebrenica tragedy 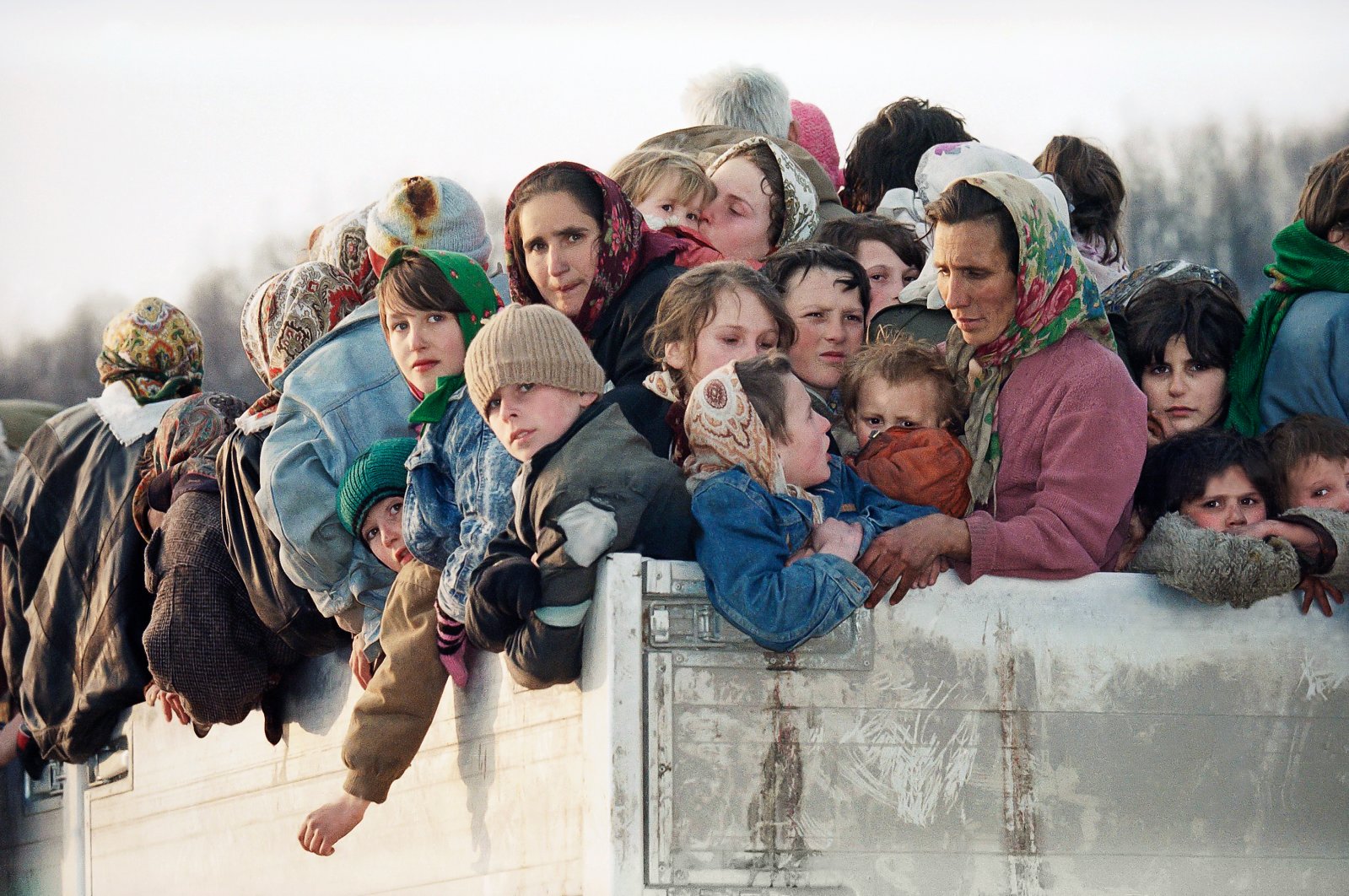 Evacuees from the besieged Muslim enclave of Srebrenica, packed on a truck en route to Bosnian city of Tuzla, pass through the Tojsici village, March 29, 1993. (AP Photo)
by Meltem Sarsılmaz Jul 15, 2020 12:05 am
RECOMMENDED

The American psychologist Daniel L. Schacter says in his book, “How the Mind Forgets and Remembers,” that “one of the most basic functions of many types of memory is that it helps us prepare for the future.” Even if societies do not experience the same events at the same time, the collective memory they have created for generations is transferred.
In terms of not forgetting the past while building today, this very collective memory is significant. In other words, it both helps to build today and offers the opportunity to face the past. What is important here is not to have an event at the same time, to share the past information and create a common image about our past.
It can be said that for societies and communities, rather than living together, remembering together is the essence of presence. Remembering together is performed by various methods such as the commemoration ceremonies in particular. During religious days, holidays or special days, there are some rituals belonging to communities. The key code in transferring something to the next generation through collective memory is “to remember.” Physical practices in memorials, for example, can be defined as what leads to the revitalization of the past. With rituals in ceremonies, the act of remembering is fulfilled and the collective memory, therefore, remains alive. In a contrary scenario, where the rituals or ceremonies are abandoned or the past is totally forgotten, building today or the future would be almost impossible to achieve. Likewise, Alija Izetbegovic, the late legendary Bosnia-Herzegovina leader, said, “don’t forget the genocide, whatever you do. Because the forgotten genocide is repeated.”
Genocide in Europe
Some 25 years ago, at the heart of Europe, a horrible genocide took place. The Srebrenica genocide, the greatest humanity massacre in Europe after World War II, occurred in the last 10 years of the 20th century. A brutal, inhumane and fearful moment for not the Bosnian people but the rest of the whole world...
The bodies are still removed from mass graveyards, showing us the brutality experience, again and again, every year. This inhumane memory is conveyed to future generations by remembering the incident with the memorials and peace marches held every year.
Srebrenica, a geopolitically important town, was occupied by Bosnian Serb forces after a long resistance. In 1993, the United Nations declared Srebrenica a safe zone for Bosniaks, so they seized the weapons of Bosniaks. The Bosniaks, fleeing from the attacks and brutality of the Serbs, also took refuge around Srebrenica. Its population, which was normally 5,000, increased to 20,000.
Upon the occupation of Serbian soldiers, a group chose to go to Tuzla, the third-largest city of Bosnia and Herzegovina, crossing the mountains.
The remaining thousands of Bosniak men, women and children set out to take shelter at the United Nations Peace Corps headquarters in Potocari, just outside Srebrenica.
The Bosniaks, who came to the headquarters under the control of Dutch soldiers, were told that Dutch soldiers can only take 5,000 people. Some of the remaining 10,000 people went to Tuzla, while others fell into the hands of Serbian soldiers.
Although the Dutch said they would provide safety for the refugees at the headquarters, they handed over thousands of Bosniaks after the Serbs sieged the headquarters.
On July 13, 1995, the Bosniaks did not agree to evacuate the headquarters, but the Dutch left the Bosniaks to the mercy of Serbian soldiers. There was no news from the Bosniaks that were put on trucks that day.
It was learned later that all of them were shot with their hands tied from behind. Around 8,000 people were killed just because of their ethnicity at that time. Even 25 years after the genocide, people are still looking for the remains of their loved ones under the ground.
While 6,643 victims have been buried in the memorial cemetery to date, more than a thousand victims have not been found, even after 25 years.
Every year on July 11, the identities of the genocide victims, whose bodies are found in mass graves, are confirmed, and then the burial takes place. Bosnians remember the people they lost every year so the prosecution is not forgotten.
As I said at the beginning, it is very important not to forget and to remember. Social memory plays a major role in our identities and memorials are of great importance in this recall. Bosniaks hold commemoration ceremonies every year on these dates. One of them is the burial of Bosniaks, who were massacred in the genocide and later identified. The nine Bosniaks, whose identities were determined in the 25th year of the genocide and approved by their family, were buried on July 11 at the Potocari Memorial Cemetery.
‘The Peace March’
Another commemoration ceremony is the “Peace March,” which is traditionally performed on the route used by Bosniaks who want to escape from the Srebrenica Genocide to reach Tuzla, a safe area by using the forest road.
The annual march involves retracing the 100-kilometer route of Bosniaks who fled the town of Nezuk in 1995 to escape Serbian persecution.
We have talked about how important these memorials, which we can define as ceremonial revitalization, shape the memory of society.

At this point, the media also has a number of duties, as it is powerful enough to remind the past and help shape the future in a better way. The horrible moments 25 years ago must stay in memories of the next generations, in order not to experience such a tragedy again.
If one day your path falls in Bosnia and Herzegovina, don’t forget the significance of the lettering on the walls. I want to conclude with the words of Alija Izetbegovic, “Nobody should pursue revenge, only seek justice. Because it opens the door of evil without end of revenge. Remember the past but don’t live with it either.”
*DS staff member, master’s degree from Communications Department at Marmara University