The future of Ibrahimi Mosque in danger 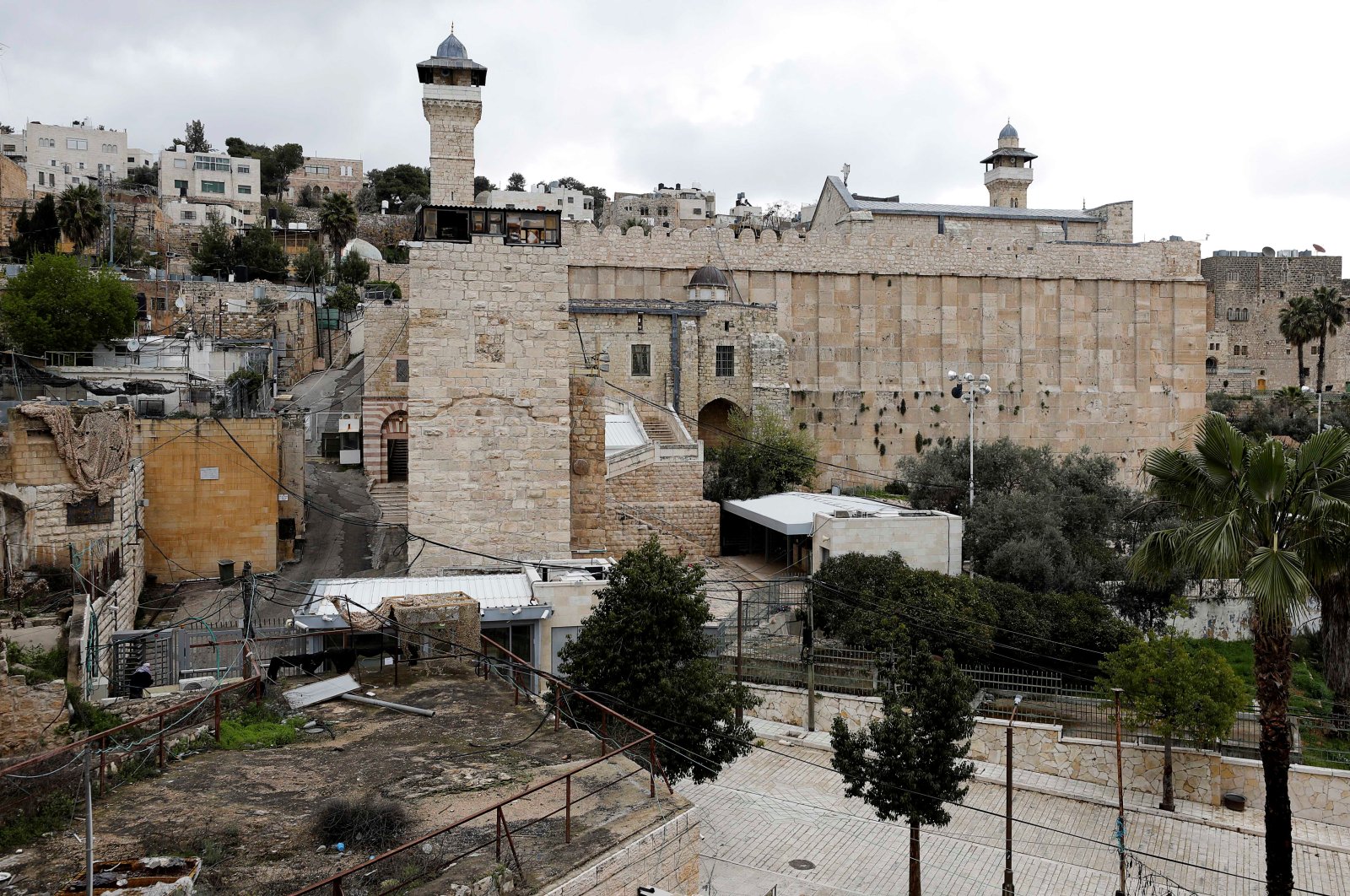 The Ibrahimi Mosque seen closed during a Friday prayer over concerns of the spread of the coronavirus, in Hebron, in the Israeli-occupied West Bank, March 20, 2020. (Reuters Photo)
by Najla M. Shahwan Jun 09, 2020 12:05 am

The Israeli annexation is deep, dark and dim, spreading insecurity and instability across the West Bank. The Ibrahimi Mosque is just one of the symbols of it

In a provocative, irresponsible step and amid the world’s struggle with the coronavirus pandemic, the Israeli occupation authorities announced recently a new settlement plan to capture the lands surrounding the Ibrahimi Mosque in the occupied city of Hebron in the southern West Bank.

Attorney-General Avichai Mandelblit approved the confiscation of the Palestinian land belonging to the Islamic Waqf, a trust in charge of religious endowments in the area of the Ibrahimi Mosque.

Israel’s Ministry of Justice said in a statement that the decision was made in collaboration with the Civil Administration, a military-led body tasked with handling agricultural and building permits, roads, water and electricity issues in the West Bank.

Israeli authorities have justified the expropriation in order to build an elevator and ramp to allow people with disabilities, including tourists and Jewish worshippers, to access the holy site.

An old wholesale market on Shuhada Street owned by the Palestinian municipality of Hebron is also set to be seized to make room for the controversial project.

Hanan Ashrawi, a member of the executive committee of the Palestine Liberation Organization (PLO), said in a statement, “It is a cynical exploitation of the world’s focus on combating the COVID-19 pandemic and a reflection of Israel’s willful determination to speedily execute its aggressive plans to the service and benefit of the colonial settlement regime that is devouring Palestine.”

Israel has steadily taken control of the mosque to facilitate worship by the small group of illegal Jewish settlers who have moved into the center of the Old City at the expense of the indigenous Palestinian inhabitants. Access to the mosque for Muslim worship is controlled tightly by the occupation authorities and, on many occasions, is banned altogether.

In past years, the call to prayer was prevented at the Muslim holy site, while Israeli authorities closed the Ibrahimi Mosque to Muslim worshippers for different Jewish holidays like Rosh Hashanah and Yom Kippur.

Hebron is one of the most populated Palestinian cities in the West Bank with around 200,000 Palestinians, including 30,000 in the Old City.

In an unusual and illegal measure, almost 800 Israeli settlers currently live in the heart of the city under heavy military guard.

The old city, including the Ibrahimi Mosque, has been listed as a UNESCO World Heritage site since 2017 and is considered a threatened site.

The Ibrahimi Mosque, believed to be the burial place of the Prophet Ibrahim, is sacred to both Muslims and Jews and has been the site of oft-violent tensions for decades.

Al-Haram al-Ibrahimi is located at the southeast corner of modern Hebron and in the heart of its old town. It is considered the fourth holiest site in Islam and the second holiest site in Palestine. Historical evidence suggests that the Prophet Ibrahim (Abraham) resided in Hebron approximately 4,000 years ago. He chose Hebron as a burial place for his wife Sarah, and later for himself, his son Isaac, his grandson Jacob and their wives. According to some sources, it also houses the tomb of Joseph.

The Ibrahimi Mosque was built within an enclosure originally constructed by Herod the Great, who ruled over Palestine during the early Roman period between 37 and 4 B.C. It was built with large drafted ashlars, the largest is 7.5 by 1.4 meters (24.6 by 4.6 feet), and is 15 meters high. During the Byzantine period, a church was probably built inside the enclosure and later destroyed during the Persian invasion of Palestine in A.D. 614. In the early Islamic period, a mosque was built inside the enclosure. Under Islamic rule, the Ibrahimi Mosque was given special attention, and the cenotaphs of the prophets were constructed and richly decorated with green tapestries embroidered with verses of the Quran and other pious inscriptions. During this period, Hebron became the fourth holiest city in the Islamic world and a spiritual terminal for pilgrims and tourists worldwide. Successive Arab Muslim rulers, scholars and visitors glorified and sanctified the Ibrahimi Mosque in the city of Hebron.

During the Crusader Period between 1099 and 1187, a church was built inside the Herodian enclosure and named the Citadel of Saint Abraham. In 1187, Saladin al-Ayyubi drove out the Crusaders from Hebron and converted the church into a mosque. He installed the Pulpit of Asqalan, which is now considered a rare wooden artifact. Later, four square minarets were added to the mosque, of which only those at the northeast and northwest corners remain to this day.

In 1967, the Israeli military forces took control of the city of Hebron and the Ibrahimi Mosque.

On Feb. 25, 1994, a Jewish settler killed at least 29 Palestinians and wounded 150 others, spraying them with automatic rifle fire as they knelt together in prayer at the Ibrahimi Mosque in Hebron.

The gunman, Dr. Baruch Goldstein, a 37-year-old Israeli settler resident of Qiryat Arba settlement, opened fire on the Muslim worshipers at dawn where they gathered to offer prayers as part of Ramadan, the Muslim holy month of fasting.

The Brooklyn-born settler, a follower of the anti-Arab Rabbi Meir Kahane, was apparently beaten to death by the worshipers after they overcame his initial attack.

The massacre ignited Palestinian rioting and clashes with Israeli soldiers that claimed about 10 Arab lives elsewhere in Hebron and other parts of the Palestinian-occupied territories.

It was unclear whether Goldstein acted alone or not as according to some reports, he had entered the mosque in the uniform of an Israeli army reserve soldier, thus getting past soldiers who were posted outside during the Ramadan prayers, which coincided that day with the Jewish holiday of Purim, which celebrates the delivery of the Jews from a Persian plot.

Some Palestinian survivors who were among the several hundred worshipers and were jammed together in prayer – row after row of bowed heads – said that they had heard both rifle shots and grenade explosions coming from different directions, suggesting multiple attackers.

Some also charged that Israeli soldiers were slow to react, describing the horror as having lasting around 15 minutes. A few went so far as to accuse the Israeli army of having been a part of the plot.

Following the massacre, the Israeli government imposed a series of security measures across occupied Hebron. The Ibrahimi Mosque itself was divided, with Muslim access reduced from the entire space to around 40% of the site. The other 60% was allocated to Jewish worshippers, who accessed the site from a separate entrance.

Parts of the city close to Israeli settlements were closed off to Palestinian residents, including the economic center of Shuhada Street. Checkpoints were set up around the entrance to the mosque, manned by Israeli soldiers.

At the same time, Palestinians in areas in the heart of Hebron where settlers had set up illegal bases were restricted in movement, and shops were forced to shut down. Entire streets became closed off to Palestinians although Jewish settlers were allowed to roam them freely and under heavy army protection.

This situation is ongoing today, and it has become even worse.

Today, Israeli military authorities deny Palestinians access to large parts of the mosque and have installed electronic gates at its entrances.

The Israeli occupation authorities are accelerating the implementation of settlement building plans in the occupied Palestinian territories in flagrant defiance of international laws and international legitimacy resolutions.

Last December, Israel approved the expansion of the settlements inside Hebron, including the construction of 70 new housing units that could double the settler population in the city.

These settlement plans come within the framework of implementing the so-called U.S.-backed “deal of the century” with the aim of liquidating the Palestinian cause.

The annexation plan has been met with wide Palestinian, Arab and international condemnation.

The U.N. Special Coordinator for the Middle East Nikolai Mladinov has warned that any possible annexation of Palestinian lands to the occupation entity will be a destructive hit to the project of establishing an independent Palestinian state.

Most of the Security Council member states have recently reaffirmed their rejection of the Israeli annexation plans and of any plans that undermine establishing the Palestinian state on the borders of June 4, 1967.