The ongoing struggle of Palestinian women 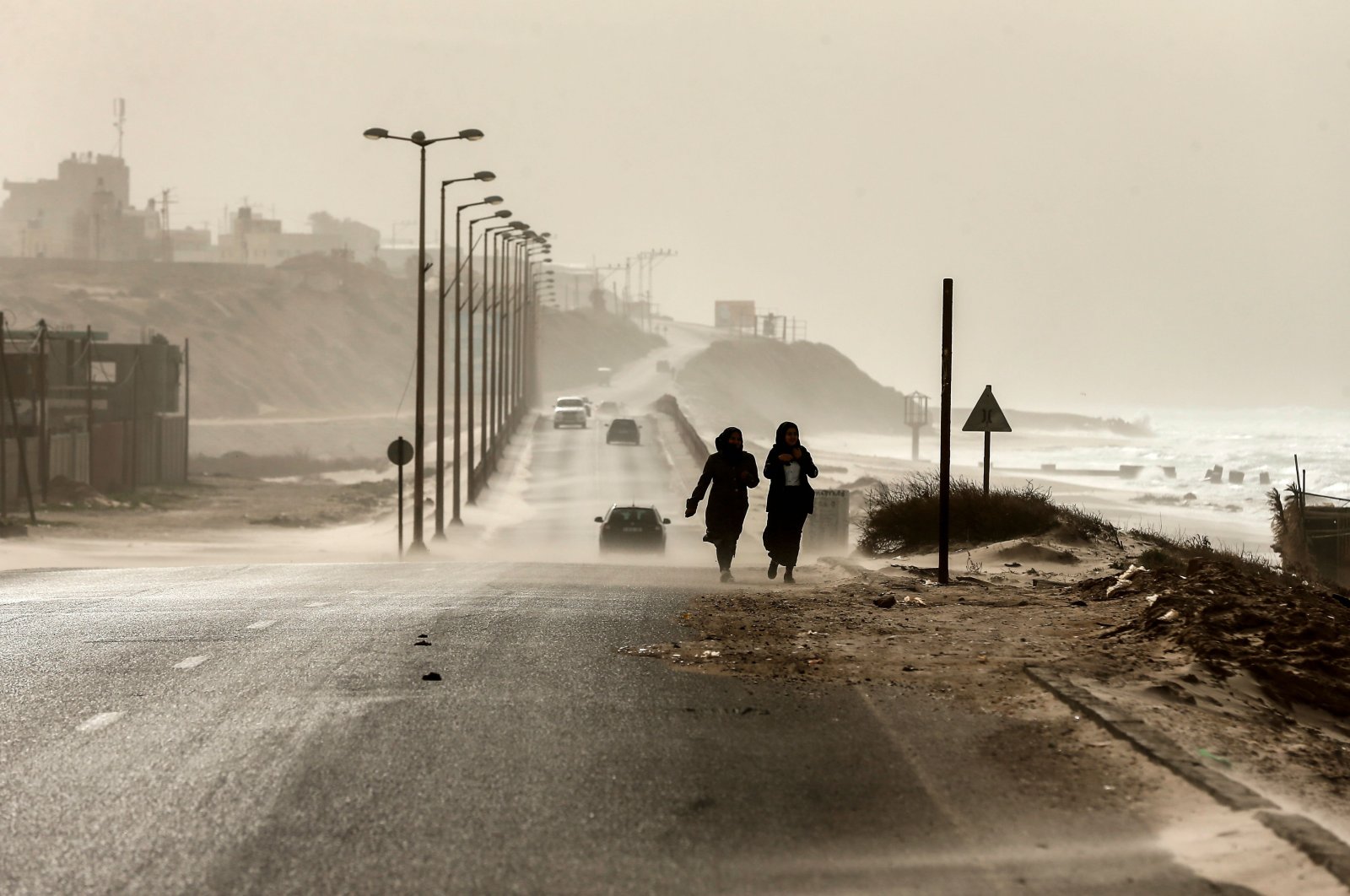 As the world celebrated Women's Day on March 8, Palestinian women continued to struggle for their rights and gender equality, which have been restricted by two main interrelated forces: the Israeli occupation and internal patriarchal control.

Throughout the past decades, Palestinian women activists have been fighting simultaneously on two fronts – for political (national) and social (gender) liberation while remaining skeptical of a feminist agenda that primarily focuses on individual and social gender empowerment, instead insisting that gender inequality in their context stems not only from patriarchal oppression but from poverty, economic dependency, continued political violence, insecurity and instability caused by the long-lasting Israeli occupation, siege and settler-colonial policies.

Such policies of spatial control had a severely damaging impact on the Palestinian economy, society, family and kinship organization besides women’s activism.

Palestinian women are not only divided geographically between – and within – the West Bank, Gaza, East Jerusalem and the diaspora, but, more importantly, their contexts and predicaments are widely varying: refugees, West Bank and Gaza "citizens," East Jerusalemites and Palestinians with Israeli citizenship all have different access to rights.

Women’s rights in Palestine thus cannot be dealt with in isolation; the impact that the occupation and political conflict have on women’s legal, social, cultural, educational, economic and political status is crucial when looking for possible strategies to empower women. This is not to say that patriarchal structures and cultures are not a major concern for Palestinian women’s activists. On the contrary, it highlights that women’s empowerment in the Palestinian context and their struggle for equal rights are closely linked to their political and economic empowerment which can only be achieved by ending the Israeli occupation.

Despite the restrictions placed on them, Palestinian women have embraced roles other than that of a victim. From the beginning of the 20th century, what may be termed "resistance" activities by women have evolved through various stages.

These began as charitable and social-welfare work by a small group of upper- and middle-class women.

After 1918, when Britain obtained the mandate for Palestine, women started to take part in demonstrations against British policies, establishing and often organizing militant movements that were actively involved in social, political and national affairs.

After the 1948 "catastrophe," the majority of Palestinians had to leave their homeland.

The loss of country and home and the designation of refugee status were generally accompanied by the loss of a loved one in the family.

On the other hand, in terms of empowerment, the refugee camps provided women with a new set of roles struggling to keep their families together, to maintain their fragile sense of identity and to respond to the many hardships of everyday life.

Palestinians in exile realized the vital importance of education – for girls as well as boys – and as they became better educated, women started to participate in the embryonic resistance movement.

The PLO was founded in 1964, and under its umbrella, the General Union of Palestinian Women (GUPW) was created in 1965. However, although barriers between the sexes began to break down, traditional values continued to play a central role.

The 1967 Israeli occupation brought the Palestinians of the West Bank and Gaza Strip into more intimate proximity with those who had taken their land. Suddenly the Israelis were in Palestinian villages, on Palestinian streets, and even in Palestinian homes, which inevitably had a profound effect on women as they suffered physical and psychological violation. From the early days of the occupation, women had no choice but to confront the Israeli military authorities.

They protested against the seizure of Palestinian land, the demolition of houses, the ill-treatment of their children and in response, they were arrested, imprisoned and sometimes physically abused by the occupying forces.

Although one side effect of the occupation was growth in feminist consciousness among certain sections of society, women were still expected to occupy a traditional place in society. Even though few women became fighters, some turned to political activism, and many others contributed to the resistance.

In many ways, this period marked an important transition for women. While conservative attitudes certainly did not disappear and life undoubtedly became more difficult in many respects, opportunities for women increased.

The Palestinian uprising – or intifada – which began at the end of 1987, witnessed the Palestinian residents of the West Bank and Gaza Strip making a concerted effort to resist Israeli occupation – politically, economically and culturally.

The intifada started as a display of spontaneous anger and a reassertion of national dignity and has been described as an attempt by the young armed only with stones and facing death and pain.

The effects it had on Palestinian women were mixed, and their responses and activities can be divided into several phases. Although they added their efforts to the general communal rejection of the occupation, women also experienced victimization both by the enemy and their own society.

Decades later images of women and girls throwing stones, challenging soldiers and leading marches during the First Intifada showed promising signs of social restructuring. Women’s groups were solidifying their involvement in social works and political organizing during this period. This allowed women to move outside their homes under the pretext of the struggle, bringing them into spaces previously limited to males, such as the arrangement of political meetings and the leadership of demonstrations.

Until date and after 53 years of occupation, mainly women and children are paying the daily price for this vicious cycle of retaliation and counter-retaliation.

In addition to the deprivation of their right to life, freedom of movement, liberty and security, Israel continues to implement a range of discriminatory laws, policies and practices that feed into Israel's broader annexation strategy and intent to diminish the presence of the Palestinian population, including women, particularly in Jerusalem and Area C of the West Bank. Such laws and practices include discriminatory citizenship and residency laws, restrictions on family unification and administrative home demolitions, alongside increased measures of collective punishment, such as punitive residency revocations and punitive home demolitions.

Palestinian feminist and human rights movements have registered several important achievements over the past years in terms of addressing legal and structural discrimination and advancing democracy. These achievements include the amendment of the Palestinian Elections Law, securing a 20% quota representation in local councils and the Legislative Council, and the ratification without reservations of the Convention on the Elimination of all Forms of Discrimination Against Women.

Despite these achievements, however, gender disparities remain significant in numerous aspects of life, including political participation and access to decision-making positions, resulting in discrimination against women in terms of access to opportunity.

Discrimination against women within this framework refers to “any distinction, exclusion or restriction made based on sex which has the effect or purpose of impairing or nullifying the recognition, enjoyment or exercise by women, irrespective of their marital status, on a basis of equality of men and women, of human rights and fundamental freedoms in the political, economic, social, cultural, civil or any other field.

The current inclusion of women within institutional Palestinian politics in the West Bank and Gaza Strip remains small. Although the Palestinian Legislative Council has maintained a 20% quota of women since 2006 – a development Palestinian activists and women’s organizations fought hard for – the percentage remains modest. Moreover, other bodies have even lower proportions of inclusion.

Of the PLO Executive Council’s 15 members, only one is female, and out of the 16 governorates in the West Bank and Gaza, only the governorates of Ramallah and el Bireh have a female governor. Similarly, the government as of April 2019 has a mere three female cabinet ministers out of 22.

Since 1967, more than 17,000 women have been held in Israeli jails, including 36 women who are still in prison and another 47 awaiting trial.

The arrest of women intensified over the past two years, especially at the Al-Aqsa Mosque compound.

The number of child prisoners in Israeli jails currently stands at 250, including 41 children from Jerusalem – 36 of whom are under house arrest and five are minors held in “shelters.” The number of administrative prisoners is about 500, including men and women, while there are 700 prisoners who are suffering from illnesses, including 30 cancer patients.

In 2019, the Israeli occupation authorities arrested about 1,600 Palestinians, the majority from Jerusalem, including about 230 children and 40 women.

Women prisoners suffer unbearable living conditions in Israeli prisons, deprived entirely of basic human rights, including the right to privacy and the right to education.

During imprisonment, Palestinian women are often subjected to gendered violence in an attempt to “break” them.

Without ending the political and economic repression and de-development exercised by the Israeli occupation and settler-colonial policies, Palestinian women’s rights and gender equality will most probably continue to be restricted. Women’s social and cultural empowerment can only progress once women’s economic and political position is strengthened. Unachieved national rights thus remain a major hindrance to fulfilling women’s rights in Palestine today.

More immediately, Israel must be held to comply with international law, such as the 4th Geneva Convention, international humanitarian law, human rights and relevant U.N. resolutions. Women’s economic, social, political and cultural rights under conflict must be guaranteed and protected, and family reunifications need to be processed and implemented. Aside from alleviating the heavy restrictions placed on women’s freedom through the occupation and concerning Palestinian internal reform, efforts should be targeted at the level of the law, the labor market, education, political representation, health and cultural norms.

Such efforts, if carried out carefully and in a culturally sensitive way, can be a first step toward changing cultural norms that reinforce patriarchal structures and a subordinate position of women in society, and thus toward constructing alternative gender models in Palestine.