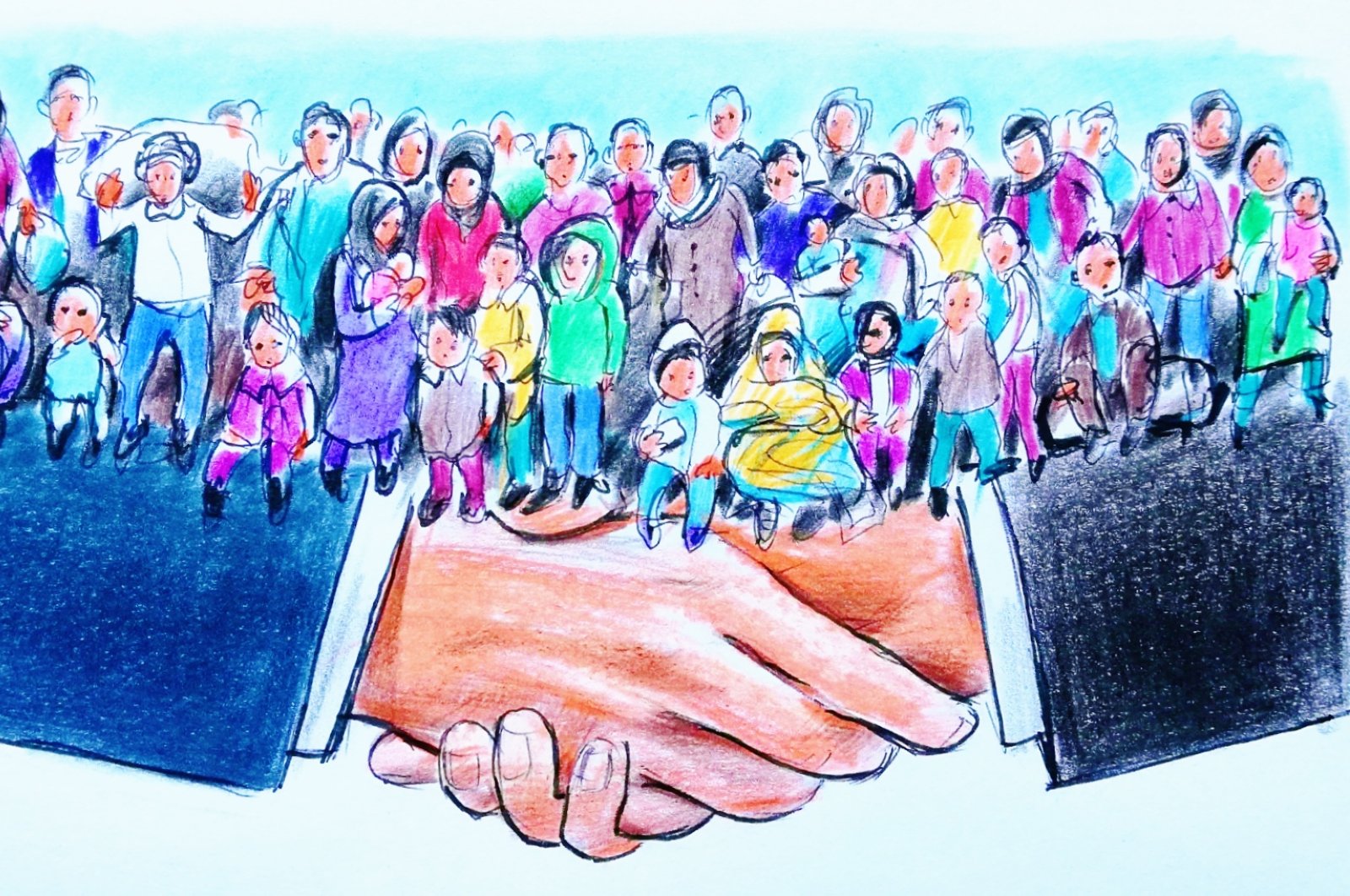 Over the past few weeks alarms regarding the growing coronavirus outbreak have competed with news on the perilous escalation in northwestern Syria. It has brought into focus once again how vulnerable the global world is to the dangers of war and contagious diseases.
While the brightest medical minds search relentlessly to find a remedy for COVID-19, Turkey and Russia managed once again to stop the unfolding of a major Syrian crisis. After six hours of intense negotiations on March 5 in Moscow, the parties signed a joint declaration to envisage establishing an immediate cease-fire in the Idlib de-escalation zone, a security buffer zone to the north and south from the M4 highway and the start of Turkey-Russia joint patrols to commence on March 15.
In February, the conflict over the past three years, seeming to heading toward a resolution, took a sharp turn for the worse when the regime forces intensified their military advance in the Idlib de-escalation zone to gravely impact the relations of Turkey and Russia, two of the three Astana process guarantors.
Sharp rhetoric at the highest Turkey-Russia level, heavy casualties, material losses on the ground in Syria and a diplomatic effort stalemate in Ankara have brought into global focus once again the deep-rooted nature of the Syrian tragedy and its nearly 10-year war, not to mention an unprecedented refugee crisis.
Astana value-added
Three years ago, in February 2017, in Kazakhstan’s frost-bitten capital of Nursultan, called Astana at that time, Turkey, Russia and Iran launched a joint initiative aimed at rejuvenating the helplessly deadlocked Geneva peace talks on Syria. Their effort produced a viable instrument tabbed the Astana process and in its framework, the countries assumed guarantor roles for a peace settlement in Syria. The guarantor countries declared their support for the Syrian sovereignty and territorial integrity and declared that no military solution to the conflict is possible. Besides creating an additional settlement format, the established tripartite alliance produced a viable peace driver and added a new dimension to the U.N.-launched peace process on Syria.
The Syrians, who joined the Astana process, have differed dramatically from the polished politicians representing the Syrian opposition in Geneva at the U.N.-sponsored talks. The warring field commanders making the Syrian military opposition and effectively controlling the situation on the ground sat down to negotiate the conflict resolution with the Bashar Assad regime. As such, the Astana process boosted the peace talks on Syria and produced shortly afterwards a concept of de-escalation zones as the means of cleansing the Syrian territory of Daesh and other terrorists.
From the moment of its launch, the Astana process revealed that after years of spiraling enmity and bloodshed, it was next to impossible to expect the Syrian resolution to progress quickly and smoothly. It has made it clear as well that the process was prone to facing stumbling blocks, pits and holes, particularly in the matter of a political solution. Over the past three years, it has become apparent more than once that compromise and political wisdom of the countries’ leaders coupled with consorted efforts on the ground are the only means for a balanced and mutually acceptable solution to the Syrian crisis.
The Astana process has laid down the nearly unique grounds for the Turkey-Russia interaction in Syria. Opposing each other on certain – occasionally core – issues, the countries brokered a resolution on the others. As such, Russia has remained a firm supporter of the ruling regime and Assad, who Turkey doesn’t believe has a place in the future of Syria and has thus strongly backed certain groups opposing him.
The situation in Idlib has most clearly revealed those conflicting specifics. President Recep Tayyip Erdoğan clarified them on July 14, 2019, by saying: "In order to prevent the regime's massacres in Idlib, like it has already done in various provinces, we've come up with a trilateral structure with Russia and Iran. Through cooperation with Russia on the ground, we've achieved stability in Idlib. Although the regime continues to violate the cease-fire, we continue to have unity with Russia over providing security in Idlib."
Of four de-escalation zones established in September 2017 to cover the Idlib province and certain parts of Latakia, Homs, Aleppo and Hama as well as Damascus, eastern Ghouta, Daraa and Quneitra, the Idlib region has always looked the most problematic. The core of the zone to cover certain parts of Hama, Latakia and Aleppo, the Idlib area is a major breadbasket of Syria. Traditionally agricultural and conservative, those parts of the country have never been happy with the Assad regime and served as the ground for radical sentiments. As such, the Idlib de-escalation zone came a year later controlled 85% by the radical Hayat Tahrir al-Sham (HTS) terrorist group, contrary to the bright expectations set by the Astana process guarantors in 2017.

Idlib factor
The aggravated situation prompted Turkey and Russia to sign on Sep. 17, 2018, the Sochi agreement that established the Idlib demilitarized zone of 15-20 kilometers deep in the de-escalation area and allowed for observation points for the Astana guarantors. A permanent cease-fire was envisaged for the zone and heavy arms and munition were to be withdrawn by Oct. 10, and the radical elements removed by Oct. 15. Likewise, transit traffic on the routes of the M4 highway between Aleppo and Latakia and the M5 connectıng Aleppo and Hama had to be restored by the end of 2018.

It seemed as though a breakthrough and a way out had been established. The Sochi deal was well understood to be a temporary instrument to build upon as a solid foundation for the conflict resolution in Syrian northwestern regions. Nevertheless, it never happened, and the situation in Idlib shortly spiraled out of control. The clashes on the ground, sporadic at first, between the opposition and the regime, had turned by spring 2019 into a military confrontation.
Regardless of the efforts contributed by the Astana process guarantors, the situation continued to deteriorate to reach the alarming point of confrontation by February 2020, when Turkey and Russia found themselves on the verge of a direct military conflict. Successful until then, the military diplomacy efforts have stopped working, and several rounds of the Turkey-Russia consultations in February 2020 fell short of an accomplished result.
The military confrontation between the Russia-backed regime forces and Turkey-supported opposition developed into a fierce fight with heavy casualties and material losses. It made a decisive response from Turkey inevitable and on March 1, Ankara launched Operation Spring Shield. “We have deployed additional military units to Syria to ensure regional stability,” Erdogan said regarding the operation that inflicted a heavy blow on the regime’s military capacity. As of March 4, Turkish forces had neutralized 3,136 regime elements, according to the Turkish Defense Ministry. Nevertheless, Turkey lost 60 servicemen in the course of the fighting in February.
Determined to prevent a major escalation in Idlib, the presidents of Turkey and Russia held a meeting in Moscow on March 5 that resulted in the continuation of cooperation to find a resolution for the Syrian crisis. At the end of the meeting, a joint declaration was signed to confirm inter alia their support for Syria’s sovereignty, independence and territorial integrity and combating terrorism.
They declared a cease-fire in Idlib “along the established contact zone” starting at midnight on March 6, 2020, buildup of a “security corridor” 6 kilometers to the south and 6 kilometers to the north of the M4 highway, whose details are to be worked out in a week, and the start of Turkey-Russian patrols of the M4 section between Trumba and Ain Al Havr starting on March 15.
Some analysts have interpreted the reached accords not as a resolution but as a start of a process to modify the agreements on the Idlib demilitarized zone. “Considering all the recent developments, a new status quo is inevitable in Idlib,” Erdogan said in the course of the March 5 meeting.
Special partners
The Turkey-Russia relations are more than 500 years old. Over the years, they have experienced intervention and hostility, rapprochement and friendship that have produced today's exclusive model of cooperation enriched inter alia with a trilateral mechanism on a peace settlement in Syria. While "our approach to certain developments may differ,” Russian President Vladimir Putin said in December 2014, “we clearly share a desire to resolve acute global conflicts.”
The recent developments in Idlib are a test for the Turkey-Russia relations' resilience. The Moscow accords of March 5, 2020, have revealed once again that agreements on Idlib remain standing as an instrument for offensive containment to prevent a humanitarian disaster. Likewise, the countries' leaders have reaffirmed their belief in the necessity to preserve the sovereignty, independence and territorial integrity of Syria while considering its division into zones of influence unacceptable. “We have always solved our problems by working together. Today was no different," Putin said by the end of the meeting.