The story of Silvia Romano and Turkey-Italy friendship 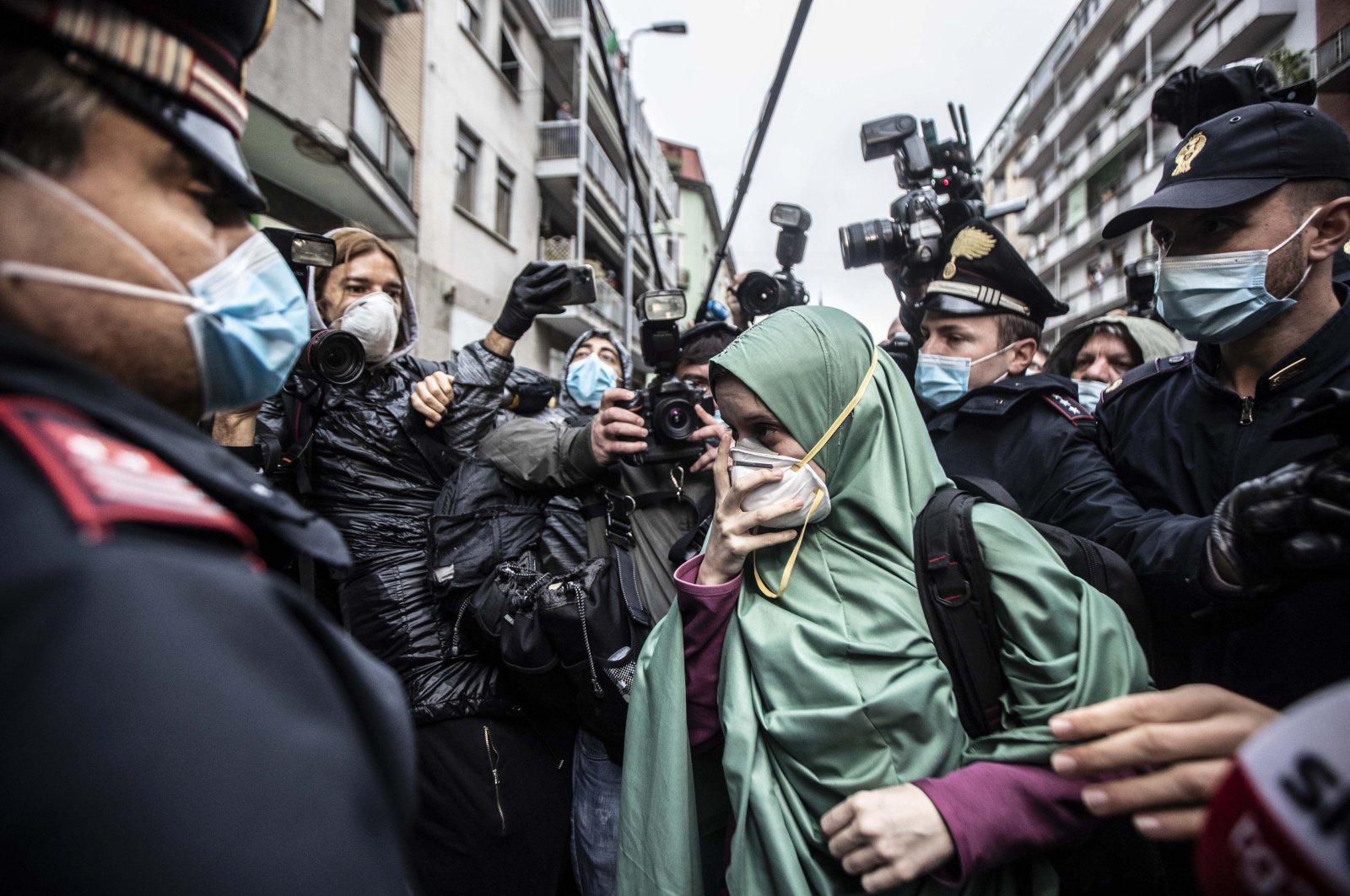 Silvia Romano, escorted by Carabinieri officers, arrives at her home wearing a green garment typical of Somali Muslim women and a surgical mask to guard against COVID-19, in Milan, Italy, May 11, 2020. (AP Photo)
by Valeria Gianotta May 21, 2020 12:05 am
RECOMMENDED

The release of Silvia Romano, the young Italian aid worker who was kidnapped in Kenya in November 2018, is something we have all been awaiting for almost two years. Finally, on May 9, thanks to the joint efforts of Italian and Turkish intelligence, Silvia Romano was rescued from Somalia. Indeed, Italy relied on Turkey to establish positive and decisive contacts in order to bring the young woman back home.

According to official sources, after one month of her imprisonment, Romano was led to Somalia, a land where Turkey is active in terms of soft power-based influence. Thanks to its historical and cultural connections, ties between Ankara and Mogadishu are very strong and pivot on several agreements. Turkish-Somali cooperation has been acted out in various fields, from military and defense to economy, education, health and social services.

In this framework, Turkey’s priority is the fight against terrorism and the stabilization process against the outlawed group al-Shabaab, an endeavor carried out also within the scope of the U.N. peace-building mission. Moreover, a contingent of 200 Turkish soldiers is working in the field to train around 10,000 Somali troops. Hence, it is not surprising that Italy has opted to give Turkey a mediating role. As has been often highlighted in these columns, Italy and Turkey are very good friends and their bilateral relations have deep historical roots. Furthermore, Rome and Ankara are two Mediterranean allies that work in close collaboration within NATO. They share interests and, to some extent, both have to deal with the same issues.

As security is a mutual concern, this collaboration has proved fruitful in terms of counterterrorism and the fight against illegal immigration and organized crime, as well as common efforts that have achieved great success against illicit drug and weapons trafficking. It is precisely in the light of this excellent partnership in terms of intelligence that has cemented ties by further sealing a positive bilateral momentum.

Recently, institutional contacts have taken place at various levels – between Turkish President Recep Tayyip Erdoğan and Italian Prime Minister Conte, as well as between Foreign Ministers Mevlüt Çavuşoğlu and Luigi Di Maio, both in person or via teleconference due to the COVID-19 pandemic. In this regard, as proof of the longstanding NATO cooperation both countries have embarked on, it is remarkable to consider the amount of medical aid sent to Italy, where the coronavirus caused record fatalities. Thus, the pandemic emergency has highlighted the power of partnerships as well as economic ties.

Certain protectionist measures have had a notable economic impact; with the decrease in supplies, a sort of stalemate situation has occurred, showing how the Italian-Turkish trade and industries are integrated. From a mere economic perspective, Italy stands as Turkey's second-largest European partner with $19.8 billion in total exchange.

Another notable factor is that Italy ranks fifth in terms of balanced bilateral trade, above countries such as Russia and China – which are Turkey's biggest global partners, with Italy's imports winning out over exports. According to the latest data revealed by the Turkish Statistic Institute (TurkStat), the total exchange for March-April 2020 was $4.5 billion; with $2.2 billion in imports from Turkey and nearly $2.3 billion in exports. In other words, all the above-mentioned elements confirm the essence of a win-win partnership.

Through constructive dialogue and by relying on each other, both Italy and Turkey achieve competitive advantages. Thanks to the mutuality and reciprocity of their interests, Ankara and Rome have proved to be capable of forgoing short-term interests in order to further their well-being. It comes that interdependence can develop further and facilitate international cooperation, as from a liberal perspective it is the only rational outcome to achieve long-term self-interests. As Turkish Trade Minister Ruhsar Pekcan recently stated, the key to recovery in the time of the coronavirus is cooperation, aiming at stressing the importance of Turkish economic proximity to Europe.

From this perspective, by pivoting on Italian-Turkish ties, relations with the European Union can be revitalized. Although there are some discrepancies on critical issues, Turkish humanitarian support and the more recent lift on some trade restrictions on one side and the Italian friendly approach to Turkish stances on the other prove that there is room for further benefits. In January, indeed, the Italian government rejected the joint declaration following the summit of the Greek Cyprus administration, Egypt, Greece and France on Libya and the Eastern Mediterranean held in Cairo.

Furthermore, Rome and Ankara support the U.N.-recognized government of Fayez al-Sarraj and, as both are promoters of the Berlin Conference. Italy has made an important contribution in channeling Turkish expectations to European tables. Along with the launch of the European Union's Operation IRINI, which was planned following a decision by the European Council within the scope of enforcing an arms embargo on Libya as part of a U.N. Security Council resolution, Italy can play a moderating role. In light of some of the stricter stances toward Turkey of some European states, such as Greece and Greek Cyprus, as well as more recent discrepancies, the Italian aim is to ensure a balanced operation, which would not only reflect Rome’s interests but also Turkey's expectations.

Furthermore, the already good economic-commercial relations can act as a driving force for strengthening cooperation in third countries and act as a facilitator for global issues. As is evident in Romano’s case, Turkey's presence in Africa confirms that close cooperation could be eventually achieved in far-reaching areas. In foreign affairs, by enhancing liberal policies and rejecting hegemonic positions, the increasingly cooperative approach accentuates mutual benefits and brings about fewer conflicts among countries.

However, interdependence is much more effective once states comply internally with democratic principles. In this regard, by working together to maximize mutual prosperity and interests, states avoid the risk of isolationism, loss of credibility and, ultimately, of internal instability, both political and economic.

Thus, despite some speculations, Turkey’s collaborative approach to Romano’s release is another concrete outcome of consolidating synergies as it signs a genuine interest in relaunching constructive global cooperation.

*Assistant professor at the University of the Turkish Aeronautical Association, Ankara