The West furthers its mess in the Middle East 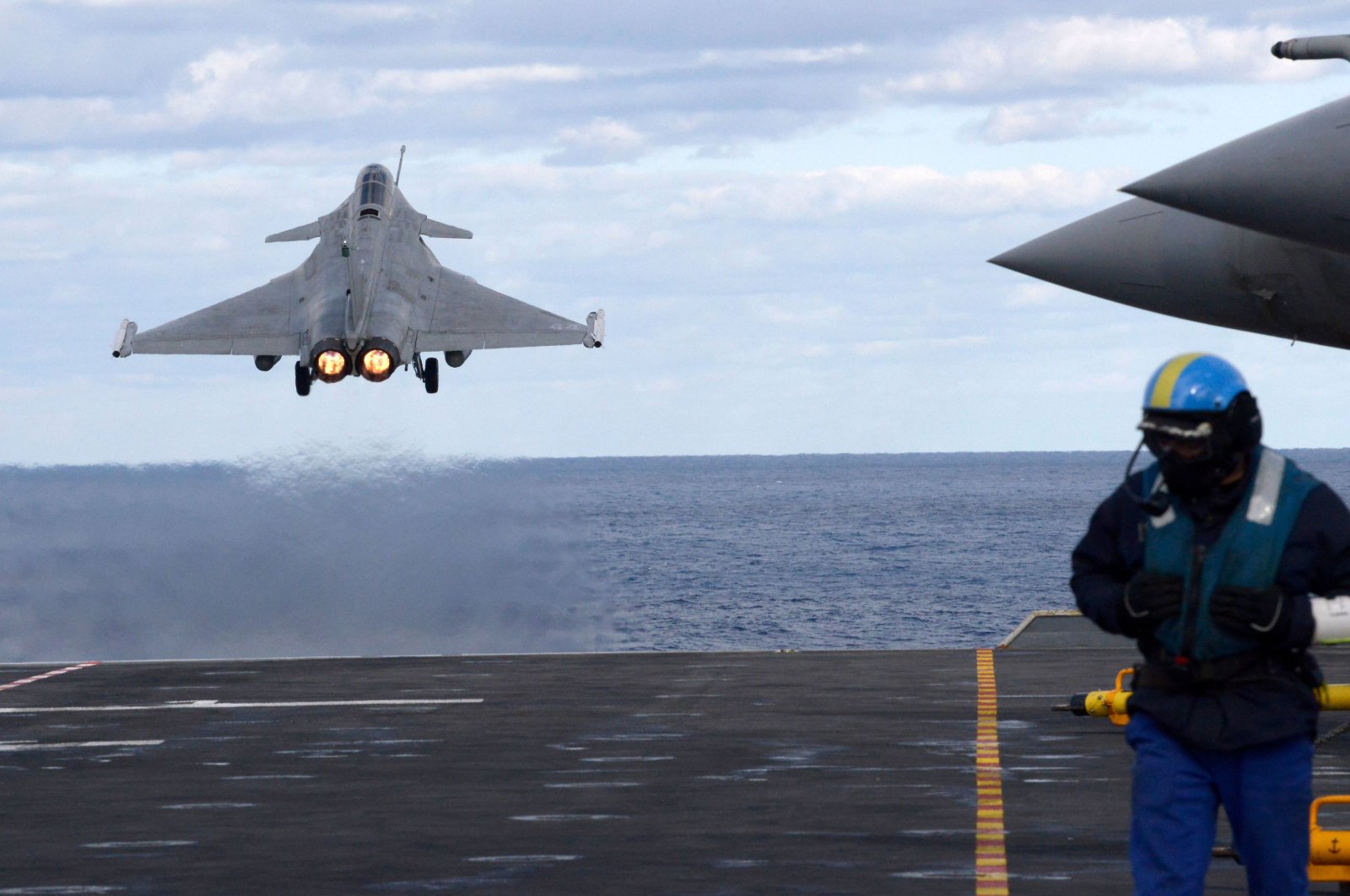 A Dassault Rafale fighter jet is catapulted from the French aircraft carrier Charles de Gaulle off the eastern coast of Cyprus in the Mediterranean Sea, Feb. 10, 2020. (AFP Photo)
by Munir A. Saeed Jul 09, 2020 12:05 am
RECOMMENDED

“Success has many fathers, failure is an orphan,” the wise ones say.

I will add that failure gets you dumped like a hot potato in the hands of benefactors. You don’t believe me? Ask Libyan has-been Khalifa Haftar, once considered the best game in town by his foreign sponsors. He knows a thing or two about hot potatoes.

I was listening to French President Emmanuel Macron the other day. He had no qualms about claiming that France never supported Haftar. Seriously! Of course, in the era of television and coronavirus social distancing, Macron was saved the embarrassment of looking us in the eye as he insulted our intelligence. Or perhaps he wasn’t. Unlike many of us who still have a good memory, the president is just too young to remember the three French soldiers who were killed when their military helicopter was shot down near Benghazi in July 2016. Clearly, they were not there paying a social visit to Haftar. Not in a war chopper. Nor would he remember the Javelin missiles discovered in the possession of Haftar forces that France procured from the Americans, probably using cash it withdrew from one of its two petrodollars ATMs. But to be fair to France, it did confess ownership of those missiles, explaining, “Those missiles were damaged! "Awaiting destruction”! In Haftar’s possession, we may ask? Seriously? How dandy was that?

Granted, torpedoing a political process intended to bring an accountable transparent rule of law is anathema to Haftar’s regional supporters including Russian President Vladimir Putin, who like his colleagues in Cairo, Riyadh and Abu Dhabi, has set himself up with job security until 2036 or eternity, whichever is later. And so installing another North African military junta makes sense for them, at least.

But what could possibly drive France to be involved in a destructive war whose ultimate objective is to restore a brutal military dictatorship, contradicting everything the French people stand for? Moreover, France’s role in Libya has dangerously split the NATO alliance. French and Turkish warships recently faced each other as adversaries rather than allies in the Mediterranean Sea. Instead of working with Turkey as a NATO partner, a nation that knows the dangers of and has freed itself from military rule, to help bring a civilian-led political process in Libya, Macron has taken the side of the region’s most ruthless dictatorships – Egypt, the United Arab Emirates and Saudi Arabia – in addition to Putin, who must be applauding the schism.

By what measure of expression and democratic representation of the people does Macron’s policy reflect the will of the French majority? Probably the answer to that and other Macron debacles might come soon. The next election is in 2022, and the French do not suffer fools.

Continuing to insult our intelligence, France says they were engaged in fighting terrorism – everybody’s cause celebre for rampage, plunder, death and destruction, from Afghanistan to Iraq and Yemen to Libya and Syria. One wonders, who has become more dangerous, more destructive, more criminal, the terrorists or those claiming to fight and save us from them?

The Soviet occupation of Afghanistan saw the creation of al-Qaida by the CIA, which funded, trained and armed the group, complete with stinger missiles. Immediately after the Soviets left Afghanistan and America won the Cold War, the Afghans were dumped, only to be remembered when America itself decided to invade the country. This time, however, it is the Russians who are hitting back at the Americans there, if the reports on bounty money are to be believed.

Even before the Afghan and American blood dried, the U.S. decided to launch another invasion to find weapons of mass destruction (WMD), or no, bring democracy, or no, create an anti-terrorism alliance. It took the maestro himself, former Federal Reserve chair Alan Greenspan, to admit what we already knew. He wrote in his book "The Age Of Turbulence" that “The Iraq war was largely about oil." Greenspan went on to express, “I am saddened that it is politically inconvenient to admit what everybody knows.” There, so much for WMDs, fighting terrorism and bringing democracy on the backs of war tanks.

There is a playbook in the West, used in every modern-day invasion of the Middle East. In it, loud noises are never the not-so-hidden, agendas. Pardon me for stating the obvious. The problem with their short-sighted and destructive manuscript is its unnecessary cost in blood and treasure.

In 2012, at the height of the Arab Spring and our optimism, I attended a conference in Istanbul to discuss “rebalancing.” Advocating for the idea of equalizing Arab-Western relations, I said, “while we Arabs must refuse to be held hostage by the past, and we will continue to advocate a forward-looking new page in our relations, the West must also free itself from its past.”

The West, tragically, was unable to live with the prospect of new realities emerging in the Arab world, moving instead to help cut the knees out from under democratic forces. Our argument for creating governments that do not rely on foreign powers for protection, but their own electorates to whom they will also be accountable, was exactly what was feared. When I said, “The West must realize that the incoming governments of Arabia, unlike the outgoing dictatorships, will be answerable to their people, and therefore have less wiggle room to make decisions that only serve short-term external interests over their people’s long term interests,” a Western friend came to me and said, “That’s exactly why your revolution will not be allowed to succeed.”

That kind of shift in the West toward the Middle East would require accepting representative governments created through a transparent, accountable political process and accepting economic exchange based on fair value. An exchange we have always been happy to engage in. No bloody and expensive invasions needed.

After all, the Arab world can neither drink its oil nor live in economic isolation, but the West has never been used to that type of relations with us, not when it was a colonial power nor later as the protector of proxy regimes it helped create at the end of its colonial presence. That inability to accept a change in the region lies at the center of its policies.

The survival of military and other undemocratic regimes in the region is not protected by the mandate of the citizens they govern but by foreign powers. The price for that quid pro quo is paid economically and politically and is never at fair value for the people who matter, their growing populations.

The vicious cycle is perpetuated. The more such arrangements are created at the top, the more unrest is generated at the base against the ruling tyrants, which in turn leads to more dependence on foreign protection. Imagining a violent outcome is a no brainer and clear before our very eyes.

Whether it is America and Britain in Afghanistan and Iraq, or France in Libya and elsewhere in Africa, the West's playbook has become more costly, not just for the peoples in whose territories it is played out, but also in the streets of the nations that employ it. Tyranny comes in different shapes and forms. It can also dress differently, and not just in turbans and military uniforms. Perhaps the worst is the one that deceptively comes in a suit and necktie, controlling the levers that drive the others.