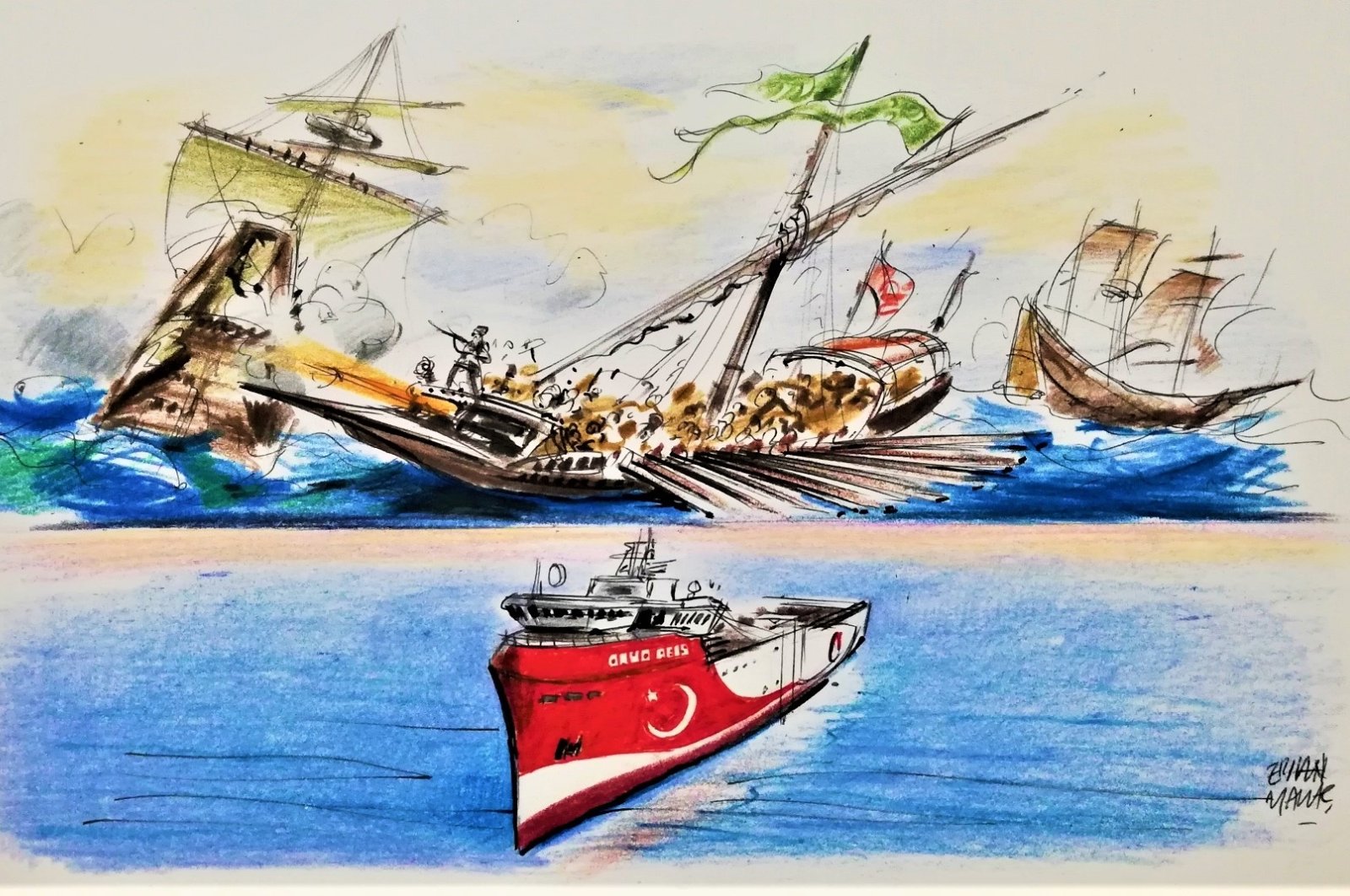 Last week, the Turkish seismic research vessel Oruç Reis began energy exploration in the Eastern Mediterranean. After starting exploration activities in its seas with the drilling vessel Fatih, Turkey deployed another vessel called Yavuz, which will be followed by another one called Kanuni.

Oruç Reis’s exploration activities aim to uncover possible new energy zones in the Eastern Mediterranean; however, Greece has adopted an aggressive stance against this. With the involvement of many other countries, things quickly became hectic in the region, further escalating the diplomatic tension in the international arena. It is likely that Turkey’s activities in the Eastern Mediterranean will make a tremendous impact.

The names of the ships that gave rise to this tense diplomatic traffic were also not chosen lightly. It is through these names that Turkey conveys the message that it has claimed its rights and historical heritage in the Eastern Mediterranean. In particular, Oruç Reis, an admiral in the Ottoman Empire, is seen as a symbolic figure in the history of Turkish domination in the Mediterranean. He is not only respected by Turks but also by the whole Islamic world. His life ended tragically but entailed many heroic moments.

The era of Sultan Mehmed the Conqueror (1451-1481) saw the most serious breakthroughs in Ottoman seamanship. When Mehmed II decided to conquer Istanbul, he ordered the formation of a strong navy in Gallipoli. During the conquest, a fleet of 350-400 ships was built.

Despite being unable to intercept aid from Venice during the conquest of Istanbul, the Ottoman navy dragged its ships over land, directly into the Golden Horn, proving the military body's effectiveness in war.

Attaching great importance to the navy after the conquest of Istanbul, Mehmed had a large shipyard built. After determining his strategies in the Eastern Mediterranean and the Black Sea, he proceeded step by step toward the Aegean Sea, starting with the islands closest to the Dardanelles and the Turkish coast. To this end, he seized the islands of Imbros (Gökçeada), Samothrace, Lemnos and Lesbos.

Yavuz Sultan Selim (1512-1520) played a big role in the strengthening of Ottoman seamanship. Until his reign, no changes had been made to the shipyard built by his grandfather Mehmed the Conqueror. He enlarged the existing shipyard, adding 300 new sections. The navy was transferred from Gallipoli to the Golden Horn. Thus, Tersane-i Amire, serving as the center of the navy until the fall of the state, was established. With this powerful navy, the seas of Egypt and Syria were seized and taken under Ottoman control.

By the time of Suleiman the Magnificent (1520-1566), the navy had strengthened its dominance in the Central Mediterranean and was becoming efficient in the Western Mediterranean. Moreover, Venice was no longer a competitor. The empire was now facing off with the Spaniards for domination.

Here lies the story of the Barbaros brothers amid all of these achievements in the Mediterranean. Hızır Hayreddin Reis, nicknamed Barbaros, was famous for his struggles against the Spaniards in the Mediterranean. He gathered all his conquests, treasures and his navy, especially those in Algeria, and presented them to the sultan.

When Suleiman the Magnificent appointed him the kapudan pasha (grand admiral of the navy), he made him tell his life story. After listening to Hayreddin Pasha, Suleiman said: “Now, how and why have you and your brothers come out, who are you? What are the wars you have fought on land and at sea, big and small, until now? Write them in full and in detail – from beginning to end – and collect them in a book so they can be recorded in history written in my time.”

Seyyid Muradi Reis, a sailor, poet and historian, was assigned to write the book. Barbaros, too, could not refuse the sultan's order and told him his whole life story. Seyyid Muradi added the information that he witnessed himself and heard from other sailors to these memories and presented them to the sultan. Thus, Oruç Reis's life has survived to the present day with all the details conveyed by his brother.

The father of the Barbaros brothers, Yakup Ağa, was the guardian of Lesbos Island during the reign of Sultan Mehmed the Conqueror. They were four brothers, from the oldest to the youngest: Ishak, Oruç, Hızır Hayreddin and Ilyas. Ishak was working on Lesbos, while Oruç and Hızır were engaged in maritime trade. Oruç was once attacked by the Knights Hospitaller of Rhodes on his way to Tripoli for trade, taking his youngest brother Ilyas with him. Here Ilyas was killed in front of his brother, and Oruç was captured and jailed.

Hızır Hayreddin tried to save his brother by paying a ransom, but he could not. Just as he was about to give up hope, Oruç found an opportunity to escape. After this incident, he engaged in piracy under the name Oruç Reis. He acknowledged that the domination of the Knights Hospitaller of Rhodes, the Venetians and Spaniards in the Mediterranean had to be undermined.

Hızır Reis, the Barbaros Hayreddin Pasha of the future, continued to trade. Later, he and Ishak joined their brother. With the support of the lord of Tunis, Oruç Reis and his brothers started largescale piracy in the Mediterranean.

There were two forms of piracy at the time. One was unofficial and marauding, targeting civilians, while the other was official and military piracy. This piracy was the naval version of the vanguard forces called “raiders” in the army. They were officially affiliated with a state.

The Barbaros brothers were also engaged in military operations under the auspices of the lord of Tunis, the sultan of Mamluk and the sultan of the Ottoman Empire. Their goal was to ensure maritime safety in the zones belonging to these states and thus the development of trade. Therefore, they did not interfere with civilian ships.

Oruç Reis' navy saw many victories in the Mediterranean. Thanks to their success against Genoese, Venetian, French and Spanish warships, both their power and wealth increased. Their fame as the “Barba-rossa” (red beard in Italian), the brothers were known across Europe. This nickname was first given to Oruç Reis and then to his brother Hızır Hayreddin Reis.

Oruç Reis lost an arm in one of the battles. After he recovered, however, he returned to the sea and participated in the fighting again. His reputation grew further when he moved the expelled Muslims and Jews from Spain to North Africa. He gained a reputation as “Father Oruç” in the Islamic world due to the help he gave to the needy Muslims of Spain.

The lords of some Arab tribes and cities in North Africa also called on the Barbaros brothers to help. These were seeking help against tyrannical Arab lords and Spanish or Genoese invaders. The response of Oruç Reis and Hızır Reis to these calls resulted in them establishing states in North Africa. They founded states in Bougie, Jijel (1513), Cherchell (1514) and Algeria (1516).

With the help of his brother Ishak Reis, Oruç Reis seized Tlemcen, which collaborated with the Spaniards. But the Spaniards quickly sent a large force there. Hızır Hayreddin Reis was unable to help Oruç Reis in this attack. After months of siege, the castle did not fall, but both sides decided to declare peace due to the losses.

The warriors fighting for Oruç Reis, relieved by the agreement, began to ride out on their horses. After half of them had left, the Spaniards attempted to confiscate their belongings, supplies and weapons, giving rise to a conflict. Ishak Reis and all the soldiers there were martyred in this sudden attack.

The lord of Tlemcen, who was emboldened by the heavy casualties here, gathered his troops and besieged the castle.

Oruç Reis fought with his comrades day and night. Finally, he realized there was no escape from the castle by fighting, and with his few remaining comrades, he attacked and split the siege troops.

A 45-man Spanish detachment, aided by some Bedouins, followed them. They ran for days without food or water and were able to get 100 kilometers (around 60 miles) from Tlemcen. He was martyred by Lt. Garcia de Tineo at the edge of Al-Malah River (formerly Rio Salado).

As proof of his death, his head was separated from his body and sent to Spain with a bag full of honey. The martyrdom of Oruç Reis made the king so happy that he rewarded Garcia de Tineo and held festivities.

Hızır Hayreddin Reis heard that his brothers had been martyred and that he was now alone. He set out with his navy, and he ended the Spanish rule in Algeria and the other principalities, taking them under his own rule. During the reign of Suleiman the Magnificent, he presented the whole of Algeria as a gift to the Ottoman state. When he was appointed as navy commander, after the victory in the Battle of Preveza, the Ottomans’ longtime domination of the Mediterranean started.

The influence of the Barbaros brothers made history. The name “Hector Barbossa” in the popular film “Pirates of the Caribbean” was inspired by Barbaros Oruç and Hayreddin Reis. There are strong theories that the character of Jack Sparrow, portrayed by lead actor Johnny Depp, was also inspired by Yusuf Reis.