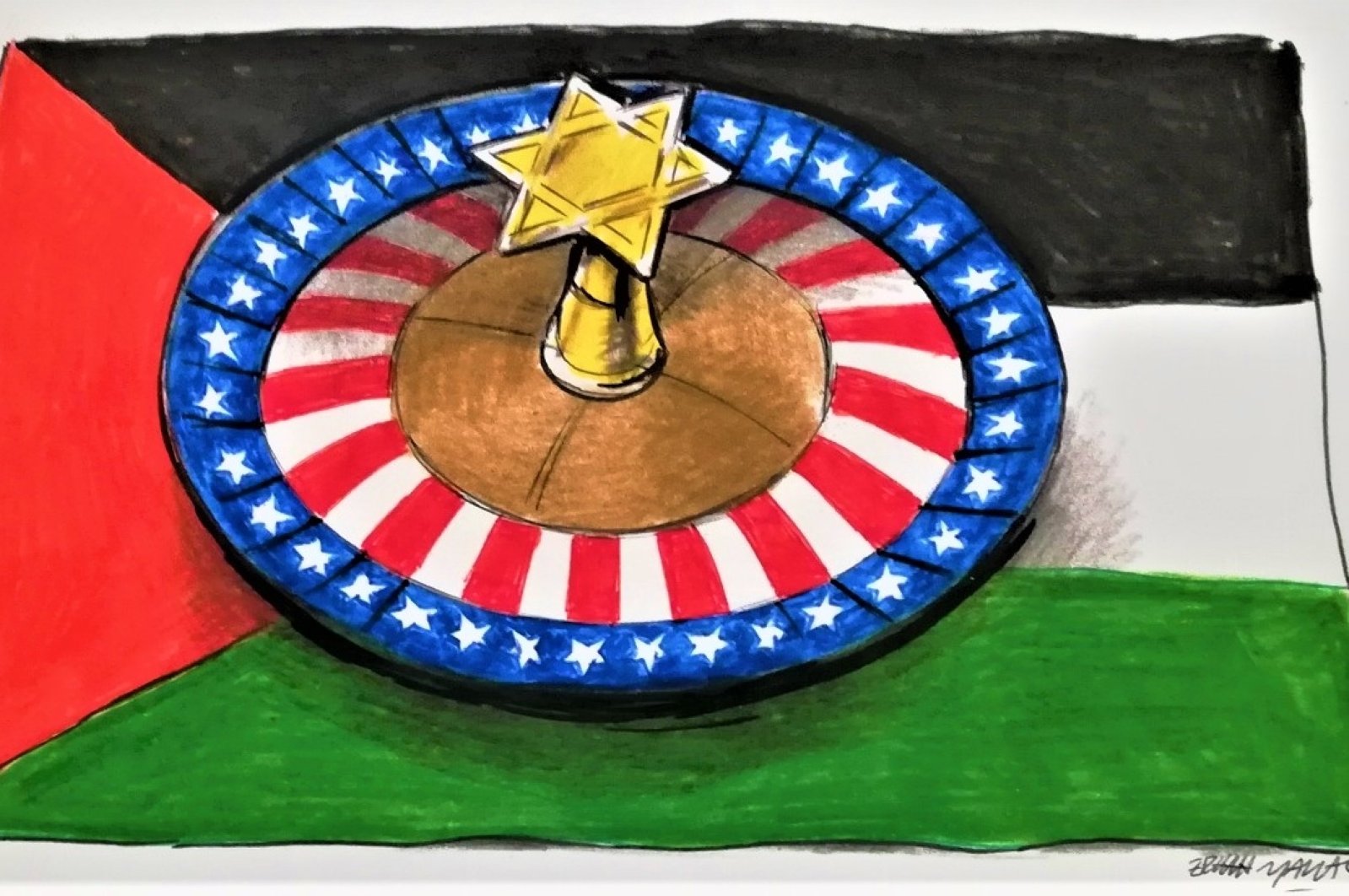 The U.S.-Israeli gamble in the Arab world is risking regional security, creating more discrepancies among states and causing further damage to the Palestinian cause

Last week's showdown by U.S. President Donald Trump and Israeli Prime Minister Benjamin Netanyahu at the White House, where Israel's "normalization" agreements with both the United Arab Emirates (UAE) and the Kingdom of Bahrain were celebrated, had nothing to do with peace but was simply a surrealistic scene of signing diplomatic agreements that had been kept secret for many years and were now made public.

However, while this deal is designed to assist in a new phase of Israeli relations with Gulf monarchies, it will not be the key to resolving the long-standing Palestinian-Israeli conflict and Palestinians will be the only ones paying the price for these leaders’ geopolitical ambitions.

For decades, most of the Arab states were united in their hostility toward Israel, besides their rhetorical support for the Palestinian. The 2002 Arab Peace Initiative (API) offered a collective recognition by Arab leaders of Israel's right to exist and a normalization of diplomatic ties in exchange for its complete withdrawal from Arab lands captured since 1967. This initiative served as the key framework for the normalization of Arab ties with Israel for years.

However, in recent years, Israel and some Arab countries have engaged in a secret rapprochement, encouraged by common concerns over Iranian influence in the region, focusing mostly on intelligence sharing and extending their cooperation in a number of areas such as joint military exercises, diplomatic initiatives, research development and investment.

The Aug. 13 announcement of the Abraham Accords between Israel and the UAE was the first public and dramatic demonstration of these shifting regional dynamics.

Within a month, Bahrain joined the Emirates in normalizing relations with Israel thus becoming the fourth Arab country to reach such an agreement with Israel although the agreements with Egypt in 1978 and Jordan in 1994 were "peace" agreements after war and border conflicts.

In reversing the Arab order by putting regional agreements before the Palestinian issue, the UAE and Bahrain removed a key incentive that Israel may have had, to end its 53-year-old occupation of the West Bank and east Jerusalem.

Unsurprisingly, replacing Palestinian statehood with regional normalization has long been one of Netanyahu’s main ambitions and he now emerges as the main winner of these agreements.

Palestinians were dismayed, as these moves by the two Gulf States will weaken a well-established pan-Arab position that calls for Israeli withdrawal from occupied territory and acceptance of Palestinian statehood in return for normal relations with Arab countries. These moves without any underlying conditions will put the entire Palestinian national project in jeopardy.

At the Arab League early this month, the Palestinians sought but could not obtain a condemnation of the UAE-Israel accord from fellow members and only could secure renewed Saudi support for their right to statehood.

Full normalization with Israel by the UAE might have dissuaded Israel from a formal declaration of sovereignty over West Bank territory temporarily – but Israel did not make any concessions. Its brutal occupation has been rewarded while its de facto annexation and settlement construction on Palestinian territories continues unobstructed, entrenching an apartheid system of control over Palestinians.

What kind of 'peace'?

As a response to Bahrain’s deal, Netanyahu said this decision marks a “new era of peace.”

“For many long years, we invested in peace, and now peace will invest in us, will bring about truly major investments in Israel’s economy,” Netanyahu said in a video statement.

Which peace was Netanyahu talking about and what peace did he invest in when immediately following the UAE-Israeli announcement, he held a press conference in which he said that he remained committed to applying sovereignty to areas of the West Bank and this agreement only suspends annexation; it will still happen.

Right-wing Netanyahu doesn’t even have an interest in a two-state solution and is doing everything he can to ensure one never emerges by systematically grabbing large parts of the West Bank and holding all of Jerusalem.

Netanyahu is trying his best to shift from making peace with the Palestinians to making more progress toward normalization with Arab illiberal leaders, and Trump has encouraged and facilitated this rapprochement.

The last agreements between the two Gulf states and Israel are taking place as Republican President Donald Trump trails Democratic challenger, former Vice President Joe Biden in several opinion polls ahead of the U.S. election. Foreign policy has not figured prominently in the election campaign, but Trump is eager to present himself as a peacemaker even as he intimidates Iran.

For Trump, the deal is a rare foreign policy success, as he continues to mismanage the national response to the COVID-19 outbreak. His pro-Israel moves have been seen, in part, as an effort to bolster his appeal to evangelical Christian voters, an important segment of his political base. With these agreements, he can now swap a pretty big flop for a significant one and only foreign policy win.

Similar to Netanyahu, Trump has no interest in the two-state Palestinian-Israeli solution favored by the United Nations and the European Union, preferring to create more irreversible “facts on the ground” while dangerously ignoring the Palestinians’ just historical rights.

What is certain is that the Palestinian leadership feels deeply betrayed under these stressed domestic and diplomatic contexts, with no incentive to engage in serious final status negotiations, the situation on the ground will likely grow more chaotic and complex.

The PNA described the UAE and Bahrain Israel normalization announcements as a “betrayal” of the API since regional normalization was one of the Palestinians’ most powerful leverage points.

Although Arab Gulf states maintain support for the Palestinian cause, some of these countries particularly the UAE, and Bahrain continued to pursue ties with Israel in the last few years through economic connections, arms trade, technological collaboration and other ventures.

This trend has increased Palestinian concern over their potential abandonment by traditional regional allies. Meanwhile, Palestinian refusal to engage with the United States after its so-called “Deal of the Century,” which excluded Palestinian key demands of an autonomous state with a capital in east Jerusalem. This resulted in challenging relations with some Arab states who prioritize other national security issues which incentivize their continued cooperation with the U.S. and Israel.

The upcoming U.S. elections could be a critical phase for efforts to resolve the Israeli-Palestinian conflict depending on who the winner will be.

If Trump wins a second term, the “Deal of the Century” will stay and the situation will deteriorate as the Trump administration may allow Israelis to proceed with the implementation of the plan’s territorial aspects, offering its backing and support whenever needed and encouraging further relationship building with more Arab countries disregarding the Palestinian rights.

On the other hand, if Biden wins, the conflict will not be a priority as he will have more pressing domestic and foreign policy issues to think about although a revision of the U.S. policy toward the issue would be expected.

Under either scenario, the ongoing regional dynamism will not have the potential to facilitate a path toward a just peace between Israelis and Palestinians in the near future.

The image of Israeli and Gulf states leaders holding hands with Trump on the South Lawn of the White House was just a “peace show’’ helping an American leader in his reelection bid, several weeks away, and an Israeli prime minister fighting to remain in power as his political survival and even his personal freedom are at stake after being charged in multiple corruption cases.

The real peace in the Middle East will only be realized when the Palestinian-Israeli conflict is solved in accordance with human rights, international laws and U.N. resolutions.