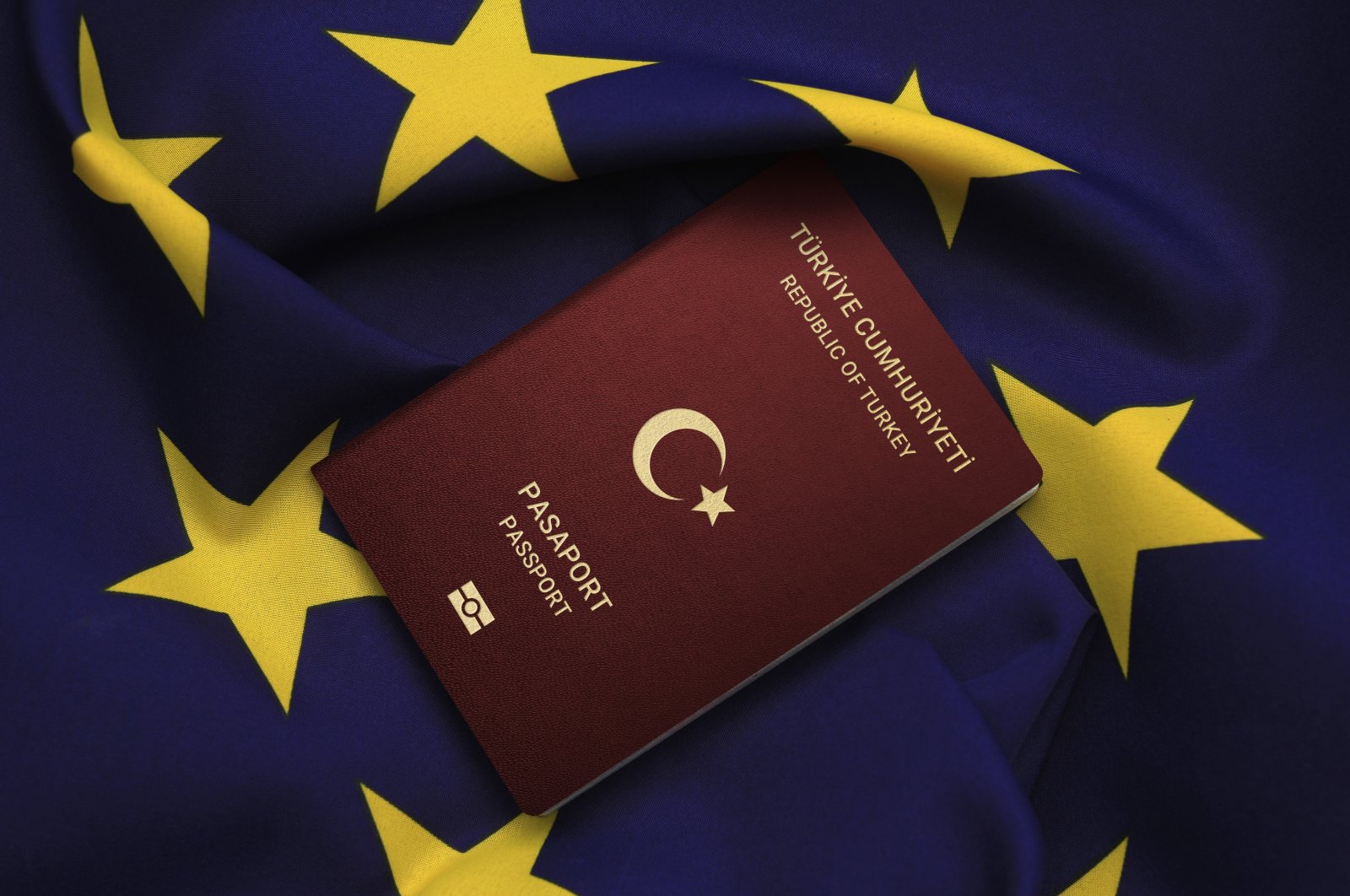 In this illustration, a Turkish passport is seen on the flag of the European Union. (Photo by Shutterstock)
by Melis Kulluk
Mar 02, 2021 12:05 am

Turkey is a unique country with a dynamic population, vibrant economy and rich culture. Bridging the Asian and European continents, the country attracts different religious groups, ethnicities and cultures. With strong cooperation and leadership, Turkey, a member of NATO, the G-20, the Organization for Economic Co-operation and Development (OECD) and the European Council, is a global game-changer.

Since 1959, Turkey has been determined to become a member of the European Economic Community. In December 1999, it became a candidate for accession negotiations, which later commenced on Oct. 3, 2005. The period from 1999 to 2009 was extremely successful.

The customs union and visa liberalization were and still are priorities in the negotiations and this year, 2021, Turkey is committed to becoming a member of the bloc.

According to Egemen Bağış, Turkey’s ambassador to the Czech Republic and the former EU minister and chief negotiator, the path leading to the EU accession negotiations is extremely important and will lead to modernization. There is greater awareness about the reforms since the accession negotiations commenced, particularly now in 2021, and there is an understanding that the government is moving forward.

Looking at Turkey’s EU accession negotiations, 16 chapters are open, while one is temporarily closed.

Since 1998, there have been progress reports to keep Ankara and the European Commission in the loop. In last year’s report, Turkey did well in the areas of company law, trans-European networks, and science and research, and improved in areas such as the free movement of goods, intellectual property law, financial services, and enterprise and industrial policy.

However, more needs to be done in terms of competition policy, information society and media, economic and monetary policy, the customs union, external relations and foreign, security and defense policy, according to the European Commission.

Looking at the execution of the reforms, we see Turkey has chosen to implement amendments that suit its priorities at its own speed.

At this point, I would like to highlight that Turkey may require the support of the secretariat general for EU Affairs. European countries that are experienced in democracy and the rule of law could offer cues for Turkey's democratization undertaking.

Also, it should be kept in mind that a “privileged partnership” would in fact be preferred to “full membership.”

We need to question whether Turkey is prepared to concede a portion of its sovereignty to the European Union. This is extremely important.

In 2001, Turkey was hit by an internal economic crisis, and the country needed the support of the International Monetary Fund (IMF) program.

As a matter of fact, Turkey readministered the banking sector and fiscal and monetary policies, declaring the central bank’s autonomy.

In 2002, the Justice and Development Party (AK Party) came to power at the right time. The party adhered to the program and thus made significant progress in economic and political spheres. The economic plan came in the nick of time, paving the way toward democratization.

For more than 10 years, the EU reform package has been considered a priority but also a source of conflict for political parties.

There are disputes on the allocation of resources, human rights, democracy, the rule of law, the independence and impartiality of the judiciary, unemployment rates, interest rates and the gross domestic product (GDP).

Last year, with the emergence of the coronavirus, tensions increased. Political parties, unfortunately, follow their ideological agendas and do not discuss the real problems society faces.

Following the guidelines for the accession, there is both optimism and pessimism.

Since Jacques Chirac’s presidency, Turkey’s acceptance to the EU was seen as an opportunity by France. Even former French President Nicholas Sarkozy thought that Turkey had big potential in the bloc.

On the other hand, incumbent President Emmanuel Macron’s negative approach will influence relations.

For German Chancellor Angela Merkel, “the accession negotiations should be suspended” after Turkey intensified its security measures following the July 15 coup attempt by the Gülenist Terror Group (FETÖ).

Indeed, EU member states have different points of view. On the Turkish side, there is optimism.

Undoubtedly, Turkey’s membership will change the dynamics in the bloc. Its young generation, geography, energy hubs and natural resources are among the advantages Turkey can bring to the table.

Some of the disadvantages are the problematic ties with Greece, the Greek Cypriot administration and France.

Turkey is also responsible for affairs in the Middle East and needs to pursue policies that contribute to peace and stability. This requires it to be politically strong, financially stable and proactive in negotiations.

Both the EU and the region need a strong ally. That’s why Turkey is in a critical position. From the war on terror to the economy, Turkey has a lot to do with reforms.

Obviously, Turkey and the EU need a common plan, a strategic partnership. For this to happen, both need to express their good intentions and look for ways to boost cooperation. Just as Turkish officials recently reiterated, the country has roots both in the East and the West.

*Freelance op-ed contributor based in Istanbul