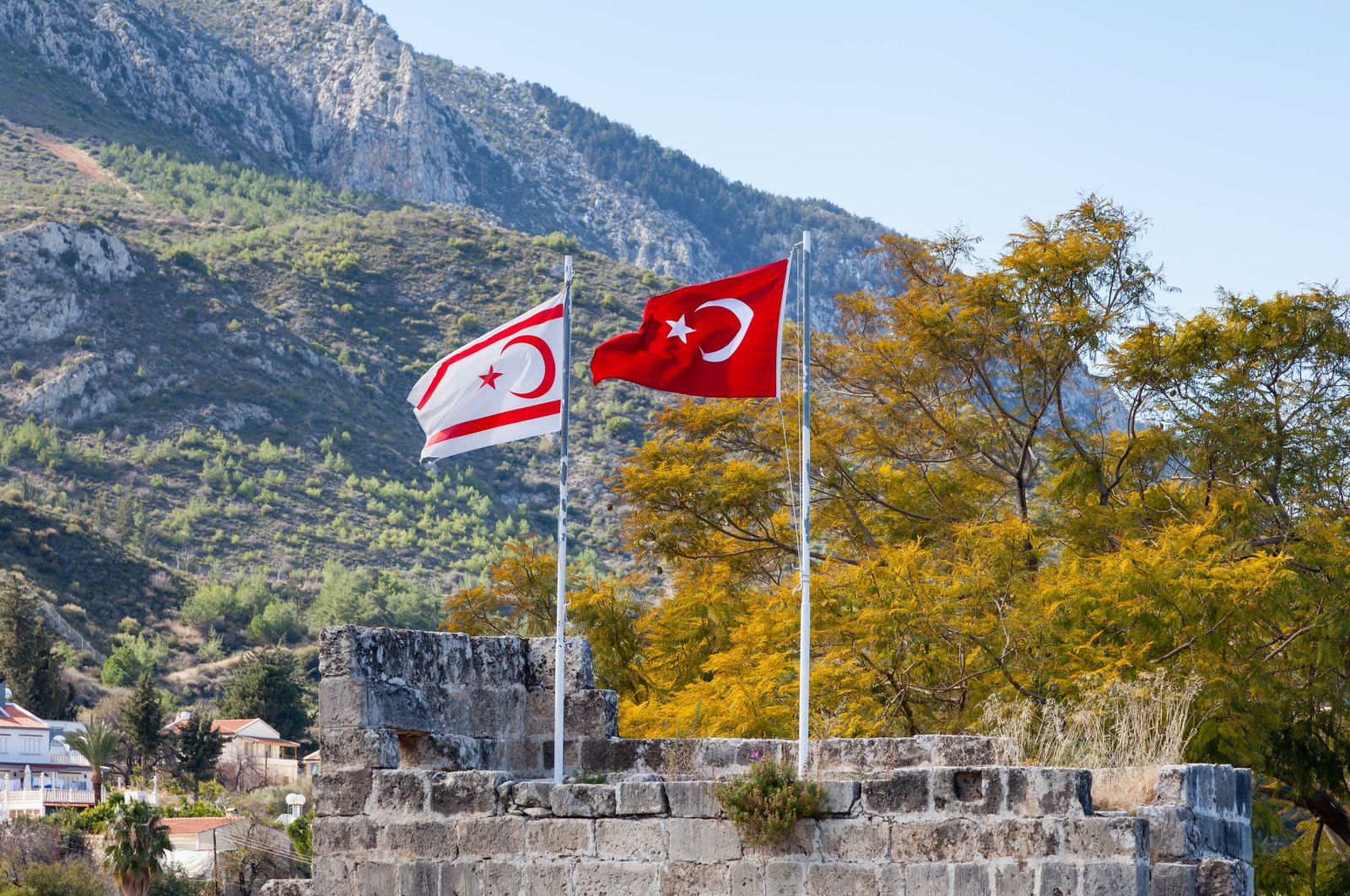 The flags of Turkey and the Turkish Republic of Northern Cyprus (TRNC) fly side by side at Bellapais Abbey in the TRNC, Jan. 27, 2016. (Photo by Shutterstock)
by Mehmet Öztürk Jan 14, 2022 12:05 am
RECOMMENDED

The island of Cyprus is the apple of the Mediterranean's eye. For centuries, it has been home to several peoples and was once ruled by the great Hittite, Ottoman, Phoenician, Assyrian, Persian and Byzantine emperors. Due to its geopolitical importance, anyone who wanted to have a say in the region set their sights on the third-largest island in the Mediterranean. The Ottomans conquered it during the 16th century and sent settlers from Anatolia, drastically changing demographics on the island for the first time. The Ottomans also made some changes to the island's political status, making it a state in its own right with its own governor and appointing religious officials who were free of central religious authorities. Many settlers from central Anatolia were sent to populate the island. Muslims made up around 75% of the population during the 18th century, which decreased to 50% at the beginning of the 19th century. These Muslims were all migrants from central and southern Anatolia; in other words, they were citizens of the Ottoman Empire.

At the end of the 19th century, the British Empire took over the management of the island, which eventually led to the British annexation in 1914, right at the beginning of World War I. Thus, the days of struggle for the islanders, especially the Turks of Anatolia, began. The island was left to the mercy of the British Empire, especially during WWI and the Independence War of the newly born Republic of Turkey. The British exploited its resources and carried out assimilation policies to suppress signs of both Turkish and Greek cultures. By 1955, the extremist Greek Cypriot nationalist EOKA terrorist group started armed actions against Turks.

The island secured its independence in 1960 as a result of the ongoing battles between the Turks and Greeks, which eventually caused the British Empire to lose control. The British Empire's waning interest in the island after exhausting all its resources may also be a reason. After its independence, Turks made up only 18% of the population while the rest was almost entirely made up of Greek Cypriots, who passionately advocated for enosis, the union with Greece. Turks had to struggle for their rights and their lives for almost two decades against armed Greek militias.

1974 was another important year for the islanders. The Turkish Armed Forces (TSK) conducted an operation in the north of the island, secured a border for islander Turks and helped establish a new country called the Turkish Republic of Northern Cyprus (TRNC).

The country that does not exist

Today, Turkish Cypriots, Turks hailing from Anatolia and many international expats and students live in the TRNC, though Turkey is the only country to officially recognize it.

Citizens can obtain a TRNC passport, which only functions in Turkey, a Turkish passport or, for those who lived on the island before 1974, a Cypriot passport, which is internationally recognized. However, due to the never-ending tension between political authorities, the Cypriot passport, a right the Turks have earned, remains on the negotiation table.

Cypriot Turks, who were once sent to the island to settle and make those barren lands home, have been in a bit of a dilemma for more than a hundred years. Their home country is small and under constant threat by its closest neighbor, as it remains unrecognized by the rest of the world.

On the other hand, the same neighbor provides a passport, which opens the world up to them, but under the name of a political authority that doesn't believe in Turkish freedom on the island.

Turkey has always been on the Turkish Cypriots side. Ankara helped their cause and made it possible for them to obtain their freedom, it built a water pipeline to the island from Turkey, founded universities on the island and provided them free education in Turkey. It sends financial aid every year because the island is not yet considered self-reliant. If we consider the topic from a “Turkey is helping Cyprus” angle, it’s pretty obvious. The Cypriots should be thankful to Turkey. That would be true if the locals of the island hadn't been the Anatolian Turks sent by the Ottoman Empire first and then by Turkey after 1974. Moreover, Turkish citizens were sent to populate the island less than 50 years ago. So, at some level, it is Turkey's responsibility to help the newly born TRNC get on its feet.

Turks on the island want to be recognized by the world and see the Annan Plan as the best way to do so. The plan basically suggested the union of two sides and changing the government between Turkish and Greek sides every 10 months. The safest solution, of course, should contain both Greece and Turkey as the two guarantors who have equal says in the event of a dispute, as Turkey’s political authorities will not renounce the right to have a say in such situations. However, after the suggested solution was put to a referendum, the results were very different, with 64% of the votes in favor of the system coming from the Turkish side and 75% of the votes against it coming from the Greek side.

As mentioned above, the TRNC is not a self-sufficient country in terms of its economy or natural resources, therefore it needs help from Turkey. However, naturally, most Turks on the island demand their economic independence as well. At some level, it’s true that they are Turkey’s people but it’s also true that a country’s fate should be decided by its own residents.

The Greeks waged very violent street battles against Turkish Cypriots not too long ago and have long been advocating for the "enosis" plan (the incorporation of Cyprus into Greece). There has not been a normalization process between the two parts of the island and no one officially apologized for the civil massacres. Besides, the Greek side is more developed with the support of the European Union and sees the TRNC as an economic burden on its back.

What should the TRNC do?

The responsibility here lies with the Turkish Cypriots. The first priority should be investments in the TRNC’s economy and reforms will be required. This investment can start with agriculture and water, then tourism and education can follow.

Simultaneously, there should be investments in relations with the Greek side as well if the people desire to live together in peace. But, it is true that this will not be a short journey.