Uzbekistan's heritage and its post-pandemic efforts 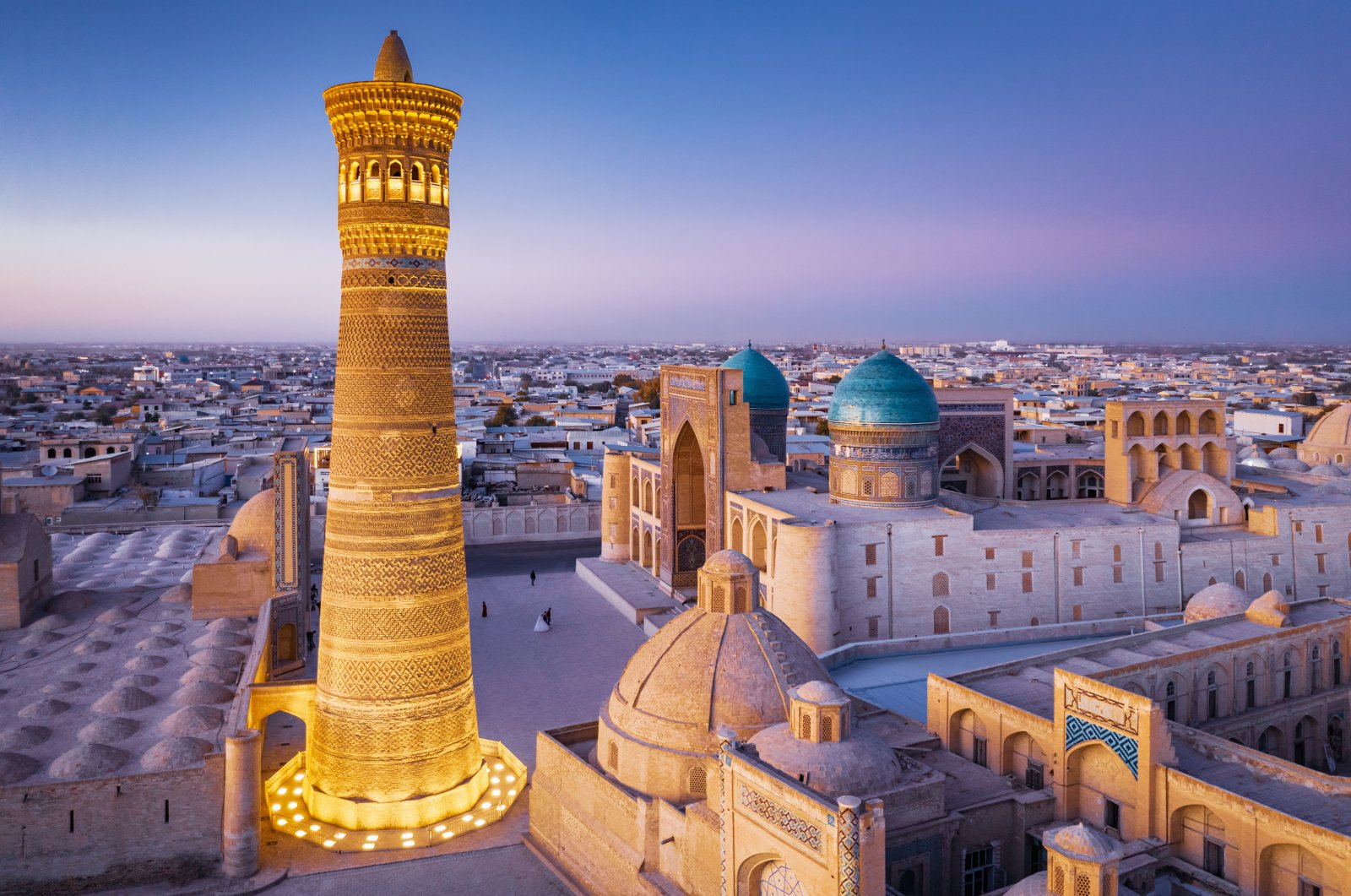 A colorful sunset backdrops the famous Old Town in the City of Bukhara with the iconic Kalyan Minaret and Mir-i Arab Madrasa, Uzbekistan. (Photo by Getty Images)
by Gökçe Özçiftçi Oct 26, 2021 12:05 am
RECOMMENDED

It’s a fact that the Uzbek culture is one of the richest in the world, which certainly can be explained by the history of the region that’s now called Uzbekistan. Historically, Turkic, Russian, Greek, Chinese and Persian tribes have had influence on Uzbek culture, making it the crossroads of Central Asia. However, it has come to my attention that many ignore the contributions of Uzbek heritage as the coronavirus pandemic kept us from traveling and forced us to do research at home, particularly during months of quarantine.

Without a doubt, every field around the world has changed in the aftermath of the spread of COVID-19. It has both caused changes in the lifestyles of people – and the livelihood of countries as well. Tourism, for example, has become the common point where people and states have faced one of the biggest problems during the coronavirus period. People couldn’t travel, causing many countries' tourism incomes to suffer. It would not be an exaggeration to say that holidays have gone online as people flock to the internet to “travel” to new countries, while countries also flock to redesign official websites to present their heritage. In this context, I got a great chance to renew my knowledge of Uzbekistan, whose history, culture and heritage were already on my radar.

The Central Asian country suffered from tourism loss after the coronavirus level in the country was periodically reported as “unknown.” The country had to mobilize all governmental and nongovernmental agencies to curb the virus spread and initiated strict public and travel measures. From transportation capacity to school measures, several significant restrictions were adopted nationwide. Thanks to the mass campaign, the number of current COVID-19 cases in Uzbekistan has successfully declined since its peak in late summer 2020, but the infection numbers have begun to increase again. Currently, there is no curfew, but travel is regulated via health measures, such as PCR tests or vaccination.

In this regard, the tourism industry in Uzbekistan, just like in every other country, was affected. The country’s solution to the issue was to seek ways to create new business regulations after establishing a number of reforms in all sectors, particularly in tourism. The positive annual economic growth last year confirms the Uzbek government has done the right thing.

The growth signals that backing the economy to save tourism continues to be the backbone of the country as the government is keen to introduce its historical and cultural legacy, welcoming visitors from all over the world.

A history to delve into

Uzbekistan’s historic region has produced a long line of bright thinkers and artists who have contributed greatly to the advancement of human culture. Thus, a great example was Iranian scholar Abu Rayhan al-Biruni. A scholar and polymath during the Islamic Golden Age, he was born in the area of Beruni province, which is now part of modern-day Uzbekistan, near Turkmenistan’s Köneürgench city on its southern border with Uzbekistan. Al-Biruni made significant contributions to the domains of mathematics, philosophy, medicine and science, while he is said to have researched the theory of the Earth's rotation on its axis and revolution around the sun. The Muslim polymath contributed to several geographical works about India as well as a variety of literature on natural science and humanities. His addition to many diverse fields is undeniable.

Furthermore, one couldn’t talk about Uzbek heritage without mentioning Ulugh Beg, who was an astronomer and mathematician and established a prominent observatory at Samarkand in the 15th century. Ulugh Beg’s influence was significant not only in today’s Uzbekistan but also a synonym of the great development that occurred in the Central Asian region. He was known for his contributions to astronomy-related mathematics, as well as his broad interests in the arts and intellectual pursuits. Many scholars afterwards regarded Ulugh Beg as the most important observational astronomer of the 15th century. In Samarkand and Bukhara, he founded the Ulugh Beg madrassa, transforming the cities into Central Asian cultural centers of learning. Consequently, Ulugh Beg’s influence still remains significant today.

Lastly, another great scholar was Ali-Shir Nava'i, who is considered by many as the founder of Turkic literature. Other than his great contribution to the Turkic language, he was extremely interested and talented in the area of music.

It goes without saying that the Uzbek heritage is also rich in the field of architecture through its monuments. The Guri Amir mausoleum in Samarkand, the Ark of Bukhara and many other significant constructions that are vestiges of the diverse tribes that once lived in today’s Uzbekistan make up the country’s great cultural heritage. One of the consequences of the richness of Uzbek heritage is that nowadays, Uzbekistan has “four cultural World Heritage properties (that) are living historic cities: the historic center of Shakhrisyabz, the historic center of Bukhara, Samarkand, the crossroads of cultures, and Itchan Kala in Khiva” listed as UNESCO World Heritage Sites.

Even though Uzbek culture may not be widely discussed, its contribution to humanity is evident. The country's cultural heritage is vibrant and distinct; it has evolved through thousands of years, incorporating the traditions and customs of the many peoples who have lived in the country's current area.

Much more could be listed here about the Central Asian country’s legacy in the world. Therefore, this article can conclude by praising the Uzbek government’s efforts to revive its tourism and spread its heritage worldwide. Hopefully, with widespread vaccination, countries can now strengthen cross-cultural bonds through post-pandemic efforts and road maps.

Op-Ed contributor based in Brussels
RECOMMENDED