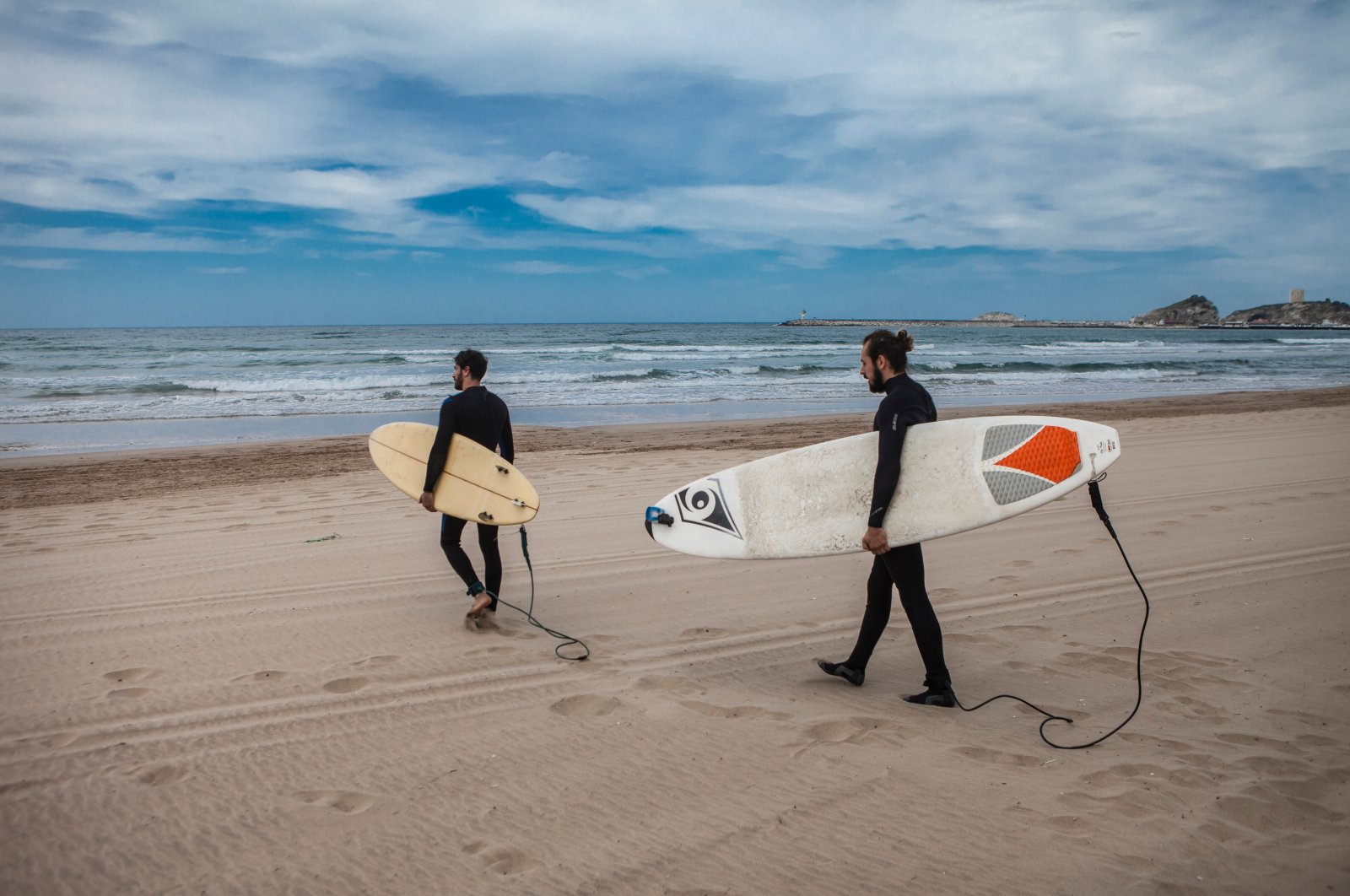 In several articles, I tried to express the necessity of Turkey's maritime opening and justify it with a geopolitical and socio-cultural approach. Furthermore, I had proposed promoting a maritime opening through water sports. Now, there is great news in this regard.

Turkish surfers narrowly missed participating in the 2020 Tokyo Olympics even though surfing is a relatively unknown sport in Turkey. As a surfer, I was fascinated by these developments.

So, I got to know Tunç Üçyıldız, the captain of the Turkish national surf team and the founder of the Turkish Wave Surfing Branch (TWSB) – which will soon be a federation – and his vice president Hürol Şengül via Zoom. I talked to them about their remarkable successes and achievements. By doing so, I was overwhelmed by these two gentlemen's positive energy and radiance.

Üçyıldız and Şengül emigrated to the United States at a young age to study and they still live there today. However, they travel to Turkey several times a year to, among other things, pursue their duties with the TWSB.

The advantage of living in the U.S., both told me, is that they learn surfing from professionals and get better at it. Hence, they can pass on what they've learned to younger people in Turkey.

Üçyıldız, who has been surfing for more than 20 years and was the first Turk to participate in the “ISA World Surfing Games,” explained to me that he officially founded the branch in 2016.

Since then, the TWSB has operated under the Emerging Sports Branches Federation of the Turkish Ministry of Youth and Sports. The TWSB is expected to gain independence and private law status (like all other major Turkish sports federations) in 2022 when they officially start training surfers and surf instructors.

In fact, the year 2012 was a milestone in Turkish surfing history that paved the way for their later successes, he stated. In that year, with the help of freshly formed local surf groups, such as the Alanya Surf Team and the Mimar Sinan Surf Club, and with the support of the Turkish Youth and Sports Ministry, Üçyıldız and his colleagues were able to organize the Turkish Surfing Championship for the first time in the famous surfing fort of Kilyos in Istanbul.

Since then, the tournament has taken place annually in Istanbul or Alanya in Antalya province on the southern coast where it has aroused the interest of hundreds of people living there. The surfers explained that the championships will be held in other places that offer good waves in the following years.

Moreover, they told me that participation increases each year, as does the interest of the Turkish diaspora. The three best surfers at the Turkish championship will join the five-person national team and earn the right to participate in the “ISA World Surfing Games,” allowing them easy access to prestigious universities in Turkey and granting them the right to a scholarship for the duration of their studies.

In Turkey, surfing is possible in the Mediterranean Sea, the Black Sea and the Aegean Sea, depending on the season.

While surfing in the Black Sea is best from September to June, the Mediterranean and the Aegean Sea offer great waves throughout the winter.

There are six – soon to be seven – official surf schools along the Turkish coast, where currently almost 100 licensed surfers are trained under the care of the TWSB.

They figured out that in the next few years, hundreds will follow as Turkish people have traditionally held reservations about surfing since the sport and the sea as a habitat are foreign to them, but the youth especially have an increasing interest in it. As such, they attract many new surfing candidates every year.

Şengül, who has contributed significantly to the development of the TWSB, explained that Turks are particularly predisposed to surfing, as the sport requires high stamina and determination, which the Turkish people possess in abundance as they have proven time and again throughout history.

For this reason, as the TWSB, they have made it their primary goal to bring the sport closer to everyone, particularly to the youth, thus creating a surf culture in Turkey.

Surfing as a lifestyle

After all, surfing is not just a sport, it is a lifestyle that offers many advantages: It helps to improve a person's physical and mental condition and enables one to connect with nature, while teaching life lessons including balance and how to be brave, hustle and develop oneself.

As fun as surfing is, it can also be dangerous with inattention. So, 100% concentration is required on the waves, as carelessness can be punished by angry waves crashing on top of you.

When I told both that I feel most alive and closest to God on the waves, they shared my opinion since surfing is also generally recognized as a form of meditation. Therefore, surfers are usually people with a positive attitude, as both are. And the best thing about surfing is that you can start at any age.

The TWSB's vision is for Turkey to be one of the top 10 surfing nations in the world and for the country to participate in the Olympic Games. For this, they have set short and long-term goals.

One of the short-term goals is to provide a container of surfing equipment and surf instructors to each school located on the coast. In this respect, they have already started the preparatory work and have also made generous investments.

Furthermore, the surfers have founded their own brand called “Surf Truecore,” which provides surfers in need with surf clothes. It is essential to Üçyıldız and Şengül that everyone has access to surfing.

Therefore, they have used their private wealth on many occasions to this end in recent years. They consider the TWSB a family that welcomes every passionate, dedicated person and supports them in every way.

So far, they have impacted children and young people in coastal towns who have watched them surf and become enthusiastic about the sport.

They want to make this dream come true along the entire Turkish coast and also hope for support from the private sector through sponsorship.

Sponsorship quickly helps a company's reputation and financial position, but unfortunately, this fact has been largely unrecognized in Turkey for many years. It makes complete sense to appeal for the private sector to become more involved in such causes as President Recep Tayyip Erdoğan, as head of state, has always promised support to Turkish athletes.

In the long term, the TWSB wants to open wave pools across the country, where surfers can learn the craft in a protected environment – which do not necessarily have to be in areas by the sea.

Another important goal is that, with the approval of the Ministry of Education, they want to offer surfing as an elective subject at coastal schools, thus creating a generation of surfers. By doing so, they will contribute to Turkey's maritime opening, which gives the project national significance.

Surfing in itself has a fundamental national character as the sport has its own industry that generates national income. Surfing involves training, equipment and necessary investments such as good local infrastructure, appropriate gastronomy, organizing companies for tournaments and, above all, stores that market the lifestyle.

Tourism also benefits significantly from this highly regarded sport, which in turn generates income. Thus, people worldwide travel to various surfing hotspots to pursue their passion, which is usually not the case in other sports.

Üçyıldız and Şengül argued that all of this applies to Turkey, which is very attractive to surfers in terms of an excellent overall package of gastronomy, culture, history and quality hotel facilities.

They also praised the waves in Turkey. Even if they are not as big as on an ocean – where they reach up to seven meters – Üçyıldız explained, they can be of higher in quality as is the case with surfing hotspot El Salvador.

It all comes down to the total package, surfing world champion Kelly Slater once said while praising the newly discovered surfer's paradise of Nazaré in Portugal – in addition to its rogue waves.

Also, Üçyıldız and Şengül's foreign surfer friends were fascinated by the surfing experience in Turkey. Hence, there is every reason to market surfing on the Mediterranean coast, especially during the winter months when tourism is low, creating additional income for hoteliers and local businesses.

It could also create a tourism sector on the Black Sea, as it has big waves, since tourism in the region is suffering losses. Consequently, advertising via the official “GoTürkiye” portal – that Turkey is suitable for surfing – is essential and investments in infrastructure would be needed.

At the end, both mentioned that many surfers they meet at international events are very surprised to hear surfing is even possible in Turkey, proving that both the public and private sector should advertise this commodity.

Taking into account all of the above, it would only be logical for Turkey's public and private sectors to further support the TWSB and hence favor a maritime opening that will bring multivariate, particularly financial, benefits to the whole nation.