What is behind Armenia's military provocation on Azerbaijan's border? 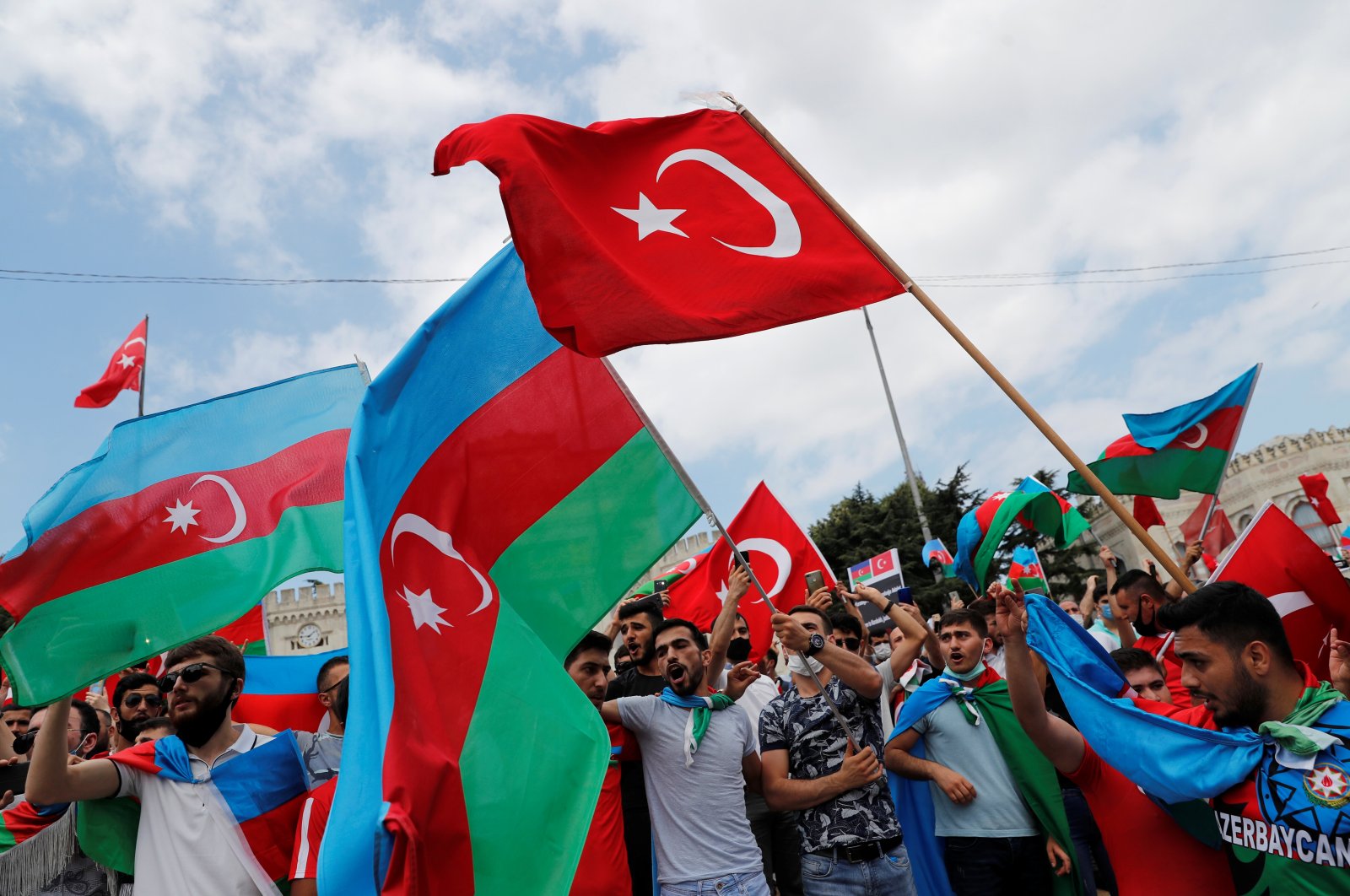 Azerbaijani men living in Turkey wave flags of Turkey and Azerbaijan during a protest following clashes between Azerbaijan and Armenia, in Istanbul, July 19, 2020. (Reuters Photo)
by Seymur Mammadov Jul 24, 2020 12:05 am
RECOMMENDED

The fierce skirmishes that broke out on July 12 around Tovuz, along the Azerbaijani-Armenian border, which claimed the lives of many, have caused enormous unease in the international community. Repeated appeals from Russia, the U.S., Iran, the Collective Security Treaty Organization (CSTO), the Organization for Security and Co-operation in Europe (OSCE), Minsk Group, authoritative international organizations and other groups calling on all parties to show restraint and refrain from any threat of force have so far had no effect.

In these difficult days for the Azerbaijani people – who heroically repelled the military provocation by Armenia, losing many noble sons in the process – it is gratifying to observe not only the solidarity of our citizens but also the support from our brothers in Turkey. Turkish F-16 fighters have made maneuvers along the border with Armenia in a show of support for Azerbaijan.

It is our brother Turkey that is the only country that has repeatedly made statements in support of Azerbaijan in an open form, threatening Armenia with retaliation for attacks on the Tovuz region. This will never be forgotten in Azerbaijan and is highly appreciated.

However, the situation on the border of the two conflicting countries remains very tense, because if the fighting continues for several more days, there is a risk of transferring the theater of military operations to the Karabakh front, in which case, the local conflict may eventually turn into a regional conflict. This is an outcome that officials in Baku have no interest in. It seems that Yerevan is determined to continue hostilities in order to involve regional players – Russia, Iran and even the CSTO – in this conflict.

Russia and Iran have made it clear that they support neither party. Armenia's plan to involve the CSTO in the border conflict has also failed miserably – the organization called on both sides to end hostilities and does not support Armenia for the simple reason that Baku has fairly good relations with member states of the organization. In addition, CSTO member states – Russia, Kazakhstan, Belarus, Kyrgyzstan and Tajikistan – are well aware that in the Armenian-Azerbaijani conflict Baku is a victim, and Yerevan is an occupier that has blatantly ignored four Security Council resolutions on the withdrawal of its troops from Azerbaijani territories – namely Nagorno-Karabakh and seven adjacent regions.

The escalation of the conflict at the border was preceded by several important developments.

First, a year ago a decision was made in Azerbaijan to transfer the state border with Armenia to the State Border Service (SBS). Before this, units of the Azerbaijani Defense Ministry were stationed here.

And thus, officials in Baku decided to reduce tension in these sections of the Azerbaijani-Armenian border – yet this provided the Armenian side with a good opportunity to organize a military provocation against the border guards. A year after the decision on the Azerbaijani side, Yerevan has implemented its long-awaited plan to provoke fighting in the Tovuz area of Azerbaijan. But why Tovuz?

Several strategically important pipelines pass not far from the site of hostilities – namely the Baku-Tbilisi-Ceyhan oil pipeline, the Baku-Supsa oil pipeline and the Southern Gas Corridor, which play an important part in ensuring Europe's energy security. Almost two months before the Armenian provocation – as part of the test launch of the Trans-Adriatic Pipeline (TAP) built to transport Azerbaijani gas to Europe – the first batch of gas from Azerbaijan reached the territory of Albania. In fact, this is an open provocation against oil and gas projects that meet the national interests of not only Azerbaijan but also Turkey.

With the launch of the oil and gas pipelines, Armenia was completely removed from all regional projects, including the Baku-Tbilisi-Kars railway project. Since the transport blockade by Azerbaijan and Turkey impedes the economic development of Armenia, the latter decided to try to lessen the economic opportunities Baku could enjoy through a military provocation in the Tovuz direction.

Secondly, after coming to power, Armenian Prime Minister Pashinian began to make exaggerated claims to his strategic ally Russia and the CSTO. Suffice it to recall the scandal with the arrest in Yerevan of the CSTO Secretary General Yuri Khachaturov and the many months Yerevan obstructed the process of electing a new secretary-general. The Armenian leadership tried to get the CSTO to openly support the country in the conflict with Azerbaijan. However, Pashinian was clearly made to understand that the military actions in Karabakh were a domestic issue for Azerbaijan according to international law and that this was not part of the CSTO's responsibilities.

He then realized what former Prime Minister Serzh Sargsyan's main mistake was – and that it would be necessary to advance military clashes not on the Karabakh front, but on the state border. I would like to note that military clashes with Azerbaijan took place just three days after the Pashinian's son Ashot Pashinian completed his military service. This coincidence is not accidental since over the past two years Pashinian's son has been in the enlisted army, the situation on the front line has been a little calm.

Of course, there is another reason for the Armenian provocation. The fact is that the military actions in Karabakh are perceived by the Armenians as taking place on foreign territory, far from the borders of Armenia.

Despite the large-scale propaganda work of Armenia, Armenians still deep down understand that Karabakh is a foreign land and that military operations have nothing to do with their security.

But the hostilities on the state border are still a threat designed to make Armenians forget about everything else – including the country's deep economic crisis, rising unemployment, poverty and the negative consequences of the pandemic for the economy.

Summing up the above, I will add that clashes on the border and on the Karabakh front would continue until the Armenian diplomats sit at the negotiating table and agree to conduct substantive negotiations with the Azerbaijani side on the Nagorno-Karabakh conflict.

The only solution to the conflict is compliance with the four relevant U.N. Security Council resolutions. Meanwhile Baku, in turn, is ready to provide Nagorno-Karabakh with wider autonomy under the jurisdiction of Azerbaijan with a guarantee of the full provision of civil, socioeconomic and cultural rights of Armenians living there in accordance Azerbaijani and international law.