Will George Floyd’s death reshape discourse on racism in Britain? 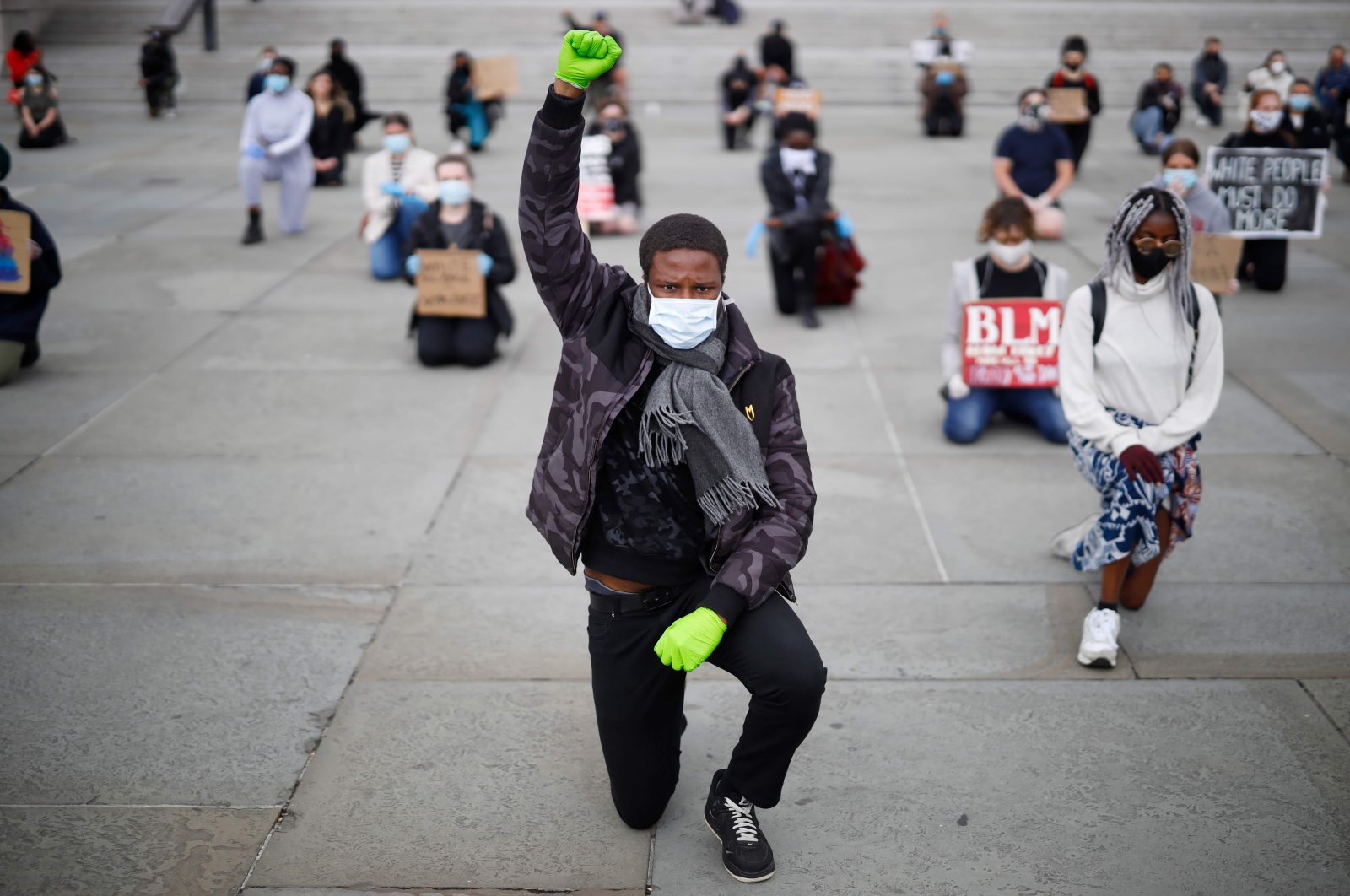 A protester makes a Black Lives Matter fist at a demonstration in Trafalgar Square in central London, to show solidarity with the Black Lives Matter movement in the wake of the killing of George Floyd, Britain, June 5, 2020. (AFP Photo)
by Irfan Raja Jul 07, 2020 12:05 am
RECOMMENDED

As the Black Lives Matter (BLM) movement continues to campaign and anti-racist dialogue and events like those in Bristol are unfolding, is the dawning of a new era of Britain, a truly equal society, on the horizon, or is it just a dream?

The black American George Floyd is a martyr of a long struggle. Some racism may have ended with his precious life. However, American police brutality targeting black people is not new, nor is racism.

Will Floyd rise as a hero against racism and a model of anti-racist movements?

Floyd's sacrifice has changed many things, including the possible introduction of bans on the fierce practice of chokeholds during arrests. The brief imposition of this ban in France was the first sign of his victory and of many more things to come. Maybe Floyd deserves a statue in place of slave trader Edward Colston in Bristol and beyond.

Manchester United and Liverpool's players took a knee to send a message of support to the anti-racist movement. Several councils, boroughs and educational institutions across Britain are showing solidarity with black people. But what is still missing? What happened in America has historic links with Britain.

The invention of racism

Professor Kehinde Andrews thinks that “racism is as British as a cup of tea.” Andrew's observations are based on the experiences of the British colonial population that has never earned equal status as “citizens” but, in fact, are “subjects to be used and abused as fits the will of the mother country.”

The story of colonialism is bleak as one flips the pages of British history to witness how British firms like the East India Company profited from slave labor and benefited from the vast natural resources of the Caribbean and India to power the Industrial Revolution.

Even today everything is in place to increase state profits. Looking at the current roles of Britain in modern warfare, arms trade and businesses, no wonder there has been little change in British colonial thinking.

Britain’s former Prime Minister David Cameron has acknowledged that, “Britain and the legacy of its empire were responsible for many of the world’s historic problems.” Surely Cameron is right because the idea of racism stems from colonialism.

Ibtihal Ramadan, an assistant professor and researcher at the University of Edinburgh, thinks that racism is a metaphor for oppression and should not be confined only to black people. Ramadan pointed to South Asians and the Arabic-speaking communities of North African origins also experiencing racism in the Middle East and beyond.

Although, in theory, the slave trade has been abolished and Britain has officially apologized for its role in it, what about the suffering and pain of those it enslaved? After all, sorry cannot bring a man back from the dead. Kris Manjapra, a specialist in global and transnational intellectual history at Tufts University, asked a relevant question: “When will Britain face up to its crimes against humanity?”

Although Floyd was brutally murdered by a white policeman in the U.S., protestors are out in the streets of London. What is the connection? One resemblance is the circumstances in which a few black people have died at the hands of British police.

British academic Kojo Koram argued that “systematic racism and police brutality are British problems too” and provided examples of four black individuals, namely Rashan Charles, Edson Da Costa, Sarah Reed and Sheku Bayoh, who died in an identical manner in Britain. Koram recalls the death of 20-year-old Charles in east London, “after being restrained by a police officer and choking on a package of caffeine and paracetamol in his mouth.”

Of course, these are just a few examples of tragic deaths of black people at the hands of British police. But what about everyday stops and searches? A list of opinion polls, surveys and studies have affirmed that blacks and Asians are facing discrimination in all walks of life.

Guardian journalist Afua Hirsch also probed into George Floyd’s death in the “British context” and believes, “The racism that killed George Floyd was built in Britain.” Hirsch reminds us “how it was Britain that ‘industrialized black enslavement’ in the Caribbean, initiated ‘systems of apartheid’ all over the African continent, suing the appropriation of black land, resources and labor to fight both world wars and using it again to reconstruct the peace.”

Evidence shows that in many ways, the distasteful accounts of modern-day racism trace back to the British colonial past in Africa, Asia and the Americas. Certainly, racism is one of the British inventions – for instance, the caste system in India.

So what has changed? Almost everything is in the same mode but decorated with modern phrases; for instance, “fair trade” for Africa is arguably nothing more than an illusion to show that Europe cares about Africa. Does it care?

But the reality is dissimilar to the “fair trade” claim, Conor Woodman explains in his book “Unfair Trade: The shocking truth behind ‘ethical’ business.” In reality, Nick Dearden, the director of the U.K. campaigning organization Global Justice Now, said, “Africa is not poor, we are stealing its wealth.”

Those taking part in anti-racist protests in Britain, the U.S. and beyond may well know the fact that their ultimate goal should not be limited to modifying police practices but to eradicate embedded institutionalized racism, not only in the police but in all walks of life.

So, what will happen next? Will the kneeling, erecting of Floyd’s statues, honoring him with medals and setting up charities in his name actually help? What ethnic minorities groups need is true, equal representation in British society.

Will there be fair pay and equal job opportunities for blacks and Asians?

This is the British elite’s unique style of dealing with political and social issues. History shows that once British elites overcome the challenge, they mostly forget those helping hands.

After World War II, Britain needed manpower to rebuild the country, so blacks and Asians were the crown jewels, but as soon as it regained its economic footing, the media and polity started to see the same communities as “troublemakers,” “problematic,” “threatening” to the British way of life and “outsiders” within mainstream British society.

That was in the past, and like many other empires, Britain also acts wrongly. Regret and moving forward should be a new standard. Jazmin Kopotsha, Stylist magazine's deputy editor, is honest. “Yes, the U.K. does have a race problem,” she says, so a way forward is to admit your mistake first and work out how “to make the U.K. less racist.” This can be done through collective efforts.