Will tensions cool in Emirati-Qatari relations? 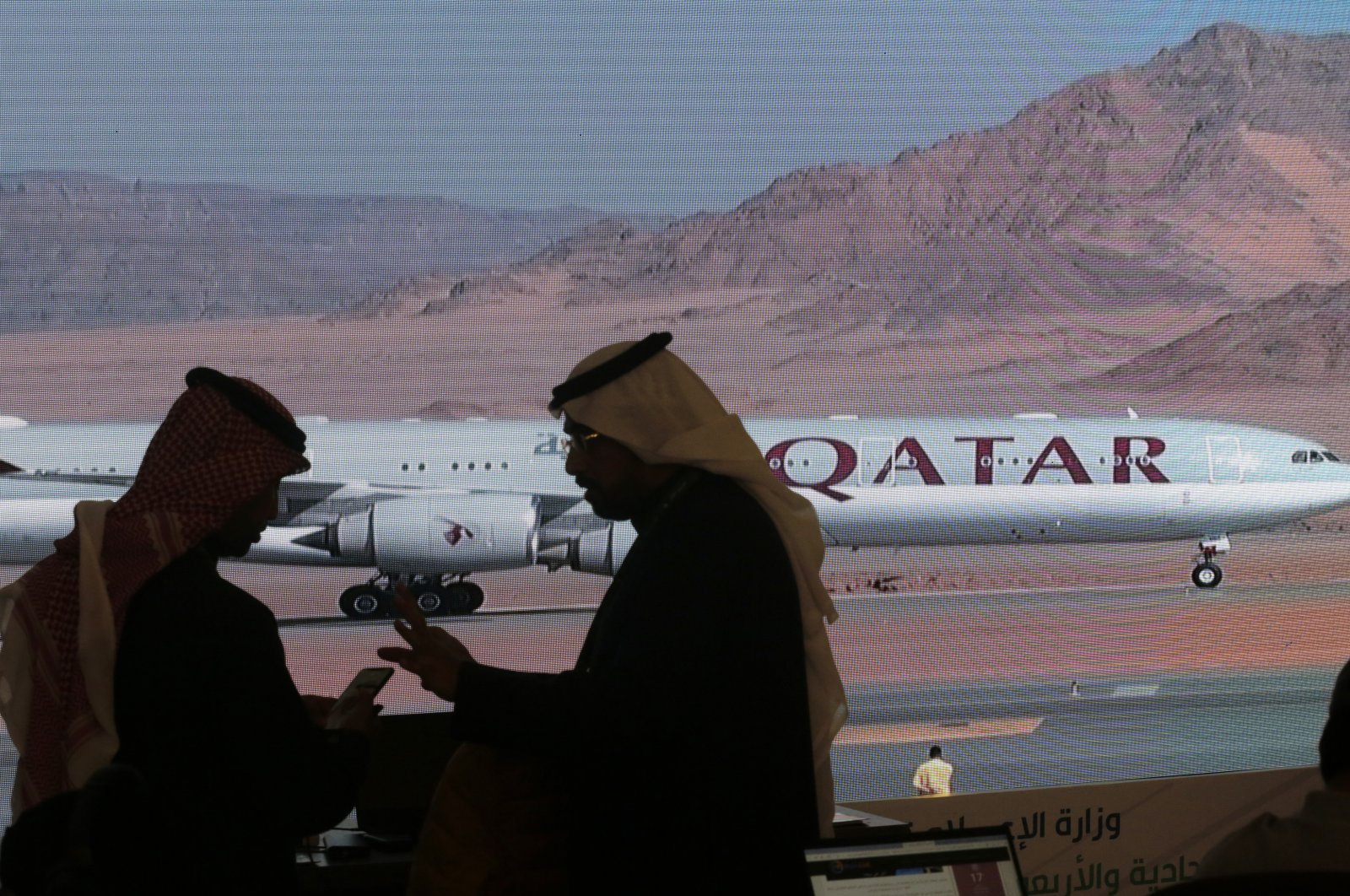 Journalists chat as a video of a plane carrying the Qatari delegation while landing at at Al-Ula airport is shown on a screen, where the 41st Gulf Cooperation Council (GCC) meeting takes place, Saudi Arabia, Jan. 5, 2021. (AP Photo)
by Giorgio Cafiero - Alexander Langlois Mar 09, 2021 12:05 am
RECOMMENDED

The concept of Gulf Arab unity remains elusive following the Gulf Cooperation Council’s (GCC) 41st summit, which led to the signing of the historic Al-Ula Declaration on Jan. 5. Despite bright prospects for Saudi-Qatari reconciliation, continued tension between Doha on one side and Abu Dhabi and Manama on the other suggests friction will, to some extent, continue defining intra-GCC relations.

The different blockading states (known as the Quartet) clearly went into the Al-Ula summit with different perspectives and motivations and left the summit with different understandings of how to interact with Qatar moving forward. In the weeks and months leading up to the GCC summit, Saudi Arabia had been taking a series of steps which led analysts to expect a continued de-escalation of tensions between Riyadh and Doha – a major contrast to the United Arab Emirates (UAE), which appeared to be merely doubling down on its strong position against Qatar during that time.

Shortly before the signing of the Al-Ula Declaration, the UAE’s then-Foreign Minister Anwar Gargash cautioned that there was “more work to do” in the process of resolving past and present disputes between the two countries.

“Left on its own, the UAE probably would have continued the boycott until Qatar agreed to truly reshape its foreign policy with regard to Islamism,” wrote Hussein Ibish of the Arab Gulf States Institute in Washington shortly after the summit.

“It may be telling that the UAE (was) represented by Mohammed bin Rashid al-Maktoum, the Emirati vice president and ruler of Dubai, rather than the crown prince of Abu Dhabi and de facto ruler of the UAE, Mohammed bin Zayed al-Nahyan, which may be seen as expressing Emirati reservations about the scope and prospects of the rapprochement.”

So why did the UAE sign this accord at the January 2021 GCC summit without Qatar meeting any of the demands set forth by the Quartet in 2017? It seems that earning some goodwill with the Biden administration and showing support for Saudi Arabia as a regional leader were important factors in Abu Dhabi’s decision.

“You could say Qatar has won,” according to the Emirati political scientist Abdulkhaleq Abdulla. “The cost of fighting was too high – there is a realization now that (Qatar) is the black sheep of the family, and we just have to put up with it.”

Yet more than two months after the historic GCC summit, the UAE (unlike Saudi Arabia and Egypt) has yet to reestablish diplomatic relations with Doha, signaling a clear rebuke of the reconciliatory nature of the meeting.

On Feb. 8, the UAE’s Assistant Minister for Culture and Public Diplomacy and former ambassador to Russia Omar Saif Ghobash spoke to CNBC’s Hadley Gamble about the Al-Ula summit. As he explained, Abu Dhabi’s relationship with Doha will not be “rosy” moving forward, but his country has decided to give Qatar the “benefit of the doubt” while expecting “confidence building measures” in the near future.

To that point, on Feb. 22, the UAE and Qatar sent delegations to Kuwait for a meeting on the Al-Ula agreement, according to Emirati state-run media. While in Kuwait, the two delegations discussed joint mechanisms and the implementation of the accord, emphasizing the need to preserve Gulf Arab unity in support of regional prosperity and peace.

At this meeting, Saudi Arabia received adulation from the Emirati and Qatari officials for Riyadh’s efforts to mend the GCC rift.

Despite this positive news, one can safely bet that Abu Dhabi will continue to have major ideological problems with Doha. The meeting came nearly seven weeks after Al-Ula and appears to avoid major points of contention, which is clearly an initial step toward reconciliation but anything but a guarantee that any Emirati-Qatari rapprochement is on the horizon.

Even if Emirati engagement with Qatari officials in bilateral talks on Kuwait’s “neutral” soil signals an eased UAE stance, tensions between the two countries will likely remain an important part of the Gulf’s geopolitical landscape moving forward.

What is the obstacle?

To be sure, the biggest stumbling block to Gulf Arab reconciliation in the future is the Abu Dhabi-Doha rivalry. The underlying issues that compelled the UAE to drive the Quartet’s actions against Doha in 2017 remain in the picture.

Fundamental disagreements over whether Gulf states should have supported Muslim Brotherhood power centers that emerged in and after the Arab Spring uprisings a decade ago as well as, more broadly, conservative actors in civil society throughout the region are at the heart of much of the UAE and Qatar’s problems.

With a vision based on authoritarian stability and a view that essentially all forms of political Islam amount to terrorism, it is a safe bet that the regime in Abu Dhabi will continue perceiving Qatar’s regional policies as dangerous and threatening to the UAE’s ideas of collective security in the Gulf.

Moreover, with Qatar being Turkey’s closest Arab ally, it is likely that Abu Dhabi will remain fearful of Doha’s close relationship with Ankara moving forward.

From the Horn of Africa to the Maghreb and elsewhere, tensions between the UAE and the Qatari-Turkish alliance are set to continue playing out.

At best, the Al-Ula summit eased the GCC crisis while failing to fully resolve it. Underlying ideological factors that have caused Abu Dhabi to fear Doha and the extremely low probability of Qatar trusting the Emirati leadership any time in the foreseeable future suggest this Arabian feud will persist even if the UAE no longer has Saudi Arabia committed to working with Abu Dhabi in efforts to pressure Doha into changing its policies.

As Abu Dhabi was the main driver of the Quartet’s actions against Doha from mid-2017 to early 2021, relations between the Emirates and Qatar will continue to profoundly impact the state of relations within the GCC family as well as geopolitical dynamics across the wider Arab region.

Given the Al-Ula declaration’s lack of detail, there are legitimate concerns that the issues which initially sparked the rift could trigger another power play against Qatar in the future.

*Foreign policy analyst who writes for the Diplomatic Courier and researcher in the U.S.-Sudan initiative