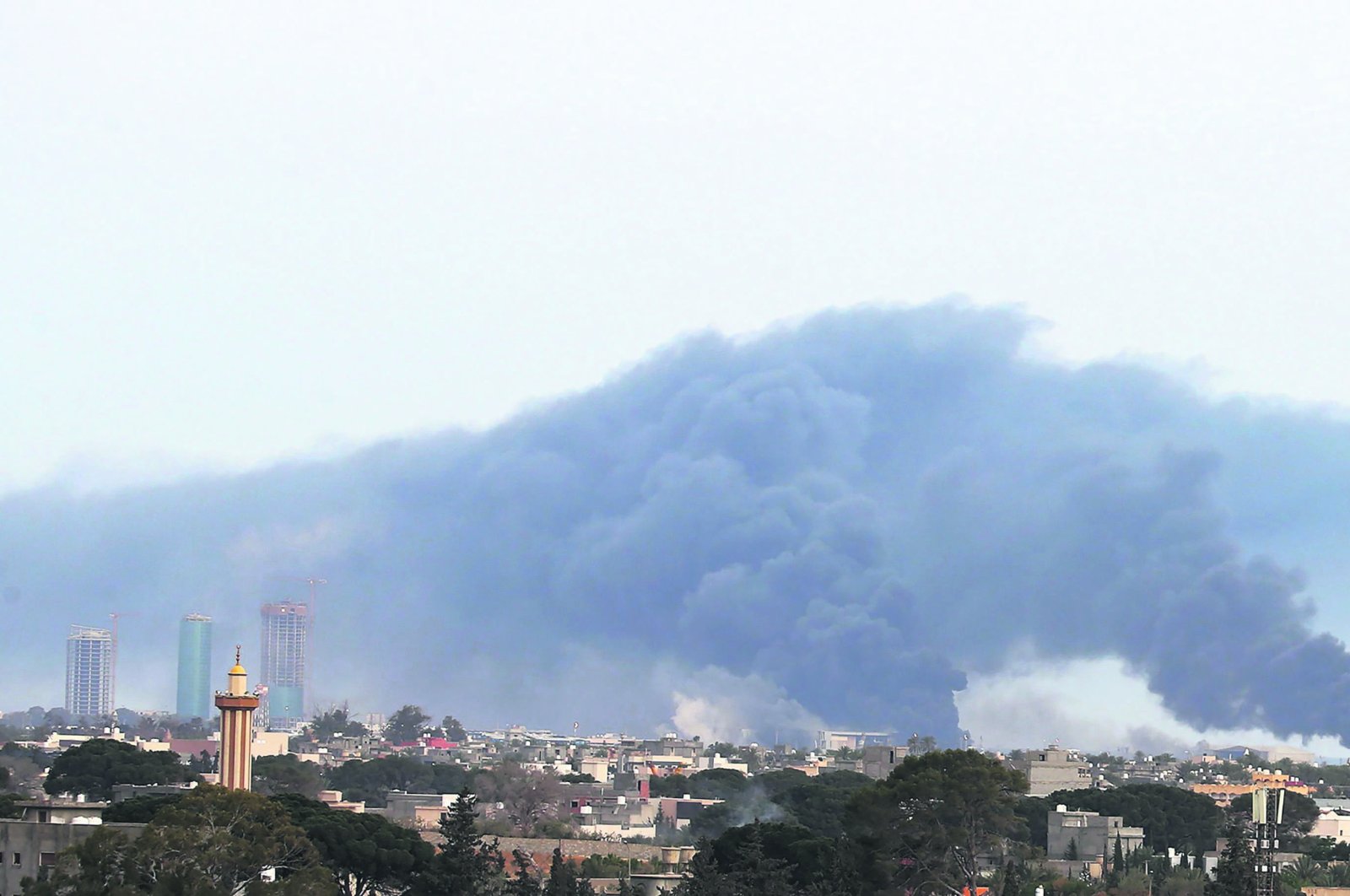 Smoke fumes rise above buildings in the Libyan capital Tripoli, during reported shelling by renegade commander Haftar's forces, on May 9, 2020 (AFP Photo)
by DAILY SABAH WITH AGENCIES May 14, 2020 10:14 am
Edited By Nurbanu Tanrıkulu Kızıl
RECOMMENDED

Militias loyal to Libya's renegade commander Khalifa Haftar continued to attack civilian infrastructure in Tripoli as they targeted a hospital in the war-torn capital Thursday.

Tripoli Central Hospital and some civilian settlements were targeted, according to a statement by the press center of the Libyan Army-led Operation Volcano of Rage.

It said the hospital will not be able to serve people due to the attack, so patients will be severely affected.

It noted that the situation poses a major threat to the fight against the coronavirus outbreak.

The militias, however, have denied carrying out the attack.

According to the United Nations, since the beginning of this year, seven health centers in the country have been struck 12 times.

At least four civilians, including a child, were killed when rockets rained down on the capital Tripoli and its only working airport Saturday. Fighting between Libya’s internationally recognized government and the forces of putschist Gen. Khalifa Haftar over Tripoli intensified Saturday with heavy artillery shelling the sole functioning airport in the capital city, setting jet fuel tanks ablaze and damaging passenger planes, government authorities and the U.N. said, while the Libyan prime minister criticized the international community for indifference to Haftar violence.

Last Thursday, Haftar forces shelled an area in Tripoli where the embassies belonging to Turkey and Italy in Tripoli was shelled by Haftar forces. Libya's Government of National Accord (GNA) said at least four civilians, including a child, were killed when more than 100 rockets rained down on the capital and its only working airport Saturday.

Libya's government has been under attack by Haftar's forces since April 2019, with more than 1,000 killed in the violence. It launched Operation Peace Storm on March 26 to counter attacks on the capital.

Seven U.N. agencies called on Wednesday for a cease-fire in Libya to try to stop the spread of the coronavirus, saying the international community “must not turn a blind eye to the conflict” in the North African nation where 64 cases of COVID-19 have been confirmed.

In a joint statement, the heads of the agencies said the confirmed cases include three deaths and have been reported in different parts of Libya, showing that “the risk of further escalation of the outbreak is very high.”

They said the conflict is having a “catastrophic effect on civilians, including migrants and refugees, across the country” and backed U.N. Secretary-General Antonio Guterres’ call for a global cease-fire to tackle the pandemic, which is especially needed now in Libya.

The agencies asked donors to “continue to show their generosity and stand by the people of Libya in their quest for peace and in this moment of great need.”

The agencies said the situation for many migrants and refugees “is especially alarming,” with more than 3,200 people intercepted at sea since January having been returned to Libya. The United Nations has repeatedly said the country is not safe and they should not be returned to detention.

The agencies said the U.N. has verified 113 cases of “grave violations” in Libya over the past year, including the killing and wounding of children and attacks on schools and health facilities. Since January, they said, “at least 15 attacks have damaged health facilities and ambulances and injured health care workers.”

Latest assessments found that as a result of the spread of the coronavirus, most cities in Libya "are facing shortages of basic food items coupled with an increase in prices,” the agencies said. They urged continued support for food availability, saying this is essential “so that this health crisis does not worsen by becoming a food crisis.”

The agencies also urged protection for vital water supplies, which have been deliberately targeted or indiscriminately attacked. They noted water is crucial for basic virus prevention measures including hand washing.

They also said humanitarian groups reported 851 incidents in which their personnel and aid items were constrained from entering Libya or moving within the country.