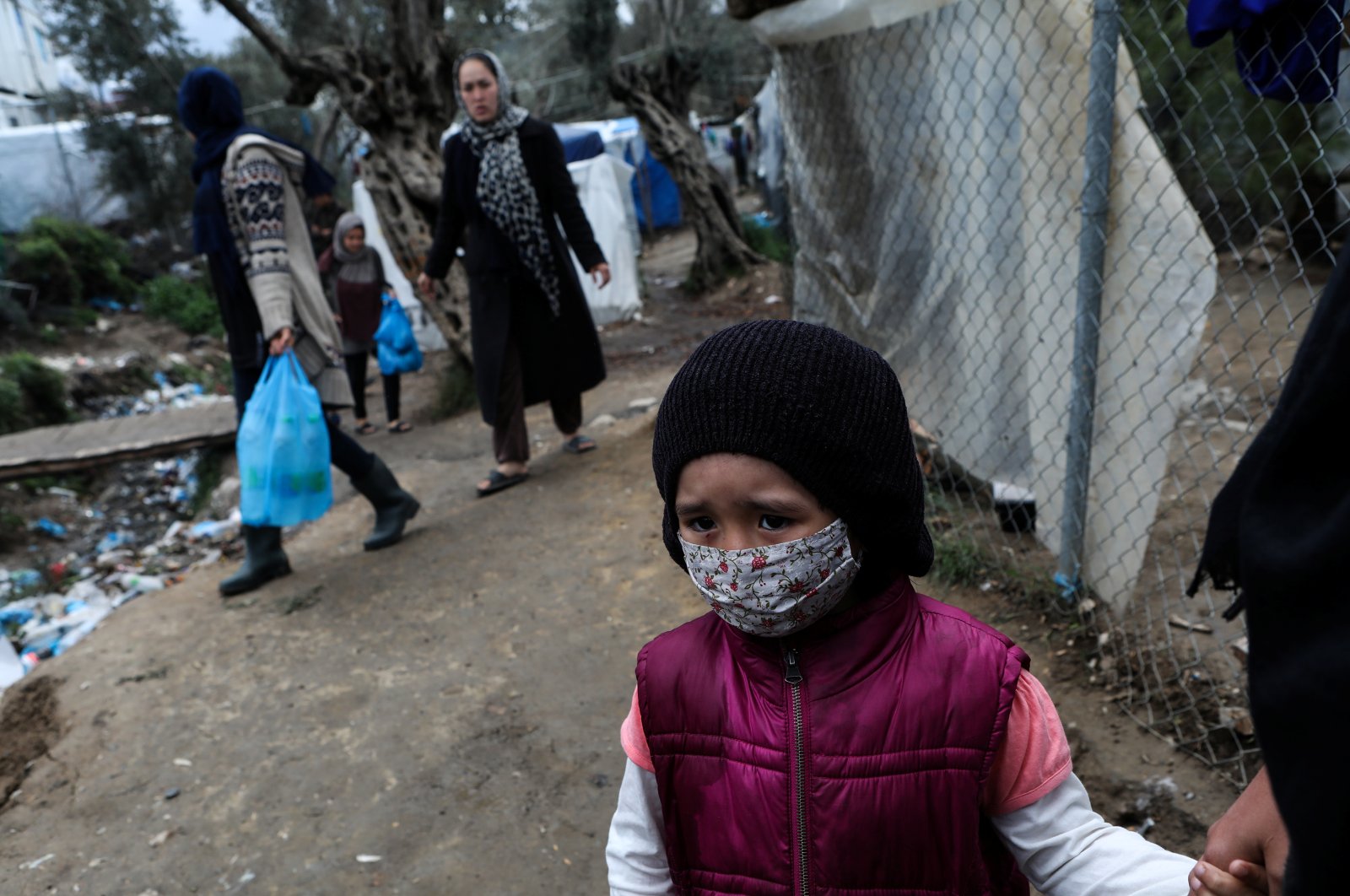 A girl wears a protective face mask at a makeshift camp for refugees and migrants next to the Moria camp, during a nationwide lockdown to contain the spread of the coronavirus disease, on the island of Lesbos, Greece, Thursday, April 2, 2020. REUTERS
by DAILY SABAH
Apr 07, 2020 12:04 pm

Thousands of child migrants are stuck on Greek islands as the coronavirus outbreak prevents any movement to European countries, while humanitarian agencies call for a quick response since the outbreak could be fatal for the youth living in camps.

According to the European Commission on Monday, there are difficulties in sending the migrant children currently staying in camps on the Greek islands to the eight European countries which previously expressed their willingness to take in the youth. The commission states that although these difficulties and subsequent delays are being attributed to the coronavirus, in reality, the outbreak itself is the reason why the evacuation must start as soon as possible. Still, currently, there is not a definite day for the evacuation to start.

The commission’s spokesperson for migration, domestic affairs, and citizenship, Adalbert Jahnz stated Monday that although there are no standard procedures established yet for the children who are staying alone in the camps to be sent to the volunteer countries, the evacuation could actually start at once as many of the conditions are already met.

Jahnz stated that Greek authorities have already determined the children who can be sent to the volunteer countries and thus there are no obstacles to beginning the evacuation. The spokesperson also heralded that in order to establish the technical details, the International Organization for Migration (IOM), United Nations High Commissioner for Refugees (UNHCR) and Greek authorities will come together again in the upcoming days.

Last month, on March 6, eight European countries, including Germany, Luxembourg, France, Lithuania, Ireland, Portugal, Croatia, and Finland, declared that they are volunteering to take in the unaccompanied migrant children who are in the camps on the Greek islands. It was initially planned for the Greek authorities to complete the procedure on which children should be sent where. The plan is to evacuate at least 1,600 unaccompanied minors from camps in Greek islands.

The European Commission, the United Nations, and the Greek authorities are the jointly responsible parties for the coordination of the children’s evacuation. According to the commission, although there may have been delays in the actual evacuation, the underage migrants who are currently staying at the over-crowded camps can be taken from those places early on and be resettled in hotels.

Last week, 50 deputies from Germany’s Christian Democratic Union (CDU) party wrote a letter to the commission, demanding immediate action regarding the evacuation of the migrant children. The deputies express that because of the pandemic, children should be evacuated as soon as possible. The letter reportedly warned the commission of a possible outbreak of the virus within the camps, which could be catastrophic.

While these debates on the fate of the migrant children continue, Pro Asyl, an immigration advocacy organization, states that the camps on the islands should be evacuated altogether due to the coronavirus threat.

Illegal migrants take the Aegean, Mediterranean and the Black Sea routes to access European countries. The Aegean is the most popular as it is dotted with Greek islands in close proximity to Turkish shores. Greece has been widely criticized for using excessive force, including the firing of water cannons and tear gas to repel incoming migrants. Human Rights Watch (HRW) urged Greece and the EU to respect human rights in light of Turkey's new policy of refusing to halt migrants and refugees trying to leave for Greece.

After waiting in vain for around a month camped out on the border to the EU, migrants, and refugees on March 27 requested to abandon the area and return to the provincial migration authorities in Turkey's northwestern Edirne, as Greece looks nowhere close to allowing their entry.

While responding to the requests, Turkish officials have informed other migrants and refugees about the risks posed by the spread of the coronavirus if they continue to remain outdoors. Those convinced by officials have since joined the ranks of those expressing a willingness to leave the area. The returnees have since been transported to available guesthouses via buses sent by the Edirne governor's office.

As part of COVID-19 measures, the migrants and refugees will then be sent to appropriate locations once the quarantine period is over.

There are over 38,000 migrants crowded into camps on the Greek islands of Lesbos, Samos, Chios, Leros, and Kos despite an official capacity of 6,200.

Island officials and residents have told the Greek government that after five years on the front lines of the European migration crisis, they are no longer prepared to accept thousands of asylum-seekers into their midst.

The conservative government which came to power in July has announced that the island camps on Lesbos, Samos, and Chios will be shut down this year, to be replaced with new, smaller facilities that are to be operational by mid-2020.

But while the administration of Prime Minister Kyriakos Mitsotakis tries to alleviate the problem by relocating thousands of migrants to other parts of Greece, many communities on the mainland are attempting to stonewall the move.