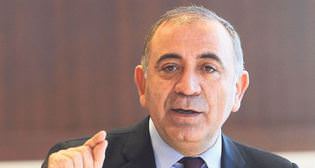 by Feb 23, 2014 12:00 am
A leading member of Turkey's main opposition party, Gürsel Tekin, says Gül must veto the country's new Internet Bill. "We are facing a modern coup," said Tekin, the Republican People's Party's (CHP) vice chairman, referring to Turkey's new Internet bill at a brunch meeting organized with journalists. Urging Turkish President Abdullah Gül to take action, Tekin noted that otherwise, Gül would become a part of the coup. In reference to allegations that requests for an investigation into CHP members have been submitted to the parliament, Tekin noted that the CHP is not afraid of any inquiry and underlined the party's stance that it has always advocated for the abolishment of parliamentary immunity.

Although Tekin acknowledged the AK Party's latest efforts, particularly parliament's approval of the Democratization Package abolishing Specially Authorized Courts, he criticized its timing. He also slammed the judicial bill restructuring the Supreme Board of Judges and Prosecutors (HSYK). "Why now? Is it because of the Dec. 17 investigations?" said Tekin referring to the Dec. 17. operation, which saw three former cabinet ministers and businessmen linked to the AK Party government arrested under the orders of public prosecutors under the HSYK. Claiming that Turkey's benefits are being ignored and the reputation of the country is suffering, especially in international politics, Tekin called out to Gül. "I hereby would like President Gül to take action and prevent our communication rights to be revoked and reject the Internet bill. Secondly, the judicial reform bill should be returned to the parliament to be revised. Otherwise, Gül will become an accomplice of this disgrace. I trust that he can be sensitive about these new regulations and put 76 million Turkish people's interest before his," concluded Tekin.