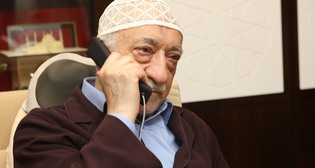 Phones of around 3,000 journalists, politicians, intellectuals and others were illegally wiretapped by the Gülen Movement in a bid to extract information that could be exploited, it is claimed

A new file obtained by Turkey's Yeni Şafak and Star newspapers exposed how more than 3,000 people have been wiretapped over a period of three years, including Daily Sabah Editor-in-Chief Serdar Karagöz and Ankara correspondent Ali Ünal. Media outlets claim the Gülen movement is behind the wiretapping scandal.

Named by Star newspaper as the biggest ever wiretapping incident, the Gülen movement unlawfully wiretapped 3,000 people under the cover of the imaginary Selam Terror Organization. Prosecutors Adem Özcan and Adnan Çimen allegedly initiated the wiretapping based on an investigation into the imaginary organization. A grand total of up to 300,000 people had their conversations tapped, including friends, family and those who contacted the alleged suspects chosen by the Gülen movement. The list included prominent names from the media, politics and business sectors; communities, pious foundations and non-governmental organizations. Headquarters of banks, companies and religious foundations, newspaper and television phone centrals, ministries, public institutions, universities, news agencies, charity organizations and intellectuals were all targets. More importantly, politicians including Turkey's Prime Minister Recep Tayyip Erdoğan, head of the governmental intelligence agency Hakan Fidan, and prominent members of Turkey's main opposition parties were also wiretapped, including the Republican People's Party (CHP), Nationalist People's Party (MHP) and Peace and Democracy Party (BDP).

Bülent Yıldırım, the president of humanitarian aid organization IHH was also wiretapped. Turkish intelligence agency trucks were stopped and raided by Gülen movement agents who wrongfully claimed the trucks were carrying arms to al-Qaeda in Syria. This indicates the Gülen movement may have overheard Mr. Yıldırım's phone calls prior to planning the raids.

The incident has received criticism from across the political spectrum. Commenting on the revelations, MHP Chairman Devlet Bahçeli expressed they were aware of the fact that the MHP headquarters were wiretapped. Özcan Yeniçeri, an MHP parliamentarian from Ankara, described the incident as pushing Turkey into an authoritarian security state. Bengi Yıldız, BDP's parliamentarian from Batman, has also supported the government's stance on the issue.

"This incident clearly indicates how judges and prosecutors exploited their authority." Yıldız advised the opposition and government to work together to resolve the issue. Likewise, CHP Group Deputy Chairman Akif Hamzaçebi voiced his concern on the issue. "If these allegations are true, the issue should immediately be investigated," he said, adding that those who were aware of the issue and kept silent should also be questioned and punished. CHP Istanbul parliamentarian Ali Özgündüz said he was disappointed about the scandal as it clearly indicated legal instruments were used in illegal manners. Hüseyin Aygün, a CHP parliamentarian from Tunceli, also criticized the incident. "I am a leftist, socialist. The movement has probably mistaken me for a member of a conservative organization named Selam," he said.

Despite criticism from a number of party members, CHP leader Kemal Kılıçdaroğlu claimed the AK Party does not have the right to complain and avoided criticizing the scandal, emphasizing the internal rivalry that is growing within the party.

Prominent figures of the AK Party emphasized the importance of the incident. "This is unacceptable. It is no longer the problem of the government alone, but everyone's," said Energy Minister Taner Yıldız. He also said nobody has the right to act as though they own the state. Instead, it is only up to the people to determine who will have the authority to rule the government. Deputy Prime Minister Beşir Atalay shared similar sentiments, saying the issue clearly speaks for itself. The Turkish Grand National Assembly's (TBMM) Deputy, Chairman Sadık Yakut, touched upon the legal implications of the issue and said Turkey is governed by the rule of law. According to Yakut, any sort of evidence obtained through illegal means is void. He noted if the movement obtained evidence through their illegal wiretapping, they would be unable to use it as it was obtained through unlawful means. The AK Party's General Vice President, Numan Kurtulmuş, was also a target of the wiretapping scandal, along with his wife, son and many of his coworkers and relatives, indicating a high degree of violation of personal privacy.

Levent Baştürk, an academic at Osman Gazi University and a victim of wiretapping, said he was put under scrutiny for writing on the movement in his works. "I highly suspect Gülenists who infiltrated into the judiciary have spoiled the outcome of Ergenekon cases," Baştürk said. Yahya Bostan, Sabah's Ankara news editor, also expressed his dismay and said he finds it shameful for Turkish democracy to experience this attack by an unidentified imaginary organization. "The Turkish democracy is facing a different threat after years of successfully fighting military supremacy," said Bostan, who promised to file an official complaint.

According to Erdoğan's statements from last week, some of the wiretapping devices are not located in Turkey, which became evident after the National Intelligence Agency's (MIT) extensive searches. It is probable that the devices have been taken outside of Turkish borders, making it possible to wiretap individuals from abroad. Ferhat Ünlü, a journalist at Sabah, explained there are two types of wiretapping devices, the first one being used for audio surveillance and the second used for phone surveillance. Wiretapping of phones is conducted through devices worth millions of dollars functioning as a cyber base station. In this case, the base station was illegally established by the movement to wiretap thousands of people based on the electronic serial number, or IMEI, of their devices. The Gülenists used legal wiretapping devices of security forces to start a cover investigation into the imaginary Selam organization.

The primary motive of the Gülen movement is thought to have been to enable the group to convict thousands of politicians, journalists, writers, and nongovernmental organization officials after infiltrating into state institutions and staging a coup.

Fethullah Gülen's lawyer, Nurullah Albayrak, recently made a statement in response to the allegations.