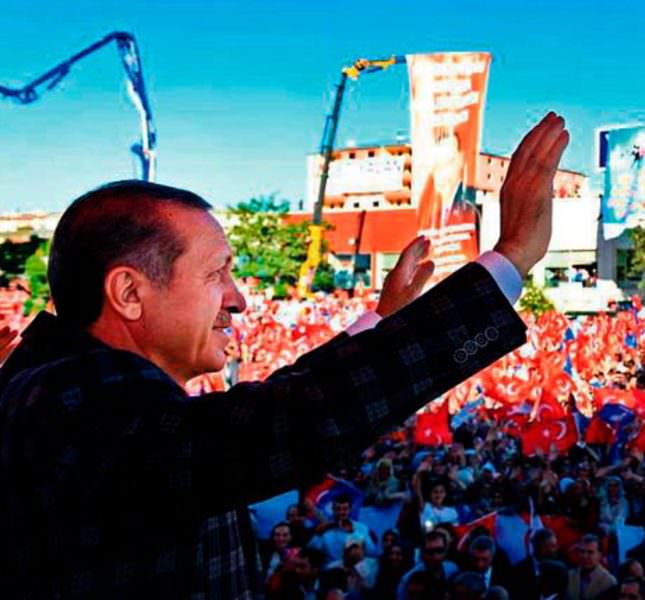 Prime Minister Erdoğan touched on current issue, including the Dec. 17 operation, the Gülen movement's wiretapping of political figures and the CHP's alliance with the movement to discredit the AK Party

Turkey's Prime Minister Recep Tayyip Erdogan's local election campaign, which began Saturday, will continue full steam after the first campaign stop in Sivas. Erdogan then held rallies in two cities in western Turkey on Sunday.
Erdogan is expected to hold rallies in nearly 50 cities in the run-up to the local elections, including Usak, Burdur, Balıkesir, Eskisehir, Denizli, Mugla and Mersin this week. Issues that are expected to be on the agenda during the upcoming campaign season are the Dec. 17 operations, boosting Turkey's economy, the Gülen Movement's wiretapping of politicians and the main opposition Republican People's Party (CHP) support to the Gülen Movement. The movement, which is headed by a cleric in self-imposed exile in the U.S., infiltrated the police and judiciary in an attempt to undermine the government and discredit the AK Party.

Despite the "black propaganda" purported by certain media outlets and the Dec. 17 operation, a huge crowd gathered in Afyon Karahisar and Kütahya to support the AK Party in the upcoming local elections to be held on March 30.Speaking in Afyon Karahisar, Erdoğan slammed the Gülen movement and highlighted the illegal practices of infiltration of government institutions and wiretapping of business, civic, and political leaders. "This gang in the judiciary is completely illegitimate," said Erdoğan. "They illegally tapped numerous politicians, journalists, bureaucrats and ordinary citizens. They threatened them with leaking their records to the mainstream and social media."

He claimed that the Republican People's Party (CHP) and Nationalist Movement Party (MHP) succumbed to the threats of the movement.Criticizing the alliance between the CHP and the Gülen movement, Erdoğan released a document issued by the CHP in the 1940s that banned the works of Said Nursi, whose Islamic doctrines are supported by the CHP's now ally, the Gülen Movement and its leader Fethullah Gülen. He also accused the CHP of intransigence and slandering in order to prevent the improvement of Turkey's infrastructure. "The CHP opposed Turkey's third bridge project in Turkey similar to their objection of all investment projects in Turkey's history, such as the Bosphorus Bridge, the Second Bosphorus Bridge, and the Marmaray, an underwater railway tunnel, said Erdoğan.
Erdoğan said the ruling AK Party made many improvements to Afyon Karahisar, including upgrades to its health and education services.
Erdoğan will participate in the opening ceremony of investments in excess of one billion lira in Afyon Karahisar. Erdoğan criticized the Supreme Electoral Council of Turkey (YSK), which made a decision on the continuity of CHP's candidacy in the district and asked them to be fair. He recalled the YSK's previous decisions against parties previously that experienced the same difficulties. Last week, CHP delivered its candidacy list to the Sarıyer District Electoral Office past deadline. The authorities initially banned the CHP from going to the polls in Sarıyer district, but later overturned the decision. Following his rally in Afyon Karahisar, Erdoğan headed to Kütahya the same day. Touching on the AK Party's win in three national and two local elections, as well as two referendums, Erdoğan said his party always follows the national will and claimed that the Movement tried to tarnish Turkey's image and discredit the AK Party.
According to the prime minister, Gülenists ignited the Gezi Park protests last May but when failed to destabilize Turkey, the organization aimed to attack the government through the Dec. 17 operation.

The Gülenists chiefly aimed to hinder Turkey's development and its legitimate governing party elected by the people. He stated that the AK Party would never make concessions from its investments in the fields of education, health, security and transportation. He said the party will continue to build dormitories in Turkey for the students. Highlighting his party's investment in health services, Erdoğan vowed to continue to invest in building hospitals. He referred to the long lines in hospitals and problems finding medicine during the period that the current main opposition CHP leader Kemal Kılıçdaroğlu was the head of Turkey's Social Security Institution (SSK). He said all of those problems were solved under the AK Party rule.