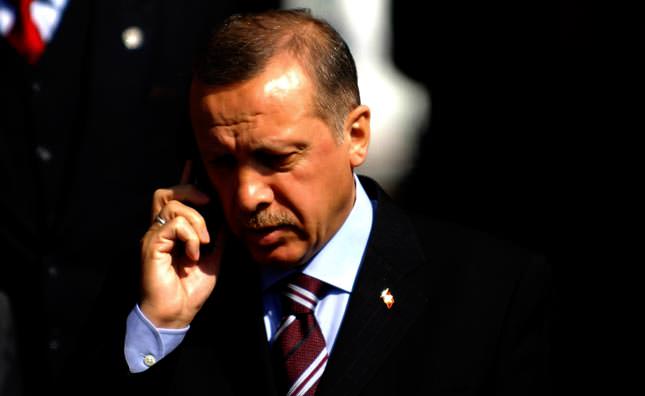 by Feb 26, 2014 12:00 am
The Turkish prime minister had a series of intense telephone conversations with the president of Northern Cyprus, Libyan prime minister and the U.N. Secretary-General Ban Ki-moon. President of the Turkish Republic of Northern Cyprus (KKTC), Dervis Eroglu, briefed Prime Minister Recep Tayyip Erdogan Monday regarding the on-going peace talks on the island.

It was reported that Erdogan expressed that Turkey's positive contribution to the reconciliation deal between Turkish and Greek Cypriots will continue.

The main focus of Erdogan's phone conversation with Libyan Prime Minister Ali Zeidan was the increasing violence in Tripoli and Benghazi.
Erdogan stated that Turkey would continue to provide full support for the reconstruction of Libya, which recently celebrated the third anniversary of the Feb. 17 Libyan Revolution.

When Erdogan expressed his concerns over the recently increasing violence in Libya, his Libyan counterpart Zeidan assured the Turkish prime minister that Libya was determined to ensure security and mentioned their efforts to uphold democracy in the country. Erdogan said national dialogue and compromise were of utmost importance in handling the on-going issues in Libya. Zeidan and Erdogan also discussed bilateral economic and commercial relations.

During the conversation, Erdogan said Turkish investors and contractor companies incurred loss due to the internal tension in Libya and that any concrete step to be taken by Libyan government will be welcomed. Zeidan said an official Libyan committee is scheduled to visit Turkey to negotiate the possible solutions that will ease Turkish investors' problems in Libya.

According to the prime ministry's source, Ban Ki-moon called Turkish prime minister and held talks on the Central African Republic's security issue. Erdogan had another conversation with Ban Ki-moon on Monday.

The U.N. secretary-general stated that they would like to see Turkey contribute to the peacekeeping force, established to provide security in the Central African Republic as part of the European Union Military Mission.

The Muslims residing in the Central African Republic have been affected by the unstable security and deepening humanitarian crisis in the region, said Erdogan. He further underlined that public security should be provided by the interim government that was established after the N'Djamena Summit held by the Economic Community of Central African States (ECCAS) on Jan. 9-10.

Erdogan confirmed that Turkey will continue to provide aids to the people of Central Africa. Sabah newspaper reported the details of a telephone conversation between Turkish Prime Minister Recep Tayyip Erdogan and U.S. President Barack Obama on Feb. 20. Regarding the conversation, Erdogan said they discussed the new Internet amendments, and the structure of the Supreme Board of Judges and Prosecutors (HSYK). In the U.K., members of the judiciary are elected by the parliament, while in Turkey only one quarter of the HSYK is selected by the President. HSYK has its own system so no intervention is possible, said the prime minister.

Referring to Fethullah Gülen, leader of the Gülen Movement, in self-imposed exile in Pennsylvania, Obama accused Erdogan of intervening in the internal issues of the U.S. "We do not interfere in your internal matters, however, the individual you are currently hosting in your country is meddling with Turkey's internal affairs," replied Erdogan, in reference to the movement that has infiltrated Turkey's police and judiciary. Obama's response to Erdogan's criticism was, "Noted!" indicating that the matter will be handled.