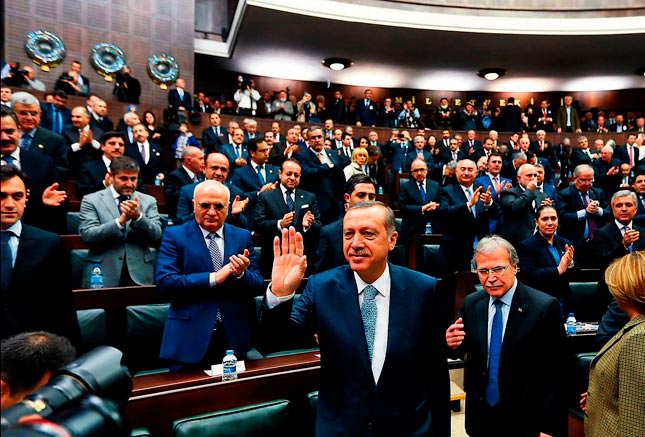 Phone recordings supposedly between the prime minister and his son are seen as phony by experts, while others say this is just the Gülen Movement’s way of creating diversion to distract the public over the wiretapping scandal

A series of fake tape recordings of Recep Tayyip Erdogan and his son, Bilal Erdogan, was published online Monday night by people allegedly affiliated with the Gülen Movement.

The move is seen as an attempt to cover up and divert attention away from the recently exposed wiretapping of thousands of people by the movement.

A close investigation of the recordings reveals a number of inconsistencies. The tapes claim the prime minister called his son on Dec. 17 to warn him about the Gülen operation and allegedly suggested his son hide the money in their house. The tapes falsely placed the prime minister in Ankara on Dec.17 when the conversation with his son allegedly took place. However he was, in fact, at a public ceremony in Konya.

The recording is dated 11:17 a.m., yet the prime minister was waiting to make his speech at the ceremony at this time. Additionally, at 03:39 p.m., the prime minister was attending a meeting with Najib Mikati in Konya, yet the tape recording claims he was in Ankara at this time talking to his son for more than two minutes. There are a number of video recordings of Erdogan in Konya at the time of the alleged phone conversations.

Tweets confirming Erdogan's presence at the public ceremony in Konya at the time disprove the allegations. Minister of Justice Bekir Bozdag criticized the tapes, noting they were "immorally fabricated" and that legal proceedings would be taken to serve justice.

Responding to questions on the issue, Bozdag warned that more fabricated tapes could surface in the coming days and expressed his disappointment that the perpetrators "know no limit when it comes to reserving the means to degrade people's dignity, honor and pride to denigrate and discredit their status in society."

The degree of immorality "leaves [him] speechless," he said. AK Party Secretary General Haluk Ipek also said legal proceedings have been initiated and necessary action would be taken after the party's lawyers investigate the issue. In an effort to analyze the issue, Daily Sabah contacted an expert sound engineer who asked to remain anonymous.

According to the expert, there are serious concerns about the validity of these tapes and extensive analysis should be conducted to determine whether they have been fabricated. For instance, it is very easy to fabricate tapes as was the case with Nationalist Movement Party (MHP) leader Devlet Bahçeli. On Feb.6, Bahçeli's speech was manipulated to make it sounds as though he said: "Abdullah Öcalan is a fighter for freedom and peace. He is not a terrorist. The Turkish state is the terrorist. I salute the hero in Imralı." These remarks are highly controversial as Bahçeli supports a nationalist ideology that considers Abdullah Öcalan a terrorist. Bahçeli's speech was, in fact, created from a 1999 speech by Sivan Perwer, a popular Kurdish singer.

The tapes even received criticism on social media networks from those who personally oppose Erdogan's policies and ideology. Mehmet Faraç, a former journalist at Cumhuriyet newspaper, claimed on his Twitter account the tapes did not sound authentic and resembled a theater performance. He highlighted the absurdity that the fake recordings have Erdogan telling his son to hide the money but later saying they are being wiretapped. He also noted that the timing of the tapes' publication was suspicious, coming only one day after the movement's wiretapping scandal broke. The Public Prosecutor of Ankara started an investigation into the tape recordings and will be analyzing whether the tapes were fabricated and who put them forward.

Speaking at an AK Party group meeting, Turkish Prime Minister Recep Tayyip Erdogan yesterday slammed the Gülen Movement and accused it of fabricating recordings of allegedly wiretapped conversations between him and his son. The latest recordings, which were posted on social media websites on Monday, purportedly contain a conversation between Erdogan and his son, Bilal Erdogan, in which they discuss ways of transferring large amounts of cash, valued at nearly $1 billion, from their home.

According to information accompanying the recording, the conversation was held on the morning of Dec. 17, the day that the sons of three ministers and renowned businessmen in Turkey were taken into custody and some of them arrested in connection with a police investigation carried out by members of the Gülen Movement, which is aiming to undermine the government in Ankara.

Turkey's prime minister responded sharply to the alleged conversation yesterday. "On Monday, they fabricated a stage and deliberately leaked it to the social media. I have been calling on them for weeks to play their cards, but they immorally fabricated and [posted] these [doctored] recordings," said Erdogan in the meeting.

Erdogan described the alleged voice recordings of conversations involving his son as a vile attack on Turkey's legitimate prime minister. "There is no allegation that we cannot answer," said Erdogan. Portraying the Gülen Movement as a virus trying to spread within the state, Erdogan said the movement is aiming to control Turkey and its governmental agencies. "We will disregard those campaigns to discredit and slander until the local elections [on] March 30, because if we surrender to their dirty operations, there would be no way to serve the country," said the prime minister.

He added that if he were to lend credence to the released recordings it would be an injustice to all prime ministers and ministers that follow him and to the whole of Turkey. Turkey's main opposition parties, the Republican People's Party (CHP) and the National Movement Party (MHP), held emergency meetings to discuss the alleged recordings of Erdogan and called on him to resign, claiming that his government was no longer legitimate. Erdogan responded by saying that the opposition parties were only trying maximize their own interests. He also touched on the latest findings in the Gülen Movement's wiretapping scandal.

According to reports released on Monday, the Movement is being behind some 7,000 illegal wiretaps targeting government officials and supporters. "They tapped ministers, deputies, vice presidents, advisors, bureaucrats and non-governmental organizations, journalists, writers for at least three years," said the prime minister.

Slamming the wiretappings as illegal, Erdogan said the newly-passed judicial bill to restructure the Supreme Board of Judges and Prosecutors will facilitate an investigation into the Gülen Movement's operations.