Syriacs get deed for Mor Gabriel

by Emre Can Dağlıoğlu 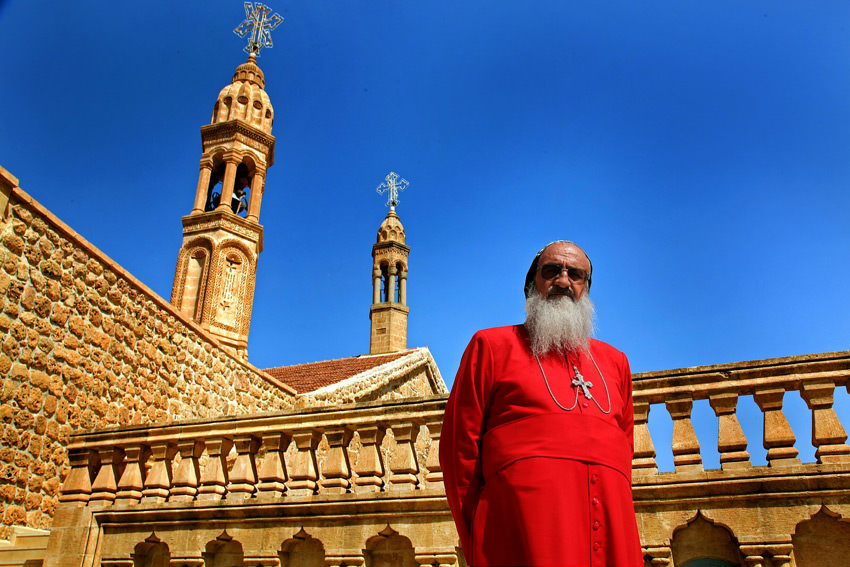 The deed for the 1,700 year-old Mor Gabriel Monastery located in the southeastern province of Mardin is handed over to the foundation overseeing the property.

The property deeds of the Mor Gabriel Monastery, the 1,700-yearold historic monastery located in the southeastern province of Mardin's Midyat district, have officially been delivered to its rightful owner, the monastery's foundation on Feb. 25. In the fourth democratization package, declared in Oct. 2013 by Prime Minister Recep Tayyip Erdogan, it was promised that "the land of the Mor Gabriel Monastery will return to the monastery's foundation."

The land ownership controversy received wide attention starting in 2008, when the Forestry Ministry, the Land Registry and Cadastre Office and the villages of Yayvantepe, Çandarlı and Eglence asked the Treasury for land registry certificates. The Treasury then sued the monastery for allegedly "occupying" its 276,000 squaremeter of land belonging to the villages.

However, the Midyat Land Registration Court quashed by deciding that the monastery declared these lands in 1936 and has tolled for that since 1937. On the contrary, the Supreme Court Assembly of Civil Chambers gave a verdict including that the land inside and adjacent to the monastery belongs to the State, and the lawsuit was finalized in 2012, recognizing the monastery as an "occupier." But the case was then taken to the European Court of Human Rights (ECHR) by the monastery's foundation.

Özcan Geçer, one of the editors of suryaniler.com, a web-site on Syriac cultural heritage, told Daily Sabah, "The process would be finalized with the same absolute order in ECHR; however, we did not prefer such a way."In October 2013, the monastery's foundation applied to the Directorate General of Foundations for the return of the lands of the historic Mor Gabriel Monastery to the Syriac community pursuant to the fourth democratization package.

The Assembly of Foundations, the highest decision-making body of the general directorate for foundations, concluded that there is no problem with applying for land registration.

In this week, the return process was officially finalized by delivering the deeds to the monastery's foundation and it is marked as one of the largest property restorations in the history of the Turkish Republic in terms of size.

"It was an undesired case. It made us upset to acknowledge such an ancient cultural and sacred asset as an occupier. This progress boosted our morale. These [events] should not be experienced for peace of the people," said Geçer. "The approach of the present government towards us is positive and substantial steps were being taken," he concluded.

The other problematic issue that Geçer thanked the government for resolving is the education in Syriac. On June 6, 2012, the Syriacs' application to the Directorate for National Education to open a kindergarten in Syriac was rejected and they brought the issue to trial.

After Ankara's 3rd Administrative Court's decision on allowing Syriacs to open a kindergarten in Istanbul, contrary to official procedure, the Turkish National Education Ministry did not go for an appeal. Syriacs had officially applied to Mardin's Provincial Directorate for National Education on Sept. 25, 2013 to open a Syriac elementary school in Midyat.

The Syriac community had undergone hardships in the early days of the Republic by not being acknowledged as a 'minority', which consequently deprived them of the rights reserved in the Treaty of Lausanne, which resulted in closing their educational institutions in 1928.