Feb. 28: A military coup never to be forgotten 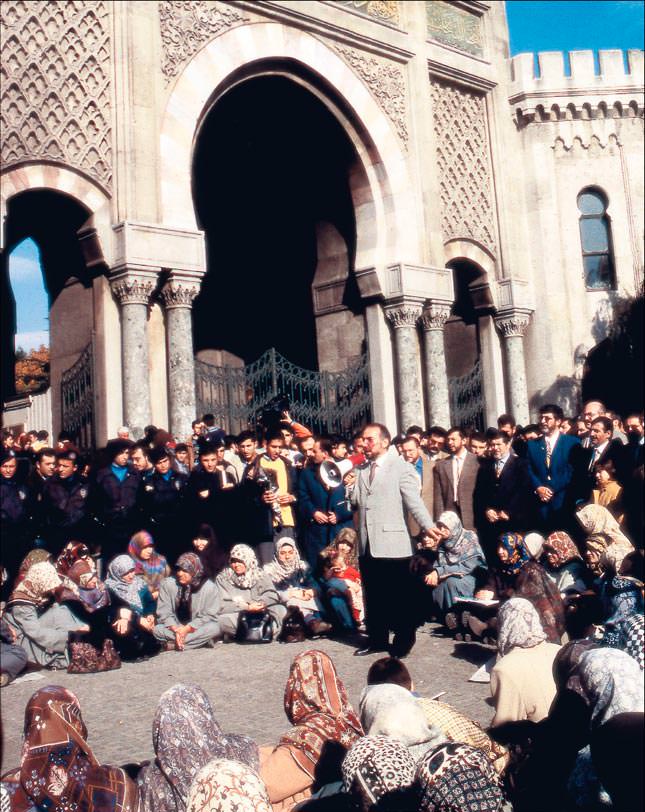 On Feb. 28, the army and media came together to overthrow the legitimate government. Turkey spent many years recovering from the political and economic impacts of the coup

A military memorandum issued on Feb. 28, 1997 started a process where an elected government was toppled, hundreds of thousands of young women's right to education was violated and democracy was suspended for all but a few.

"Fears came true" in December 1995. Although it did not deliver an overall majority, the Welfare Party (RP) won the general election with 21 percent of votes.

In November 1996, the protest against the Susurluk scandal, which revealed close relationships between the government, police and organized crime, turned into anti-RP and pro-armed forces demonstrations. On Dec. 29, 1996, the "Fadime Sahin incident" occurred, during which a religious figure and a hijabi woman who were not married to one another were caught on tape at home together. Similar incidents released on TV channels and newspapers were organized to create a basis for the coup.

On Jan. 11, 1997, Erbakan hosted sufi leaders for an iftar meal - to break fast - at the prime minister's residence, raising some eyebrows. On Jan. 31, 1997, "Al-Quds night" was organized in the Sincan municipality of Ankara against Israeli human rights violations. The participation of Reza Bagheri, the ambassador of Iran, and the play "Cihad" that was staged that night drew a sharp reaction, including tanks moving into the streets of Sincan. This intervention was later described by Çevik Bir, the 1st Army Commander, as "a balance adjustment" to democracy.

On Feb. 28, 1997, the military leadership "rigorously" emphasized that "secularism is the assurance of democracy and law in Turkey" and forced the government to sign the decisions, including eightyear compulsory education and shutting down many religious schools. Eventually Erbakan was forced to step down on June 18, 1997. RP was closed by the Constitutional Court of Turkey in 1998 for violating the constitution's separation of religion and state clause.

Political side of the coup

The Feb. 28 coup dragged Turkey into a particularly volatile situation 17 years ago when the Turkish Armed Forces (TSK) issued a memorandum and forced the legitimate coalition government led by the nowdefunct RP to step down. Democracy and the rule of law were also suspended due to the military intervention.

A series of harsh restrictions were imposed on religious life. The wearing of hijab at public institutions and universities was banned, religious organizations established with a focus on teaching the Quran were shut down. Those bans on religious life caused tumult in the country and saw conservatives purged from politics and government agencies.

Merve Kavakçı, a hijabi politician, was elected as an Istanbul deputy for the Virtue Party (FP) in 1999. However, she was debarred from taking her oath in Parliament merely because she was wearing hijab. As the military increased its pressure on conservative citizens,- the Turkish Supreme Military Council (YAS) blacklisted some religious military officials and discharged them from the Turkish army.

The driving forces in the military and judiciary that staged the coup adversely affected Turkey's education system by introducing more stringent standards to keep students at imam-hatip schools, vocational schools - established to train state assigned imams - out of the higher education scene, preventing them from attending university.

The crisis which prevailed in the country during the coup brought political instability with it. While the Kurdistan Workers' Party (PKK) took up arms against the Turkish government in 1984 to carve out a separate state in the southeast, the coup period was the only time that the PKK did not purport "black propaganda" against the Turkish state and target the Turkish government.
Critics asserted that the military held talks and compromised with the PKK for three years after the coup.

Economic side of the coup

The coup also had an effect on the economic situation of the country. The rise of corruption in state institutions as well as banks resulted in massive economic destabilization.

Pro-RP businessmen were blacklisted and prevented from making investments and bidding for projects. Several companies belonging to anti-coup businessmen went bankrupt due to the pressure. In the years following the coup, the new government was unable to handle the economic collapse and Turkey went through a crisis, in which the Turkish lira devaluated significantly. As a result of the devaluation of the lira, importation nearly came to complete halt.

Turkish media outlets played a prominent role in paving the way for the Feb. 28 coup by incessantly provoking and misinforming the public through the use of systematically organized black propaganda to create an atmosphere of fear. TV channels and newspapers promoted and incited hatred towards the religious in efforts to discredit the Refahyol coalition government headed by the conservative Welfare (RP) and the liberal True Path (DYP) parties in an attempt to overthrow the democratically elected government.

The media was a pioneer in violating a number of principles of justice, namely encouraging the violation of presumption of innocent until proven guilty, attacks on personal privacy and consistent publication of fabricated conservatives.

An example of this is when those arrested in a number of operations were intentionally presented to the country as guilty culprits without listening to their testimony and receiving a trial. Members of the press were unlawfully given access to broadcast the operations and incited hatred towards victims through slander and libel. The unfounded news was accepted as criminal complaint by courts, resulting in the arrest of a significant number of innocent people and placing some media outlets above the police, judges and prosecutors. "Our 70-year-old secular image is diminishing!" "Double faces of the Welfare Party" and "Infiltration of Military Academies by the Welfare Party" were two of the headlines that aimed to drag the government and their supporters through the mud.

Prior to the coup and the period immediately after, the Gülen Movement took a problematically supportive stance toward those who attempted to topple the government and openly abandoned the Islamic principles they claimed to abide by.

The movement's leader, controversial imam Gülen, made a number of statements and claimed the military was attempting to resolve the issue democratically and harshly criticized Necmettin Erbakan, the prime minister at the time. "The military is using their constitutional authority," said Gülen in an interview with TV channel Kanal D on April 16, 1997. He did not hesitate to urge Erbakan to step down as he claimed the prime minister did not manage to succeed. Gülenist newspaper Zaman also took a pro-coup stance and claimed the coup sped up the democratic process in Turkey.

After the Feb. 28 coup, the headline of Zaman newspaper, closely linked to Gülen movement, was "Congratulations!"

It's headlines celebrated and sang praise for the Feb. 28 coup and the newly formed government. This raised doubts about the movement's true agenda as they chose to side with the oppressors who not only attempted to degrade and discredit Turkey's democratically elected government, but also oust supporters who demanded their personal rights and the main tenets of democracy be restored. Critics compare and criticize the movement's current anti-government stance towards the democratically elected government of Turkey following the Dec. 17 operations to their pro-coup attitude during the Feb. 28 coup.


ZÜBEYDE GÜNEN:
Speaking to Daily Sabah, a hijabi (Muslim woman who wears the headscarf as part of her Islamic practices) victim of the Feb. 28 coup, Zübeyde Günen, said, "I was described as an organization member due to my hijab. I was a teacher at a state school.
The school administrators called me one night and asked me to write a testimony. The next day I was informed that they removed me from my post without waiting for my statement."

Referring to a statement by the founder of the Gülen Movement, controversial imam Fethullah Gülen to his female followers to stop wearing the hijab due to the pressure during the coup years, Günen said numerous hijabi women removed their hijab and the pro-coup supporters accused Günen of resisting to wear a hijab as a political symbol. She further noted that those who told the women to stop wearing hijabs committed a sin.

İBRAHIM KELEŞ:
İbrahim Keleş, a military official discharged from the army during the coup years, said he and his family were expelled from the Turkish Armed Forces (TSK) due to his hijabi wife. "I was a military official and my wife was a school teacher. In 1994, my superiors asked me to give my family's photos to check whether we had a religious lifestyle, then they exiled me to the southeast of Turkey in 1995. In this region, my superiors forced me to convince my wife to stop wearing her hijab, but I refused to do so."

Stating that all military officials having a religious lifestyle were blacklisted and discharged, he asserted that the superiors further blacklisted those of us who were attending the Friday prayer. Referring to the hands sealing Turkey's fate by staging the coup, he said his own superiors implied to him that they were not involved in his removal.

SERAP ÇAM DEMIRSOY:
In response to questions by Daily Sabah journalist, Serap Çam Demirsoy, a university student during the coup, said she experienced the "persuasion rooms," which were setup in an attempt to pressure hijabi women to remove their headscarves. "I was only 17 and Türkan Saylan, an academic and founder of the "Association for the Support of Contemporary Living" in Turkey, tried to change my religious way of life in a persuasion room," said Demirsoy.

She further alleged that a nationalist boy attacked and cut the head of a leftwing supporter at a university campus during that time. "While the nationalist attacker had no issues entering the exams and lectures under the supervision of the gendarmerie, hijabi women couldn't because the hijab ban at the university barred them from doing so," she added.

S. E.:
S.E., a doctor at Cerrahpasa Hospital, who prefers to remain anonymous, told Daily Sabah, "I passed the Specialization on Medical Education Exam (TUS) in 1996 and was assigned as an assistant doctor at the Istanbul-based Cerrahpasa Medical Faculty. "After a month in my position, the dean of the faculty, Kemal Alemdaroglu, who was jailed for being part of an organization aiming to overthrow the government in 2008, prevented me from doing my job since I was wearing the hijab and he assigned me to be a faculty's museum staff. Yet the place was not like a museum, more like a warehouse. Alemdaroglu told me that I was not able to treat patients and would be fired when my contract expired. This was a direct intervention to my gained right. Yet nobody supported me during the process."

NUR SERTER:
When asking Nur Serter, "mastermind" of the "persuasion rooms" in Turkey, for her opinion as a Turkish lawmaker, her secretary stated that she was not available to give comments due to her busy schedule.

However, in November 2013, during her speech at the Turkish Parliament, she said, "What I had done was totally right. If I had the chance to do it again, I would. It was thanks to the persuasion rooms that numerous hijabi students decided to remove their hijab and gained the right to attend university."