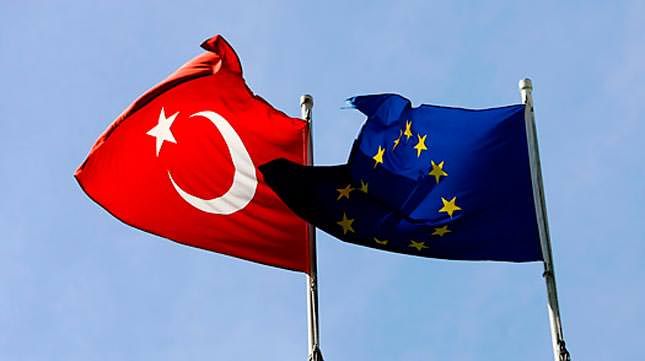 Despite sporadic statements made by certain European politicians, there are no plans to suspend membership negotiations with Turkey, say EU officials

The European Union (EU) is not planning to suspend accession negotiations with Turkey this fall, said an EU spokesperson in an online interview with Daily Sabah. Peter Stano, spokesperson to EU Commissioner Štefan Füle, said that the suspension of talks was currently not on the agenda despite some concerns with regard to recent developments in Turkey.

The statement contradicted comments made by U.K. Liberal Member of the European Parliament Andrew Duff, who was quoted in The Times last Tuesday as saying that the suspension of the talks was almost certain. "You cannot determine the state of negotiations merely by looking at certain statements of politicians," said Idris Kardas, general coordinator of Bilgi University's Platform for Global Challenges.

"We should only consider official statements from the European Parliament and the European Commission regarding EU-Turkish relations. Only then do they have true meaning."U.K. Minister for European Union also voiced his support for the continuation of the negotiations and said his country remains a very strong supporter of Turkey's EU process. Lidington stated that the U.K. is pleased to see the EU Commission's initiatives to establish some benchmarks and key dossiers on Turkey's EU bid. He stressed that it is important to open the energy chapter in early discussions. "We want to see that process move forward," said Lidington, in a visit he made to Turkey's EU Minister Mevlut Çavuşoğlu in Ankara on Wednesday.

The relationship between the EU and Turkey has been strained since new laws on the judiciary and regulation of the Internet were passed. Sources close to the ruling AK Party government defended these moves as an attempt to curb Gülenist plots against government, which are aiming to portray Erdoğan as a corrupt leader who has deep ties with terrorist groups such as al-Qaeda.

It is believed that Fethullah Gülen, a cleric based in the U.S. state of Pennsylvania, has many ardent followers in the judiciary and police forces that are using their power to undermine the government before crucial local elections in March. Erdoğan himself visited Brussels last January and told his counterparts that the Gülen Movement had established a parallel state within the state. "I told them the truth. They were uncomfortable with what the parallel state did," he said. Meanwhile the parliament has been passing laws on the abolishment of specially authorized courts, shorter period of detention, restricting lawful interception and more rights for defence lawyers which were also a requirement of the EU from Turkey for the accession process.

Kardaş said that Erdoğan's visit to Brussel was a successful one and more crucial reforms on the way. "Turkey- EU relations have been living their best days for four years. Erdoğan's visit to Brussels and Germany are crucial developments. The opening of chapter 22 after a four year blockage by right-wing European politicians and obtaining Germany and France's support to open chapters 23 and 24 are Turkey's pivotal achievements [on the road to the EU]. The recent appointment of Stefano Manservisi as EU Ambassador to Turkey also is a good sign of progress. He carried out an important role in the negotiations of readmission and visa liberalization agreements between two parties," he added.

Stano said that Prime Minister Erdoğan's visit provided the opportunity to underline Turkey's strategic importance for the EU. "The EU should remain the anchor for reforms in Turkey, especially in the areas of rule of law and fundamental rights and freedoms."