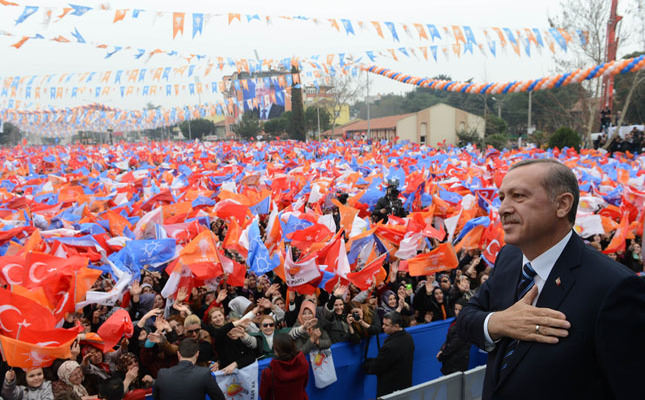 In his speech, Erdoğan took aim at the Gülen movement over its wiretapping of thousands of citizens and for targeting "Turkey's national will."

Turkey has been shaken since the Dec. 17 operation, aimed at undermining the elected AK Party government. The escalating fray, which started with the move to shut down prep-schools, mostly run by the Gülen movement, has continued to play out between the controversial imam Fethullah Gülen and Erdogan.

As part of his election campaign in western Turkey, Prime Minister Recep Tayyip Erdoğan held rallies in the province of Balıkesir on Friday.
During his speech, Erdoğan took aim at the Gülen Movement over its wiretapping of thousands of citizens and for targeting "Turkey's national will."

Turkey has been shaken since the Dec. 17 operation, aimed to undermining the popularly elected AK Party government. The escalating fray, which started with the government's move to shut down prepschools, mostly run by the Gülen Movement, has continued to play out between the controversial imam of the movement Fethullah Gülen and Prime Minister Erdoğan.

After the actions of the Gülen Movement were detailed to the public, specifically the tapping of nearly 7,000 businessmen and political figures' phones, an allegedly fabricated recording of Erdoğan and his son, Bilal Erdoğan, was leaked to the social media on Monday, in an apparent retaliatory move by Gülenist supporters. In the recordings, which AK Party leaders have insisted are fabricated, both discussed ways of getting rid of large amounts of cash from their home.

While stressing the importance of the upcoming elections, Erdoğan denounced the movement, which infiltrated the police and judiciary, as a threat to Turkey's national security.

Erdoğan also reached out to the controversial imam Fethullah Gülen, urging him to come back to Turkey. "If you want to be a political figure, come back to Turkey. He sent his religious books and recited praises for me from Pennsylvania. I have always thought that he was sincere, but now I figure out that he is not," said the prime minister, vowing to purge Gülen's illegal network within the state.

Erdoğan also accused Gülen of running away from Turkey, saying he is trying to unsettle the entire country and threaten Turkey's national security from his home in the United States and echoed the government sentiments that they would fight against any move aimed to threat Turkey's security.

Erdoğan said, "This illegal organization is involved in a complete betrayal. They are vile enough to grab the most strategic, confidential information of their own country and then leak them to the media outlets."

He then called on the sincere followers of the controversial imam and asked them to ponder the movement's actions.
Showing the plan to shut down the prepschools as being the reason behind the rift between the movement and government, Erdoğan said the movement possessed billions of dollars from those prep-schools.

He harshly criticized the main opposition Republican People's Party (CHP) and Nationalist Movement Party (MHP) leaders, Kemal Kılıçdaroğlu and Devlet Bahçeli, of serving as a bit player in the illegal actions staged by the Gülen Movement. "Their imam, residing in Pennsylvania, lets its followers stage fabricated recordings, and CHP and MHP support that vilest attack of the movement in Turkey's history," said the prime minister.

He touched on the steps taken by AK Party to remove any illegal organizations threatening the nation and noted that they have fought threats against the democracy and national will, and they would continue to do so as long as they are the ruling party.