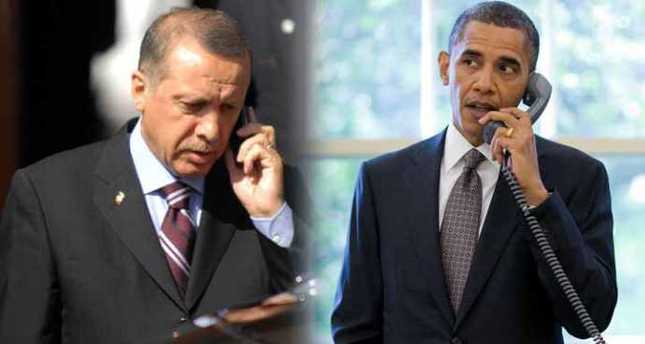 by Mar 01, 2014 12:00 am
Sources in the Turkish Prime Minister's office told Daily Sabah that Prime Minister Recep Tayyip Erdoğan has voiced his disappointment with Israeli counterpart Benjamin Netanyahu's reluctance over an ongoing reconciliation process during a telephone conversation with U.S. President Barack Obama.

The process began with an official Israeli apology to Turkey last year after Israeli soldiers killed nine Turkish nationals during an attack on the Mavi Marmara flotilla carrying humanitarian aid to Palestine's blockaded Gaza Strip in 2010.

Turkey had three conditions for reconciliation: an official apology, compensation for the victims' families and lifting the blockade on Gaza.
Israel has yet to fulfill the last two conditions.

The talks continued on the matter of compensation but Israel does not seem to be eager to solve the problem, according to Daily Sabah's sources. At the start of negotiations, the Gaza blockade was not on the agenda but was being dealt with on a parallel track that was making progress.

Despite Turkey's efforts to find a solution, Netanyahu does not appear to be making the same effort since his cabinethave maintained a largely negative stance toward Turkey and according to many analysts will do all it can to not surrender to Turkey's demands entirely.