Davutoğlu calls for peace in Crimea 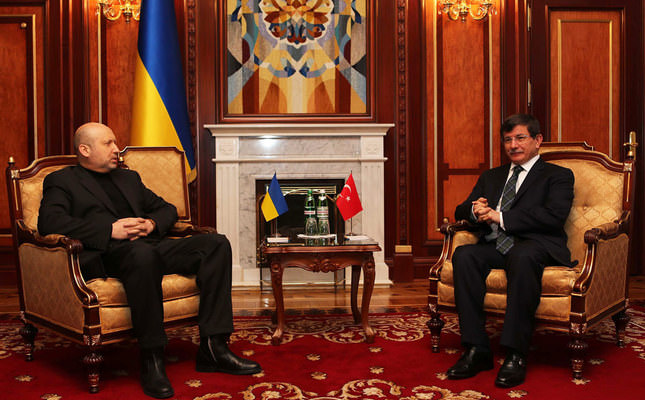 As tensions rise in Ukraine, Turkey says peace is essential for the region

Kiev (AA) -Turkey's Foreign Minister Ahmet Davutoğlu said Turkey is ready to step up and diffuse the tension in Crimea.
Davutoğlu met interim President Oleksandr Turchynov, in Ukraine on Saturday, along with Ukraine's Prime Minister Arseny Yatsenyuk.
Davutoğlu urged international platforms, such as the United Nations and the European Council, to take responsibility to ease the tension in Crimea.
Davutoğlu stressed the importance of Ukraine's territorial integrity, and the continuation of dialogue. "All of the problems in Crimea must be solved under the territorial unity of Ukraine. Crimea plays the role of a bridge between Ukraine and Turkey; the peace in Crimea will be essential for the entire geography," he added.
He says all the religious and ethnic groups in Crimea are going through tough times and everyone must work together to keep Crimea as a land of peace.
Ukraine's acting Foreign Minister Andrey Deshitsa said they will develop the relations between Turkey and Ukraine. "Unfortunately, Crimea is not stable at the moment, and tensions are increasing, we are hoping to find a solution," he said.
Meanwhile, president of the European Commission, Jose Manuel Barroso, expressed his concerns on his visit to Germany on Saturday, saying the situation in Crimea is not acceptable in the Europe of the 21st century.
Turchynov said it is against Ukraine's constitution to appoint Sergey Aksenov as the prime minister of Crimea.
Aksenov issued a press release on Saturday in which he claimed the police and army are under his control. He also noted that he asked Russia's President Vladimir Putin to step up for peace in Crimea.
Pro-Russian Aksenov was appointed on Feb. 27 as the leader of the Autonomous Republic of the Crimean parliament, backed by the majority of lawmakers.