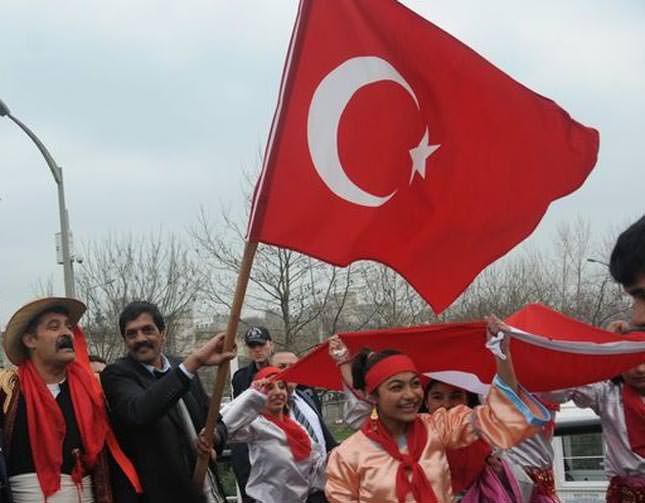 Turkey is preparing to enhance and speed up social support for Romani people in an effort to integrate, educate and empower them

Turkey's Ministry of Family and Social Policies has set aside a generous budget of TL 31.5 million for social support projects geared towards Turkey's Romani people between 2014-2016.

In 2014, the government will be spending nearly 4 million for the Romani expansion project, which will be conducted in collaboration with the Ministry of Family and Social Policies, Ministry of Education, Ministry of Labour and Social Security, Interior Ministry, Ministry of Environment and Urban Planning and Ministry of Health.

The EU-initiated project for "Enhancing social inclusion in areas densely populated with Romani people" is planned for 12 cities. The Strategic Country Report on social policies oriented towards Romani people will also be concluded by the end of 2014.

According to Ali Daylam, the delegate of Turkish Romani People, in the European Council's statement to AA, the Romani people have been yearning for such a project for years. "We are an element of this country; one of the building blocks and are all on the same boat: Turkey means everything to us," expressed Daylam in 2013 when the democratization package was initially announced. Many Romani individuals like Daylam believe that the initatives will eliminate prejudice towards Romani people in Turkey and bring equality.

As part of the democratization package introduced by the AK Party government, the project mainly aims to address social and economic issues of Romani people such as employment, sheltering and education. To provide sheltering in line with the lifestyle and practices of the nomadic ethnic group, the government will continue to implement social housing projects in cooperation with the Housing Development Administration of Turkey (TOKI) in Edirne, Çanakkale, Sakarya, Bursa and other cities throughout Turkey. Social Support Centres will also be established in areas densely populated with Romanis to provide assistance.

The "Cennet Mahallesi" Project conducted in cooperation with the Municipality of Urla and Izmir Institute of High Technology sets a prominent example within Turkey and in Europe as noted by Hacer Foggo, the superintendent of European Roman Rights in Turkey. The project is greatly praised by officials due to the fact that it allowed locals to sit down with municipal officials and express their demands and describe the atmosphere that they wish to live in.

More importantly, the project aims to provide employment opportunities for the Romani population who cannot make ends meet through the collection of junk, selling flowers and unskilled labor. "They are extremely enthusiastic about the project" says Foggo, who believes that it is a project that will make the Romani people's dreams come true.

Such projects are of crucial value as they will allow Romani children to expand their horizons and encourage them to educate themselves and have proper jobs in the future. The Romani Language and Cultural Institution will be conducting research about everyday issues that are faced by Romani people and will aim to resolve and eliminate these issues.

Romani people continue to remain a marginalized group in various countries throughout the world. They have faced and continue to face discrimination, persecution and alienation for their unique lifestyle and cultural practices. For instance, in Hungary, Romani children are sent to the same schools as children with mental disabilities while in the Czech Republic, Romani women are forcefully sterilized. In Turkey, such radical state imposed policies were never the case, they have faced societal discrimination in employment, sheltering and educational spheres, which make up the main focus of attention in Turkey's Romani expansion project, greatly welcomed and supported by the minority.