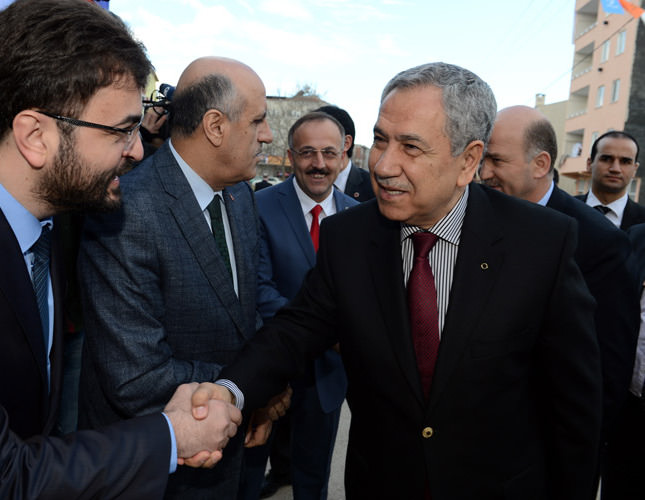 by Mar 04, 2014 12:00 am
Bursa (AA) - Turkey's Deputy Prime Minister Bülent Arınç defended his government's reforms in the judiciary and police since December 17, declaring that nonaction could result in the collapse of Turkey. During his appearance in the Turkish private broadcaster CNN Turk on Sunday night, Arinc addressed a wide array of hot topics including the developments in the aftermath of the Dec. 17 anti-graft operation, the closure of private tutoring centers and the length of pre-trial detentions. If nothing had been done in the Supreme Board of Judges and Prosecutors (HSYK) and in the police department [after Dec. 17], Turkey would have found itself in chaos today,"
Arinc said.

An Istanbul-based anti-graft operation launched on December 17, 2013, in Turkey caused controversy after it led to high-profile arrests. The Turkish government called the probe a "dirtyplot"against it, constructed by a "parallel state within the state" that it said was nestled within the judiciary and police. The government retaliated againstthe "plot" by restructuring the country's top judicial board HSYK and demoting a number of police chiefs and prosecutors, who it considers are affiliated with the "parallel state.

If the plot had attained its goals, it would lead to the collapse of not only the government but also Turkey altogether," Arınç said.
One of the most senior voices in the Turkish cabinet, Arınç said the government's decision to close down the private tutoring centers, widely known as 'dershanes' is a "political choice" and time will show if it is a right or wrong decision. "If we are wrong, we will bear the consequences; butif we are right, the youth will win," he said. The Turkish government announced plans last November to eradicate the dershanes, a substantial number of which are run by a movement headed by Fethullah Gülen, an Islamic preacher living in self-imposed exile in the U.S. state of Pennsylvania.

The announcement of the plan triggered a conflict between the government and Gülen, whose followers have been accused by the government of infiltrating key state institutions and of forming an illegal "parallel state" which conducted the Dec.17 operation. Arınç scorned the alleged threats by the Gülen followers for leaking Prime Minister Erdogan's wiretapped phone calls, saying, "Mr. Prime Minister is a brave man, he had already said to them 'Do your worst'." Arınç also responded to the criticism that businessman Reza Zarrab, who was detained as part of the Dec. 17 operation, was released within a short time although the Ergenekon and Sledgehammer coup case detainees stayed in custody for years. He said he had always been critical ofholding detainees for lengthy and indefinite periods inpretrial detention. "[Zarrab's release] hurt people's conscience. I am not saying "Let him stay in jail, but I would like to see to what extent this businessman affected the treasury," Arınç said.