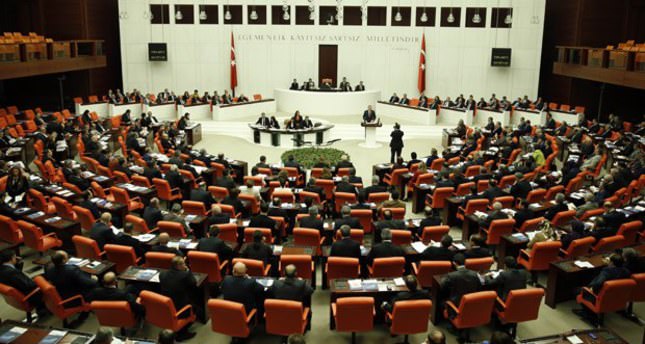 Ahead of upcoming elections on March 30, the Parliament passed laws expanding the rights of all Turkish citizens, a move which could energize efforts to improve relations between Ankara and the Kurds

The Turkish Parliament recently approved a law known as the "democratization package," which aims to better protect individual rights and freedoms.

This is the last major piece of legislation the Parliament approved before it closed on Sunday ahead of local elections. The bill is now awaiting ratification by President Abdullah Gül. Passed by lawmakers early Sunday, the package allows for education in private schools and political campaigning to be conducted in languages other than Turkish. It also allows former non-Turkish names of villages and neighborhoods to be reinstated.

The new law states that Turkish citizens can open private institutions to provide education in languages and dialects they traditionally use in their daily lives, on the condition that the schools are subject to provisions in the Private Educational Institutions Act and are inspected by the Ministry of National Education.

On hate crimes, the package stipulates that hate speech or acts related to language, race, nationality, color, gender, disability, political opinion, philosophical belief, religion or sectarian differences will be punished by up to three years in prison. Furthermore, the state will provide financial aid to political parties that receive more than 3 percent of the total number of votes in the parliamentary general elections and the respective aid will be no less than TL 1 million.

Praising the government's move to uphold democracy, Kurdish-Turkish intellectual and columnist Muhsin Kızılkaya said, "AK Party is trying its best to perform within its own limitations as a conservative party."

Kızılkaya said many of the new rules were already practiced among Kurds, but there are still some cases pending against Kurdish politicians for greeting people in the Kurdish language during election campaigns. The new law will see those cases thrown out.

"Kurdish political figures may not be satisfied with what the democratization package contains, but we cannot expect the AK Party to respond to their needs, as the ruling party has its own agenda. Plus, conservative Kurds in Turkey are happy with what the AK Party offers them," added Kızılkaya.

Turkish sociologist and AK Party Deputy Chairman Yasin Aktay said the AK Party is trying to find middle ground and respect the values of all sides. "The [democratization] package was the best [solution] to the [problems] that citizens faced in Turkey. Society is quite dynamic and necessities may often change, in fact we might find some of the changes unnecessary. The AK Party is not changing against the will of the people."

In addition to new legislation, efforts to further the reconciliation process with the Kurds appear to have taken another step forward. Peace and Democracy Party (BDP) Group Deputy Chairman İdris Baluken held talks with the Kurdish Communities Union (KCK), an illegal administration of the Kurdistan Workers' Party (PKK), on Feb. 28.

It was asserted that during the talks, the KCK gave Baluken a letter to be delivered to PKK leader Abdullah Öcalan, who has been serving a life sentence since 1999. Baluken, who is responsible for establishing contacts between the KCK, PKK and Turkish government, allegedly forwarded the KCK's letter to Justice Minister Bekir Bozdağ on Sunday, but Bozdağ denied those claims and said, "The Justice Ministry has no such authority."

Ahead of the local elections on March 30, Diyarbakır Independent Deputy Leyla Zana, who was the first Kurdish female lawmaker to win a seat in the Turkish Parliament in 1991 - and imprisoned after taking her parliamentary oath in Kurdish - is expected to visit Öcalan on the weekend.

Regarding a letter to be delivered to Öcalan, Baluken said the talks, scheduled to be held in İmralı, the maximum security prison where Öcalan is currently serving his sentence, are of utmost importance.

Baluken said, "All the democratic powers in Turkey should take the initiative. Finding an alternative by organizing effective democratic moves is a historic responsibility since this process is too significant to leave it to the hegemony of the parties that will come to power."
He criticized the government, saying the AK Party took too long to pursue the reconciliation process between Ankara and the Kurds.

Fırat News Agency reported that PKK leader Abdullah Öcalan's brother Mehmet Öcalan, visited the imprisoned PKK leader. Mehmet Öcalan said his brother made statements on the upcoming local elections and reconciliation process between Turkey and the Kurds.
Abdullah Öcalan said, "The first step in the process has been completed, but the background should be prepared to move to the second step. " He further asserted that no governmental official has contacted him in 20 days.