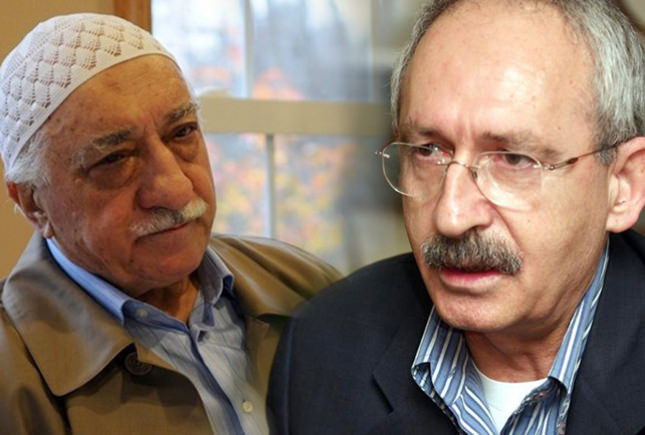 Perceived cooperation between the Gülen Movement and the CHP raises eyebrows, with many party members admonishing the leadership for its deal

Ayman observed at a public event in her home district of İzmir. The outspoken politician also argued that the Gülenist network seeks to impose their rules on Turkish politics, and warned, "We should not allow them to exert control over people through blackmail and illegal eavesdropping." Musa Gökbel, a former parliamentarian from Muğla, supported Güler's remarks by claiming, "The Republican People's Party is on the road to become the Gülenist People's Party."

The anti-Gülenist sentiment, however, seems not to be limited to CHP politicians. According to Şener, a leftist journalist who spent over a year in the Silivri correctional facility as a suspect in the Ergenekon coup trial, argued in a live interview with the CNN Türk news channel that there was close cooperation between the CHP and the Gülenist network. He pointed out, "The CHP leadership says they need the movement's vote, while they should be ashamed of Mustafa Balbay and İlhan Cihaner," CHP parliamentarians who found themselves at odds with Gülenist operatives in the past.

Balbay, chief political correspondent for the Cumhuriyet daily, was arrested in March 2009 as an Ergenekon suspect only to be released nearly five years later in December 2013. During his time in prison, Balbay was elected to Parliament and became a leading public figure against the Gülenist network's judicial witch-hunt. Cihaner, a former prosecutor with leftist leanings, was also arrested in February 2010 for his alleged involvement in the Ergenekon terrorist organization. He was released from prison after six months to run a successful campaign for Parliament.

Journalist Şener also experienced the wrath of movement-affiliated prosecutors for authoring a 2009 book in which he alleged that Gülenist law enforcement agents played a major role in the assassination of Armenian-Turkish journalist Hrant Dink in 2007. Şener claimed that he was arrested by the same group that carried out the Ergenekon investigations.

Despite the CHP leadership's alleged interest in maintaining closer ties with the Gülen Movement, some believe that such plans would have minimal effect on the party's electoral support. Savcı Sayan, an advisor to former CHP Chairman Deniz Baykal, argued that the party's voter base and the Gülenists could not possibly warm up to each other. Ertan Aydın, an advisor to Prime Minister Recep Tayyip Erdoğan with a strong background in electoral behavior, similarly noted that the most precious asset that the Gülen Movement could offer to the main opposition would be to trigger extraordinary political circumstances to influence voters with little or no interest in elections.
With Turkey's local elections less than a month away, it remains to be seen how effective the CHP-Gülenist alliance will prove to be in the face of a growing wave of criticism directed at both groups.