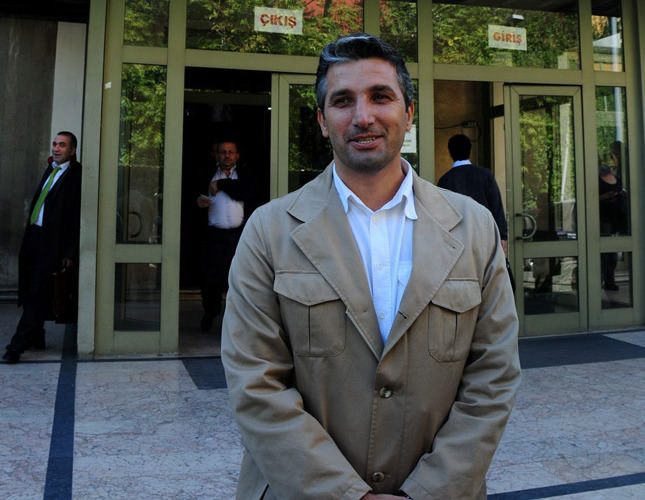 It took only one book about Gülenist infiltration of the police force to be jailed, says journalist Nedim Şener

A well-known investigative journalist claims that the Gülen Movement has jailed its critics in the past using coordinated media attacks and fabricated evidence.

Nedim Şener, an awardwinning columnist at the daily Posta, who is known for reporting on corruption cases and the murder of Armenian-Turkish journalist Hrant Dink, told Daily Sabah that he was targeted by the Gülen Movement in the past few years after writing a book about Gülenist police officers' misconduct in Hrant Dink's murder.

"I have written many books detailing corruption allegations against Prime Minister Recep Tayyip Erdoğan and his former Minister of Finance Kemal Unakıtan. I never felt that I would end up in jail. When I started to work on Gülenist police officers, [things] clearly changed," he added.

Şener believes that Fethullah Gülen, the controversial imam is commanding a network of police officers within the state and using them to further his political ambitions.

Şener documented the connections of top police officers to the Gülen Movement in his books titled, "The Dink Murder and Intelligence Lies" (2009) and "Red Friday" (2011). The top police officers in question include Ali Fuat Yılmazer, who was head of the police intelligence unit and Ramazan Akyürek, head of the Trabzon Security Directorate, who shouldered the responsibility of Dink's murder in 2007, which was committed by Ogün Samast, a resident of Trabzon.

Şener's accusations put him under the spotlight and led to what he described as a plot against him. For over one year he was kept in pretrial detention and freed in March 2012, but he is still facing a 15-year sentence pending the outcome of his trial.

He said, "These police officers had a case against me seeking a 32-and-a-half year sentence but I was acquitted. Then they accused me of plotting an assassination against Prime Minister Recep Tayyip Erdoğan's son. I was wiretapped as well. Finally they put me in jail for more than 375 days for being a member of a deep state organization called Ergenekon."

Şener thinks that Gülenist police officers had overlooked Dink's murder in order to legitimize the Ergenekon investigation that was targeting top army generals, former bureaucrats and local organized crime figures who were accused of being behind many coup attempts in the past. "It was not surprising to find out that over 3,000 people, including columnists from every background, politicians, and journalists were eavesdropped on by Gülen-affiliated officers, as revealed last week. It is very clear why they did that. They archived every minute detail on everyone to find out what personal problems people are tackling in their private lives, and use the information against them to get what they want."

Şener emphasized that the Gülen Movement is taking aim at Erdoğan by orchestrating a corruption inquiry against the government. "No one can [honestly] say that there is no corruption.

However, this probe clearly has an agenda to topple Erdoğan. They are focusing on Erdoğan himself as they did in the past to people close to him."

In the aftermath of the Dec. 17 operations and other attempts of the movement to destabilize the government, Turkey's main opposition, the Republican People's Party (CHP) has conducted a campaign against Erdoğan and accused him of losing his legitimacy and called on him to resign. Şener finds CHP's sudden support for the corruption inquiry suspicious.

He said, "The Gülen Movement is working very closely with CHP. The Gülenist daily Today's Zaman published a massive photo of Kemal Kılıçdaroğlu on their front page, similar to the one they published of Erdoğan a year ago. CHP says they need Gülenists' votes, but they should also be ashamed of the parliamentarians who were arrested. These people even tried to detain Kemal Kılıçdaroğlu. The people who set up this conspiracy against journalists are the members of the Gülen Movement."

Şener argues that the only solution to this crisis is to increase democratic standards in the judiciary and state. "If Erdoğan's government wants to have a battle with the movement, it must be within the rule of law. [Accused] people should feel that there is concrete evidence against them and the probes must be carried out transparently," he added.