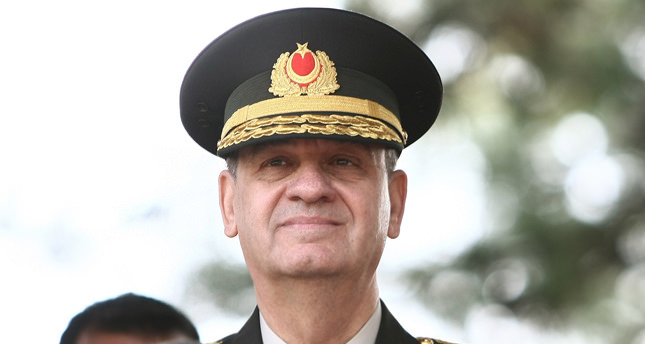 by Nurbanu Kızıl Mar 07, 2014 12:00 am
Turkey's former chief of the General Staff, İlker Başbuğ, who is serving a life sentence at Silivri Prison, made striking remarks about the current state of affairs in Turkey in an exclusive interview organized by Mehmet Barlas and Şaban Arslan from Sabah newspaper.

Başbuğ was convicted on charges of "establishing and leading a terrorist organization" and "attempting to destroy the government" as part of what is known as the Ergenekon trials.

Başbuğ expressed his disapproval of military interventions because "military interventions have only harmed Turkey." From behind bars, the former chief of the general staff explained how various lawsuits have been filed against the Turkish Armed Forces as part of a smear campaign to carry out an extensive purge within the armed forces.

Referring to a speech from April 2009 in which he said religious movements are increasingly gaining strength to shape socio-political life, Başbuğ noted that issues of religion, politics and economy are not new topics and are difficult to avoid due to a lack of a strong bourgeoisie and middle class in Turkey. He noted that he had a number of significant projects for the Turkish Armed Forces but was prevented from carrying them out.

He added that his 2009 speech is especially relevant at this point in Turkey's political state. With regard to the plot, Başbuğ insisted it was organized in such a manipulative way that nobody is able to explain exactly how it all came together. For instance, prosecutor İlhan Cihaner initiated an investigation in 2007 in Erzincan, with the İsmailağa - religious - community at the center of attention and took 26 people into custody, nine of whom were arrested.

The framework of the investigation was expanded when the Gülen Movement came into the picture and merged the case with the incident in Kayseri, where a fake order was written and signed. That case was organized by three sergeants and five civilians, who prepared digital data and placed them in computers at military headquarters. One of the sergeants claimed he was a member of the "Işık evleri" (student housing provided by the Gülen Movement), which resulted in further investigation of the issue, but they were unable to find the five civilians who were involved in the case. Following the incident, a bill was passed to prevent the five civilians from being tried in military courts without seeking the chief of staff 's opinion or informing the minister of defense, resulting in their trial in civilian courts even though they committed crimes in the military.

In the interview, Başbuğ then referred to the incident on April 8, 2009, where a photocopied document titled "Action Plan against Reactionary Forces" was presented to the court as evidence. For Başbuğ, this document was only a piece of paper as it was not the original document. Despite being a photocopy, it was subsequently accepted by prosecutors as evidence.

On the other hand, there were also advice letters written by a military officer, handed by prosecutor Zekeriya Öz to the Institution of Forensic Medicine for investigation. Controversially, the results stated it was a "wet signature" even though there were fingerprints of 14 people on the paper, but no fingerprint of Dursun Çiçek, the person accused of being the owner of the wet signature.
No investigation was conducted, despite insistence on identifying who the 14 people were.

The former chief of staff noted the main goal of this was to extend the plan initiated in Kayseri and merged with Erzincan to a larger area in order to carry out an extensive purge in the Turkish Armed Forces (TSK). One of the reasons for this was for the Supreme Court of App e a l s to take over the case, and the other was due to the fact that ex-army Chief Saldıray Berk did not agree to give a statement, forcing them to take a step back. When the plan did not work, they allegedly came up with the "Internet memorandum case," according to Başbuğ. He claimed he was the one who closed down the irtica.org website, accused of supplying documents for AK Party's closure case, even though there was only one article used from this website for that case.

He also expressed his frustration regarding the instance when he was abroad and commander of the Turkish Land Forces, Işık Koşaner called him to inform him about the investigation that would begin under the scope of the Action Plan against Reactionary Forces Law. But the call was unjustly portrayed as an act of terrorism.

Başbuğ also touched upon the tip from the United States on Dec. 19, 2009 to the exclusive phone of Ankara's Counterterrorism Unit stating that two cars with license plates 06 BE 9712 and 06 LJY 48 may attempt to assassinate Deputy Prime Minister Bülent Arınç. This required a search for evidence of the assassination in the Cosmic Room - a room containing top secret information under the control of Başbuğ. Başbuğ allowed the search upon suggestion by Prime Minister Recep Tayyip Erdoğan.

"They would label me as the assassination instigator if I did not give permission to search the Cosmic Room," said Başbuğ, who stated no evidence was found in the room. He maintains that had he not permitted the search, the incident would have unjustly incriminated the Turkish Armed Forces. Başbuğ maintains that the plot was orchestrated by those who are full of hostility and revenge toward the Turkish Armed Forces through a series of slander campaigns carried out by the parallel structure within the Turkish state.

İlker Başbuğ recently applied to the Supreme Court of Appeals following the rejection of his request to be released. Others such as Mustafa Balbay and Fatih Hilmioğlu, who were accused within the scope of the Ergenekon trial have also appealed their sentences and have been released.