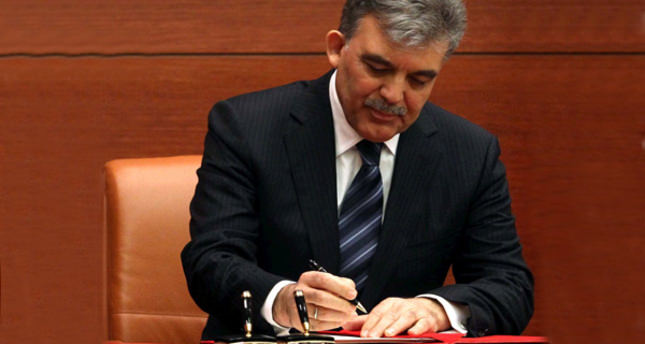 by daily sabah Mar 07, 2014 12:00 am
Istanbul - President Abdullah Gül has signed a bill that will abolish Turkey's Specially Authorized Courts (ÖYM), putting an end to the 41-year-long practice of exclusive trials.

The law is part of what is known as the democratization package, which aims to bring a number of significant changes to the justice system to improve not only its functionality but also guarantee freedoms to Turkish citizens and adherence to the rule of law.

Cases that have been previously tried by ÖYMs will be transferred to high criminal courts and the judges and prosecutors will be re-assigned to appropriate positions within 10 days. One of the most important changes brought by the law will be the reduction of minimum prison sentences of five years.

Another significant change brought about by the new law is that wiretap orders will only be approved through a unanimous vote by the Authorized High Criminal Court, whose membership is selected by the Supreme Board of Judges and Prosecutors (HSYK). Moreover, the total duration that recording devices and wiretaps may be active pursuant to a court order will be reduced to three months and six months for offenses related to organized crime. Regulations related to wiretapping and recordings have also been reformed, as a document or report on the owner and user of the phone line or communication device will be required. Limits have also been put on technical surveillance, whereby decisions will be made through a unanimous vote in the HSYK and will proceed for no longer than three weeks.

The new law will also provide more protection for personal data as those who unlawfully record, distribute and seize such data will be facing a minimum one-year prison sentence.

Concrete evidence will be required for arresting, taking into custody, or confiscating suspects' property. Confiscation of immovable property will be limited as the decision will have to be supported by a report proving it was acquired as part of a criminal investigation. Confiscation of computers or hard disks will also necessitate concrete evidence and at the time of confiscation the accused or their lawyer will be given a copy of the data. Those arrested during the investigation or prior to the commencement of the trial based on the decision of the courts must face trial within 24 hours. In the case that the accused is unable to appear before the judge or if there are no courts where they were arrested, the inquiry will be conducted through the use of an audio-visual communications system.

Another significant feature of the new law is that it repealed the article that criminalized the establishment of an organization to commit crimes from the list of "catalogue crimes."

President Gül has previously said that he is of the opinion that there is no need for Specially Authorized Courts. He has stated that the reforms will enable Turkey to improve its judiciary, a crucial factor for the country during its European Union ascension process.