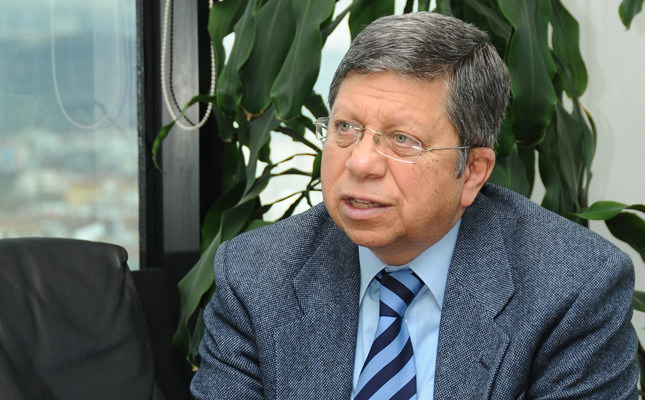 Turkish Daily News (TDN) was the first English newspaper established in Turkey. Created in March 1961, it filled an important void for many years as Turkey's only English-language newspaper. Considering the development of TDN and its success in becoming an important news resource, it is hard to ignore the contribution of Ilnur Çevik, who devoted 31 years to the paper. Daily Sabah interviewed Ilnur Çevik, a senior fellow in journalism. We talked about English-language journalism in Turkey.

Can you describe the process by which Turkish Daily News was established?

My father, Ilhan Çevik, worked as a press attaché in England. Following the military coup in 1960, he returned to Turkey and resigned from the Directorate of Press and Information. My father said Atatürk placed great importance on foreign newspapers, and believed that our country needed to fill that important void. After his return and resignation from the Directorate of Press and Information, my father took an idealist decision to fill the lack of foreign newspapers in Turkey with his own funds. He founded Turkish Daily News on March 15, 1961. At first, the newspaper was published by a team of three people using only one printing machine. In the middle of the 1960s, they moved to a bigger building and bought a bigger printing machine. Following this, the newspaper collaborated with the Associated Press (AP). My father persuaded the AP, and one of its offices was subsequently established in TDN. Their collaboration continued for a long time.

How did you get involved in journalism?

I won a prize in a TÜBITAK competition while studying at TED Ankara College in 1968. Actually, I wanted to become a scientist. After completing a degree in Computer and Management Sciences at the University of Warwick in England in 1973, I returned to Turkey. My father wanted me to work with him and thus my career in journalism began. We had an American editor and a news editor. After I started to work, they quit. While I was learning to write news, I found myself taking responsibility for the whole newspaper, and then spent 31 years in that job. In 1975, we started to publish TDN under Web Ofset. At that time, Web Ofset was considered a big investment, and the main reason to start publishing was to subsidize the English newspaper. It is hard to keep an English newspaper alive in Turkey because advertising revenues are small and circulation is limited. It was necessary to finance TDN through other sources. In the 1980s, old-fashioned printing machines were allowed to be used in Turkey. Although it seemed a positive development, the quality of printing decreased. Therefore, we quit and began publishing a trade registry gazette in the 12 years that followed.

How did you become the editor-inchief at TDN?

From 1973 to 1984, I did everything by myself and learned about journalism. In 1984, I took over the work from my father and became the editor-in-chief. For many years, our newspaper continued to be the only reference source in English. Our motto was "Turkey's first and only English newspaper." The most important reason for our success as the only English newspaper is that we never left the market, and we always focused on objective journalism. There were some other competitors, however they could not stand for a long time. Over the years, our newspaper became an important brand and a foreign reference source in Turkey. TDN also became a reference newspaper which was read and used by the American Congress, the European Parliament, and all the big capitals. This success was a reflection of our power.

Apart from your career as a journalist, what did you do as an advisor to politicians?

I was an advisor to Süleyman Demirel and Necmettin Erbakan. The main reason the politicians requested me as an advisor was because TDN became a very successful and objective newspaper. When Süleyman Demirel was assigned as the President of Turkey, I was his advisor between the years 1991 and 1993. It was not paid position and I continued to work as the editor-in-chief at TDN. At times, I contradicted the government's stance since TDN is an opposition media organ. In 1994, I started to work as the advisor to Necmettin Erbakan. There were people who asked me whether my advisory work contradicted the newspaper's opposition stance. My answer was that I shared what I believed to be right even if they did were not interested in hearing my opinions.

What are the main editorial principles of TDN?

There are two main political principles which define the publishing policy of TDN. The first one was the integrative discourse which focused on the Turkish- Kurdish brotherhood. The second one was to protect the religious sensitivities and rights of the masses. The elimination of discrimination was our main principle.

Do you think that these two opinions are more related with domestic policy? TDN is an English newspaper; is there any contradiction on this issue?

This is entirely true; however TDN became a very different newspaper thanks to the dynamism that emerged from the editorial line, including these two policies. This dynamism enabled us to present real events in Turkey in an objective manner in English. This was what TDN's readers expected.

How did you organize the publishing team?

I trained my own team based on a master-apprenticeship relationship. In addition to Daily Sabah's editor-in-chief, there are two other English newspapers whose editors-in-chief are journalists trained by myself under TDN. There are also many journalists who worked at TDN. All these journalists had varying opinions; this did not create a problem, but rather enriched the newspaper.

Can you describe the process in which TDN was sold to Dogan Media Group? And how did you leave TDN?

As TDN, we harshly criticized the military during the Feb. 28 coup. We drew serious attention. After a long period of time, there were military generals who were uncomfortable with our editorial line and attempted to ruin TDN. Indeed, the chief accountant of TDN was a military man. We discovered his true identity when the Ergenekon trials began. In three months, they stole $12 million. Our stolen cheques and bonds were released to the public. This case led to such a big financial crisis that we had to collaborate with Dogan Media Group. After a while, we understood that Dogan's move was also preplanned. In 2004, we were all dismissed from the newspaper. The TDN label was associated with the name Çevik. Therefore, in order to eliminate the Çevik name, they ruined TDN which was an established label. At that time, we were called by the Police Intelligence Agency, which said that Aydın Dogan ordered Sener Eruygur and Aytaç Yalman to dismiss us. Aydın Dogan also removed my father's name — Ilhan Çevik — from the newspaper's copyright page. However, Sedat Simavi, the founder of Hürriyet is still referred to on the copyright page, and I think his name should be seen there. After TDN, I published another newspaper called The New Anatolian. However, I had some financial problems and the paper was only published for a year and a half.


What do you think of the newly published Daily Sabah newspaper?

Unfortunately, the other two English newspapers [in Turkey] do not have an objective approach to journalism. At this point, Daily Sabah has filled an important void in terms of English-language journalism in Turkey. I would like to note that the layout and design of the newspaper are rather successful. I also think the newspaper's columnists are sufficient. It will take time for the newspaper to have a distinct style by publishing unique news. I hope Daily Sabah will accomplish this in a short period of time.


İlnur Çevik was born in Ankara on June 27, 1954. Following his primary school education in London, he completed his secondary education at TED Ankara College. While studying there in 1968, he won second place in a TÜBITAK competition. Çevik received a Computer and Management Science degree from the University of Warwick, England in 1973. He began working at Turkish Daily News in the same year. In 1984, he became the editor-in-chief and held the position until 2004. He was also an advisor to former president Süleyman Demirel and former Prime Minister Necmettin Erbakan.