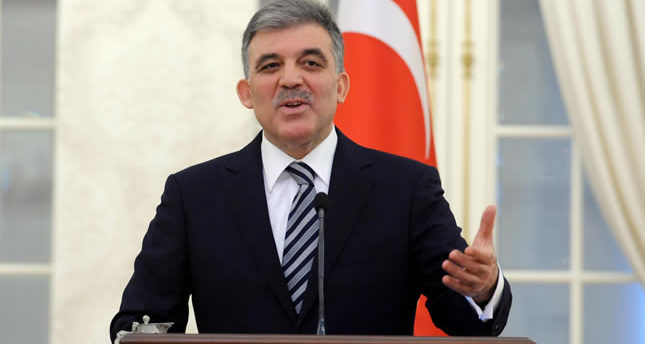 by daily sabah Mar 10, 2014 12:00 am
Istanbul - In a statement on Friday, President Abdullah Gül dismissed allegations that Turkey's new Internet law is set to ban popular social media platforms such as Facebook and Youtube.Gül stated that the banning of such global media platforms was out of the question, adding that necessary amendments have been made to controversial segments of the new law at his request. "Whatever constitutes a crime in the real world constitutes a crime in the virtual world," Gül said, stressing that crimes committed online which violate the personal privacy and security of individuals would be tried in court.

The new law was passed by the Turkish Parliament on Feb. 26 as part of an omnibus bill package. Gül demanded that certain parts of the law be revised in order for him to ratify the bill. The law has been criticized for censoring the Internet and giving excessive powers to the telecommunications authority (TİB). However, supporters of the law claim it actually aims to bring regulation and standardization to the system by establishing a single body with which the courts can correspond in times of dispute, as well as abolish prison sentences for cybercrimes and attract foreign investors. Minister of Transport, Maritime and Communications Lütfi Elvan defended the law on the grounds that it is the government's duty to protect its citizens from privacy violations and the fact that the new law will prevent bans on entire websites and only block access to content that directly violates a person's privacy and personal rights. The TİB will only be permitted to request trafficking information as demanded by the courts under the scope of a criminal investigation.

On the other hand, the blocking of access to controversial content will have to be presented for the approval of a penal court judge within 24 hours, after which the judge will be given 48 hours to make a final decision. The block will be automatically lifted in the case that the court fails to make a decision within 24 hours.