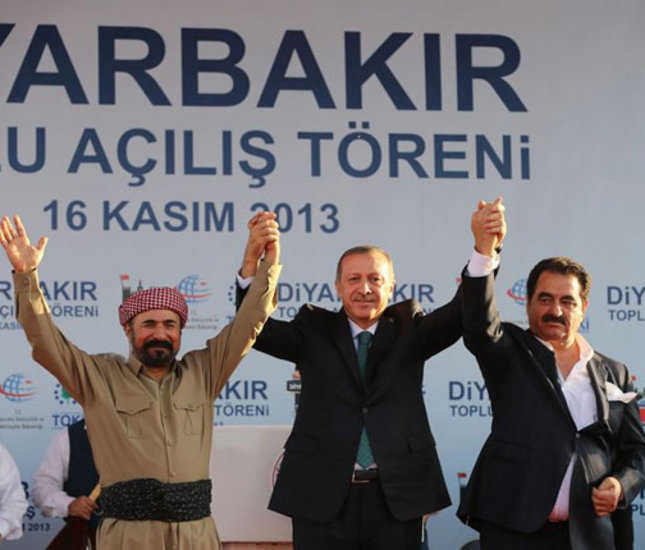 Turkey's largest Kurdish-majority city, Diyarbakır, witnesses a calm election season due to the ongoing reconciliation process and the commonly held belief Prime Minister Erdogan is a safeguard for peace

From the outset of the Dec. 17 probe, experts and armchair politicians alike have attempted to predict the extent to which illegal wiretaps, leaked voice recordings and allegations will affect the ballot box on March 30.

As Turkish media focuses on the capital's stormy weather at the expense of local campaigns, some believe that national politics will cast a shadow on local races.

At the heart of Turkey's Kurdish political scene, however, Diyarbakır's intellectual and political leaders note that the Kurdish community's priorities and expectations take precedence over national drama.

Diyarbakır's political landscape differs considerably from elsewhere in the nation. While only 7 percent of the general population support the Peace and Democracy Party (BDP), politician Osman Baydemir won the mayoral race for BDP twice in 2004 and 2009, and he is currently running for mayor in neighboring Şanlıurfa where the AK Party outperformed Baydemir's party in recent years.

In the most recent local race, Baydemir won against then-AK Party parliamentarian Kutbettin Arzu with a 34-point lead. Following Baydemir's departure, it remains to be seen if Co-chairperson Gültan Kışanak will deliver the desired results.

BDP supporters, however, remind skeptics that Osman Baydemir was no public figure prior to becoming a mayor a decade ago. Meanwhile, AK Party candidate Galip Ensarioğlu, a sitting member of Parliament for Diyarbakır, seeks to increase his party's local support beyond 31.5 percent which the party won in the 2009 local election.

According to Kurdish defense attorney Cabbar Leygara, the ruling party made a good call by nominating Ensarioğlu "because he knows how to run an election campaign." Many, however, rule out the possibility of the AK Party winning the mayoral race in Diyarbakır.

"The ruling party's main objective will be to bridge the large gap between themselves and the BDP," said Sedat Yurtdas who served as a parliamentarian in the 1990s before his Democracy Party (DEP) was outlawed due to its pro-Kurdish platform. The overall sense on the ground seems to hint that the status quo will continue after election day.

Many observers including Şah İsmail Bedirhanoglu, who presides over the Federation of Eastern and Southeastern Business Associations believe that voter blocs are so entrenched that no major changes should be expected. "The Kurdish peace process certainly benefits the AK Party, so the ruling party might win a few additional points this time around," he remarked.

Mehmet Emin Aktar concurs. The ongoing power struggle between Mr. Erdoğan's government and the Gülen Movement is largely irrelevant to the Kurds, he noted. "But the perception that the Gülenists seek to prevent peace might reflect positively on the AK Party at the local level."

Yurtdaş, however, argues that the vast majority in Diyarbakır already votes against the ruling party - a factor that would limit the national debate's influence on the mayoral race.

Generally speaking, Turkey's Kurds believe that the outcome of the local elections is primarily important as a test of the AK Party's popular appeal at the national level.

"The Kurds are not worried about their end of the deal as Abdullah Öcalan supports a peaceful solution despite certain disappointing developments," Leygara argued. "But the people believe that there needs to be a single counterpart at the other end of the table. The real risk, therefore, is instability. Only a powerful Turkish government can tackle this serious problem." Bedirhanoglu agrees. "There is a strong sense that there can be no solution without Erdogan. A lot of people were concerned about the peace process during the Gezi Park protests and the Dec. 17 operation. The talks, however, continue nonetheless."

Despite the common view that the Kurdish population regards Recep Tayyip Erdogan as a safeguard on the Turkish side, there is overall demand for more comprehensive reforms. "The government needs to take quick steps, but such efforts often involve a considerable amount of political risk. We cannot rush a solution to a chronic problem dating back two centuries. Things are better compared to a decade ago, but it was discouraging to see that the most recent democratization package did not tackle the long-standing problem of counterterrorism laws," Aktar commented.

While admitting that reforms were often too little too late, Leygara warns that not all problems stem from the country's political leadership. "Turkish courts seek to defend the state and stick to the old ways instead of embracing reforms," he said.

While the mayoral race will be decided between the BDP and the AK Party, a welcome addition to the mix is Hüda-Par, a pro-Kurdish ultraconservative party with alleged ties to the Hezbollah.

When asked why the movement established a political party considering their categorical opposition to parliamentary democracy, one Hüda-Par member argued that a political party served as a useful means to expand their popular base. "When you represent a political party, it's alright to knock on people's doors and convey God's words to them," he reasoned.

Despite the party's controversial background, many seem to welcome greater diversity in local politics. According to Mehmet Emin Aktar, former head of the Diyarbakır Bar Association, the local race is an opportunity for Hüda-Par supporters to reflect on their platform. "Everybody should have a right to political representation. The local elections will assess the party's popular appeal and inevitably push them toward a more moderate position," he commented. Contrary to popular belief that Hüda-Par would be unable to compete with the two major parties at the local level, Şerif, a physics teacher and campaign volunteer, argued that those who underestimate their party's popularity will be surprised on election day.