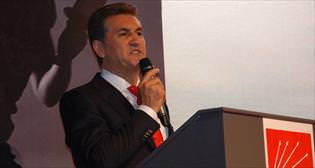 by Mar 11, 2014 12:00 am
Mustafa Sarigül, the Istanbul mayoral candidate for the Republican People's Party (CHP), outlined his election promises at a press conference on Sunday.

He said the party had about 200 projects for Istanbul and picked 28 out of these to be presented to the public. Sarigül said Istanbul needed a better transportation system, urban planning and "urban development" instead of "urban transportation."

Despite the pomp, the political platform presented by Sarigül embodies a number of negative messages and does not include enough new solutions or ideas.

Explaining his projects, Sarigül repeated his disapproval of the third airport, planned to be completed in 2016 servicing over 150 million passengers per year, on the grounds he did not believe the location suitable. He suggested the airport be constructed in Silivri instead and stated he will be discussing the matter with the government in Ankara. He also opposed the Kanal Istanbul project and noted he would take action to stop the project, which aims to reduce threats posed by oil tankers passing through the Bosporus and to reduce marine traffic and pollution in the Straits. He also stated that if he was to become mayor, he would not let the government interfere in the municipal affairs of Istanbul and that the prime minister cannot impose projects on Istanbul.

Sarigül's negative stance is controversial, received criticism from circles within the CHP and is believed to be the main source of growing rivalry within the party. Edirne's Mayor Hamdi Sedefçi previously complained about Sarigül's excessive power. "[CHP Chairman Kemal] Kiliçdaroğlu seems as though he is under Sarigül's pressure," said Sedefçi, who resigned from the CHP on the grounds that "Sarigül took over the party."

Sedefçi accused Sarigül of acting like the chairman of the party after Sedefçi was promised to be nominated as a candidate but Sarigül unilaterally vetoed his nomination.

Sarigül also is criticized for being unable to keep his temper while campaigning, as was the case when he caused a huge outcry after punching a citizen at Feshane and scolding others for just standing and not clapping. Journalist Sevilay Yükselir said Sarigül previously attended anger management courses in 2011 because he has always had this problem. Political commentator Devrim Barış Çelik referred to the time when Sarigül punched Ateş Ünal Erzen at a party convention and contended the politician is unable to control his temper.

"The current state of events also indicates that he is defeated by his excitement for political ambitions," said Çelik, who pointed out Sarigül's temper is usually revealed when there are intense political crowds or if something against him is said or done. "All candidate political parties or actors inevitably develop negative political propaganda strategies in efforts to discredit the politicians in power," said Çelik, who also noted such propaganda alone is not sufficient to win the elections because voters choose candidates who not only discredit the current political actors but those who also promise a better future and present viable solutions to current issues. "This is why Sarigül criticizes the issue of traffic in Istanbul, but he also presents suggestions to resolve the issue in cooperation with Istanbulites, nongovernmental organizations and all actors," according to Çelik.

The most recent polls conducted by Denge Research Institute in 36 districts of Istanbul among 3,066 people indicate that 27.4 percent of people who said they would vote for the CHP in the upcoming local elections do not think that Sarigül will win the elections. While 30.7 percent of those surveyed expressed they do not think Sarigül's projects are convincing, 53.3 percent said the AK Party candidate Kadir Topbaş's election campaign projects were convincing and viable.

Sarigül was expelled from the CHP after a conflict with the party's previous chairman Deniz Baykal on corruption charges. He is currently considered to be the strongest candidate for chairman of the CHP and expresses his desire to be the prime minister of the country.

However, his ambitions could be at stake in the event that he is unable to win the upcoming local elections or gain the expected amount of votes.