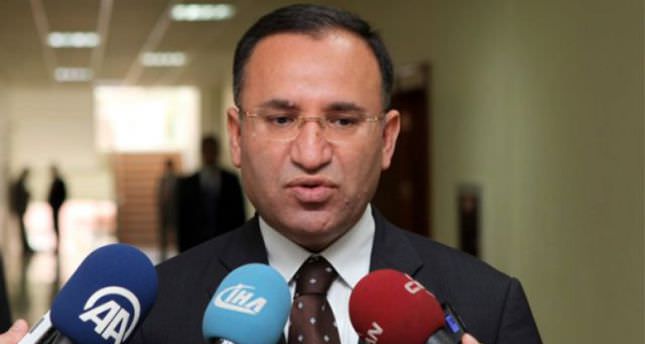 by daily sabah Mar 12, 2014 12:00 am
Istanbul - Turkey's Justice Minister, Bekir Bozdağ, yesterday remarked on the release of defendants in important cases, such as the Ergenekon coup plot case and the Kurdish Communities Union (KCK) case. The 13th High Criminal Court released some defendants who were imprisoned for more than five years. "The 13th High Criminal Court is not authorized to give protection measures, launch investigations or judge. Those courts are abolished with the approval of the Turkish president, and the only duty they can fulfil is transferring their documents," Bozdağ said.

Calling on the Supreme Board of Judges and Prosecutors (HSYK) to take action against the alleged decisions given by the High Criminal Court, Bozdağ said, "The duties of the judges and prosecutors do not include decision-making. If the court decided to take protection measures, its decision is illegitimate. The authority of setting up or abolishing courts belongs to the Grand National Assembly of Turkey [TBMM], that's why none of the courts have the right to disregard the Parliament's decision."

Last week, the Specially Authorized Courts (ÖYM), including the High Criminal Courts, was abolished with the approval of Turkish President Abdullah Gül. According to the new amendments, all ÖYMs will be abolished and prosecutors and judges who work under the ÖYMs will be appointed by the HSYK to suitable positions within 15 days after the new regulation is enacted. The new law also stipulates that the maximum pretrial detention period is reduced to five years from 10 years.