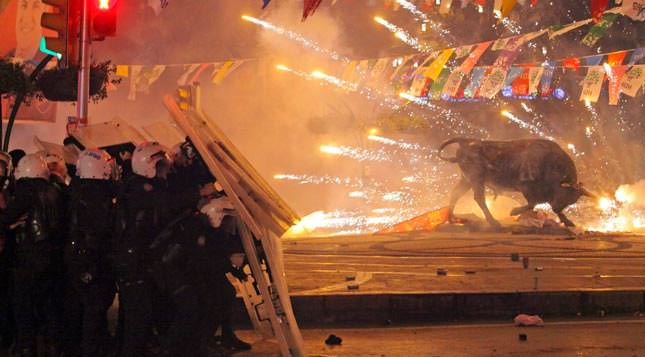 Istanbul - Teenager Berkin Elvan's death after 269 days in a coma due to injuries he sustained during a police crackdown, led to the protests. During his funeral yesterday, protesters set up barricades on streets and confronted the police who had taken security measures for the funeral.

Elvan, who previously participated in the Gezi Park protests was heavily injured during a police crackdown in Istanbul's Okmeydanı district on Jun. 16, 2013. He was allegedly out to buy bread when he found himself in the middle of the police crackdown.

Demonstrators from various radical groups embraced Elvan. He became an icon for groups ranging from far-leftists affiliated with the terrorist Revolutionary People's Liberation Party-Front (DHKP/C) involved in the U.S. embassy bombing last year to anarchist groups venting their fury at the police and state.

Thousands of people converged in front of the Okmeydanı Cemevi (an Alevi house of worship) where a funeral for Elvan was held.
Waving banners and flags of far-left groups, the crowd chanted, "Berkin Elvan is immortal."

Some demonstrators among the crowd put up barricades on the streets leading to the cemevi, as the funeral started at 12:00 p.m. local time. Turkish police announced Tuesday that riot police deployed at the funeral against likely rioters would "act carefully" to prevent violent confrontations with demonstrators.

As the funeral ceremony ended and Elvan's body was carried to his home before burial at the cemetery, the boy's father, Sami Elvan, said: "We bid farewell to him. My son is gone, but I have millions of sons now."

Some far-left groups that attended the funeral called for a march to Taksim Gezi Park after Elvan's burial. The park was closed to the public by police and throngs of riot police officers are deployed at the park and its vicinity. Public buses with Okmeydanı along their route, changed their routes over concerns of attacks by anarchist groups.

In Ankara, police fired teargas and water cannons to expel a crowd of protesters from Kızılay Square.

Protests broke out across the country after Elvan's family announced his death on Tuesday morning. In Istanbul, protesters took to the streets in the districts of Taksim, Beşiktaş and Kadıköy that night. Hundreds of people confronted riot police who attempted to disperse the unauthorized rallies.

In Beşiktaş, demonstrators trashed the election campaign office of the ruling AK Party. In Nişantaşı, Turkish police stopped the crowd of protesters marching to Taksim Square. Riot police fired teargas and water cannons at protesters who blocked the streets by setting up barricades. In Kadıköy on the Asian side of Istanbul, about 1,000 protesters marched towards the office of AK Party's local branch.

Protesters hurled stones, bottles and fireworks at the riot police confronting them. They then proceeded to throw stones at a public bus on the street. Demonstrators blocked a street in Kadıköy with the evacuated bus. In the Avcılar district, demonstrators torched an election campaign vehicle of the AK Party.

During the late long unrest following Elvan's funeral, the clashes between two groups left two people injured and one person dead. Two opposed groups fought with stones and rods in Istanbul's Okmeydanı where protests for Elvan's death took place. 22 year old Burak Can Karamanoğlu was left dead by shot gun. Another two people injured due to the shooting, taken to the Okmeydanı Training and Research Hospital.

Governship of Istanbul said the police making a great effort to find the perpetrators.

In the capital Ankara, protesters responded to riot police firing teargas and water cannons with fireworks and stones. Protesters continued until late Tuesday, and 51 demonstrators who resisted the police's call to disperse were arrested.

Protests also took place in other cities including İzmir, Mersin, Antalya, Adana, Denizli, Tunceli and Kocaeli. Riot police intervened in demonstrations and arrested scores of people in those cities.

The police was criticized for the disproportionate use of force during the crackdown on the Gezi Park protests. Turkish Prime Minister Recep Tayyip Erdoğan has acknowledged that police actions toward protesters during initially peaceful protests was harsh and has since rebuked "those responsible for it." President Abdullah Gül, who conveyed condolences to the boy's family on Tuesday, said measures would be taken to ensure "this tragedy will not repeated."

Government officials also expressed their grief upon Elvan's death. Foreign Minister Ahmet Davutoğlu echoed Gül's sentiments and stated he hoped the deadly incident would be the "last such incident." "But (the death of Elvan) should not be a reason for acts to disrupt public order," Davutoğlu added, referring to protests. Deputy Prime Minister Bülent Arınç said it was "a very sad incident mourned by all of Turkey," and added "We have to be more careful to prevent deaths (in protests). We lost a very young man and it gave us great pain. Yet, we cannot allow some people to exploit this incident to incite strife in Turkey."

Prime Minister Erdoğan warned the public against radical groups who took to the streets after the funeral. "Trying to set fire to the streets 18 days before elections is not a democratic stance," Erdogan told a campaign rally in the southeastern city of Mardin. "I appeal to employers' organizations, trade unions and NGOs who are provoking incidents to show responsibility. Whoever has problems should solve them at the ballot box on March 30," he said.
Last Update: Mar 13, 2014 11:46 am
RELATED TOPICS