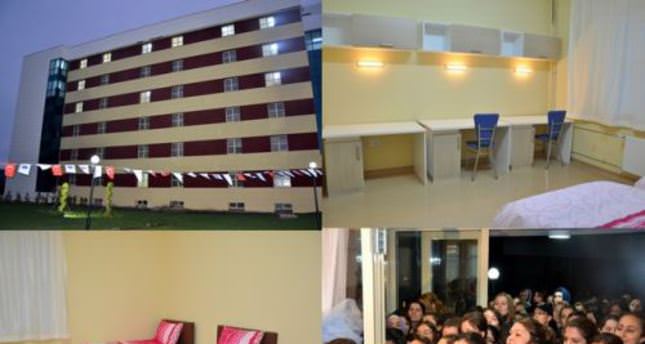 ANKARA – Turkish Prime Minister Recep Tayyip Erdoğan said any student who does not wish to stay in Gülen Movement-funded student housing will be sheltered in Turkish state dormitories.

Gülen Movement-funded dormitories are accused of kicking out hundreds of university students who did not acquiescence to anti-government indoctrination conducted regularly. Speaking to journalist Murat Karaalioğlu on a TV program aired Wednesday on Kanal 24, Erdoğan slammed Gülenists and their black propaganda against the AK Party.

Highlighting that 811 students moved to state dormitories on Wednesday, Erdoğan said, "I am addressing those students: If you are disturbed or uncomfortable there, we will host you either in state dormitories or social facilities. We will never leave you out in the cold. We will never leave our kids in their [the Gülen Movement's] pitiless hands."

He harshly criticized the Gülen Movement's use of persuasion to deter students from voting for the AK Party and said, "We do not have persuasion rooms in our dormitories as they have." Erdoğan accused the Gülen Movement of trying to influence students' political views and pressure them to vote against the AK Party. According to sources, nearly 5,000 students who stayed in Gülen-funded houses were dismissed or left on their own accord and moved to state dormitories because they do not support the Gülenists' black propaganda against the ruling AK Party. Turkey's General Directorate of Credit and Dormitories Agency stepped in to find a solution for those students at the instruction of Prime Minister Erdoğan.

It was reported that 4,749 students allegedly called the General Directorate of Credit and Dormitories and asked to stay in state dormitories due to the pressure they faced in Gülenist housing. The government proposed four different housing alternatives for students. They can move to vacant rooms in state dormitories. Private dormitory rooms can be rented by the government to accommodate students. If the students' accommodation needs continue, rooms in social facilities of cities and hotels will be allocated for those students and the costs will be covered by the government. Turkey's Youth and Sport Minister, Akif Çağatay Kılıç, made remarks about the Gülenist houses, saying, "We can host all of those students who have problems in Gülen-funded houses. I am calling on families not to worry. We will take concrete steps to prevent suffering to those students from Gülenists' pressures." Turkey has been shaken with the Gülen Movement's efforts to tarnish the Turkish government's image.

The infiltration of the movement into state structures was revealed during the Dec. 17 operation. In November 2013, the government's move to close down prep schools, which are mostly run by Gülenist followers, caused quite stir in the movement and led supporters to react by staging the Dec. 17 operation. Tensions between the government and Gülen Movement escalated after the operation when a number of businessmen and the sons of three former cabinet members were arrested. Erdoğan described the operation as a "dirty coup plot" to undermine the stability of his government. He responded to the movement's efforts by removing certain infiltrators in the police and judiciary.
Last Update: Mar 14, 2014 2:32 am
RELATED TOPICS