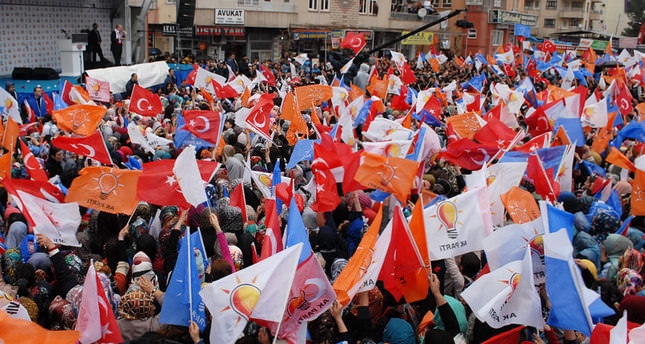 The government's reconciliation process, coupled with investments flowing into the region, will result in a tighter race in the east because of AK Party's rise in popularity

BATMAN/GAZIANTEP – Recep Tayyip Erdoğan, the prime minister, addressed huge crowds in Batman and Gaziantep in the east of the country on Friday, telling the region's Kurdish-majority people that during his tenure, bans on Kurdish language and culture were mostly lifted, along with the state of emergency that had lasted decades.

According to polls conducted by Objective Research Centre in Diyarbakır and Mardin, AK Party's biggest rival in the east, the pro-Kurdish Peace and Democracy Party (BDP) will find it harder to dominate mayoral posts in the region. In both Diyarbakır and Mardin, the AK Party is expected to increase its share of the votes and contest mayoral posts. The AK Party will offer a serious challenge in the region previously seen as a BDP stronghold.

Objective Research Centre's (ORC) polls conducted in Diyarbakır and Mardin suggest that these two cities will witness race in the upcoming local elections on March 30.

The strongest rival of the ruling AK Party in those cities is the Kurdish-supported left-wing Peace and Democracy Party (BDP).

The AK Party's voting rate has increased since the 2009 elections as a result of its efforts to push through a democratization package and support the reconciliation process with the Kurds.

The democratization package included measures aimed at solving some of the problems faced by the Kurdish citizens in Turkey, including the opportunity to be educated in their native language and reinstating former non-Turkish names of villages and neighborhoods.

The package further limits the banning of parties, particularly Kurdishoriented parties which have been outlawed, such as the Democratic Society Party (DTP), Democratic People's Party (DEHAP) and People's Democracy Party (HADEP). The reconciliation process includes concrete steps to end the long-running conflict between the Kurdistan Workers' Party (PKK) and Ankara has had a huge impact in increasing the popularity of the AK Party in those cities.

The nomination of current Diyarbakır Mayor Osman Baydemir in Urfa saw the number of votes for BDP slip in Diyarbakır. Accepted as a popular candidate, Baydemir has a moderate policy that helped him receive the votes of both conservatives and leftists.

In contrast to Baydemir, BDP's Diyarbakır candidate Kışanak has been adopting a firm stance in favor of her policies. AK Party candidate Ensarioğlu is also expected to benefit from the AK Party's moderate policies in the region. While a tight race is expected, critics say that parties which have not promoted Kurdishoriented policies have failed to gain the upper hand in Diyarbakır, which is one of the heavily populated Kurdish cities.

Another party that is expected to fare well in the elections is the Free Cause Party (HUDA-PAR), which portrays itself as a Kurdish-based Sunni Islamic Party. HUDA-PAR dates back to the 1990s when the group acted as an Islamist social group and was opposed to leftist Kurdish movements and the PKK. HUDA-PAR is known for opposing demands for Kurdish autonomy and favoring unification under the umbrella of Islam.

HUDA-PAR candidate Hüseyin Yılmaz is expected to receive 6 percent of the votes. HUDA-PAR's voting rates indicate that the left-wing BDP's absolute control over the Kurdish-oriented politics has started to decline while portions of the region's population have begun to support Kurdish-oriented Islamist parties' politics.

Another city where local elections are expected to be tight between the AK Party and BDP is Mardin, in southeastern Turkey. ORC polls show that BDP's candidate Ahmet Türk, will see him garner about 39.5 percent whereas the AK Party candidate M. Vejdi Kahraman is expected to receive 38.1 percent.

The Republican People's Party (CHP) candidate A. Cemil Mataracı followed Kahraman with 10 percent of the votes. Compared to elections in 2009, in which the AK Party received 45 percent of the votes, the March 30 ballots will probably see a slight decrease in terms of the voting rates of AK Party since Mardin has become a metropolitan municipality and has incorporated numerous Kurdish populated districts.

Speaking to Daily Sabah, Mardin and Diyarbakır residents commented on the upcoming elections. Ahmet Tutar, who lives in Mardin said, "Even though we are satisfied with the AK Party government, certain fundamental problems should be solved. Ahmet Türk has popularity in the region and has carried out successful activities in the BDP, that's why I will vote for BDP."

İzzet Kaya, a Mardin resident, said, "The BDP is focused on only the problems of the Kurdish population. I was pleased with the AK Party's services in the city. The investments in the region, the peace process and steps taken to democratization led me vote for the AK Party."
Criticizing BDP's harsh stance, Abdurrahman Civan said, "Mardin has geographical and historical significance, but scores of people immigrated due to terrorism in the region. The AK Party has developed the city and solved the security issues. This is enough reason for me to vote for the AK Party."

Necip Karaoğlu said, "Ahmet Türk is a popular tribe leader in Mardin, that's why there are Kurdish people who want to vote for him. But the AK Party had the upper hand. The residents of Mardin want to see service and the AK Party has invested in the city. I will vote for the AK Party." He commented on the AK Party's Mardin rally, adding, "that was the most enthusiastic rally held in Mardin so far."

Tevfik Karataş, who lives in Diyarbakır, said, "The People of Diyarbakır directly voted for Osman Baydemir, not for the BDP. But Gülten Kışanak's candidacy can change the minds of Diyarbakır residents."

Ahmet Dalkıran said, "However important Baydemir might be, Diyarbakır's rural population living in the villages and hamlets surrounding the city will prefer to vote for the BDP. But the AK Party candidate Galip Ensarioğlu may draw in the votes of the educated population."
Claiming that the investments in Diyarbakır are inadequate due to the BDP, Selime Koç said, "Diyarbakır should have been developed at least as much as Kayseri, Konya, or İzmit, but due to the BDP's policies, it remains underdeveloped. I believe Ensari will benefit Diyarbakır."