Gülen Movement panned by the opposition 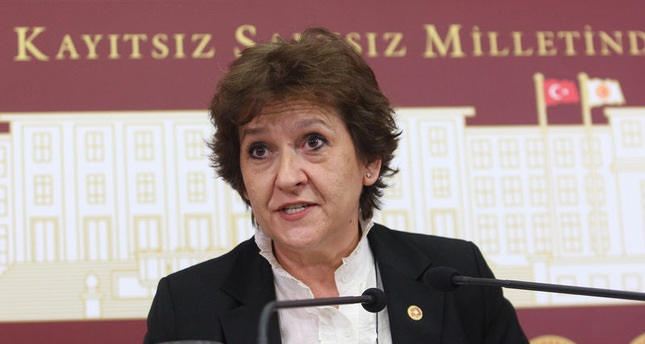 Fethullah Gülen and the Gülen Movement are receiving criticism from all strata of society. Members of opposition parties and former Judge Advocate General Zeki Üçok referred to the movement's insidious character and blamed it for infiltrating all levels of state institutions

ISTANBUL – Opposition Parliament members harshly criticized the Gülen Movement for its agenda. Birgül Ayman Güler, the Republican People's Party (CHP) parliamentarian from İzmir harshly criticized Fethullah Gülen for his condolence message following the death of Berkin Elvan - a 15-year-old boy who was hit by a tear gas canister during last year's Gezi Park protests - after he spent 269 days in a coma. Güler accused Fethullah Gülen of exploiting religious sentiment for "dirty politics" to create division between the Alevi and Sunni sects after Gülen said he wishes "patience for our Alevi brothers and sisters who have successfully preserved caution and dignity."

She claimed Gülen was the mastermind behind the current atmosphere of hatred and should not pretend that he is innocent. "This sort of mindset does not hesitate to use the killing of a child as a means to create division between different sects," Güler said.

On the other hand, the Parliamentary Wiretapping Research Commission stated that it uncovered unlawful wiretapping incidents months ago. According to the report, a former intelligence agent from the U.S. came to Turkey to train special teams for wiretapping and video surveillance.

The commission was requested to determine the connection between the Gülen Movement, Turkey's telecommunications authority (TİB) and the police force.

The CHP's members of parliament from Balıkesir, Denizli and Kırklareli, signed a dissenting opinion on the matter and expressed it was not sufficient to only "research" the issue since high profile officials like the Chief of General Staff had been wiretapped with the recordings leaked to the media. The dissenting opinion noted that official state institutions claimed the wiretappings were not carried out with a request to the commission's demands and noted that the "wiretapping is still conducted through the TİB and police force and seen as appropriate - which is evident through TİB's objection to decisions regarding wiretapping."

A report written by the CHP parliamentarian from İzmir claimed the wiretappings were not conducted lawfully or by authorized institutions, and noted digital documents were especially manipulated while documents that should be destroyed were being secretly stored and served to other individuals or institutions. According to the report, the outcome of wiretapping and video surveillance devices acquired from Israeli, Canadian and American firms was not investigated and it is, therefore, necessary to reinvestigate the practices conducted by TİB in the past 10 years.

Aksüngür also stated that the government should develop regulations to determine how to inspect GSM networks and find a solution to block unauthorized access to GSM phone lines through the development of necessary software programs. "Those who are authorized to conduct wiretappings should be identified and GSM operators should be able to determine what is going on," Aksüngür said. Nationalist Movement Party (MHP) parliamentarians have also issued a dissenting opinion stating that the inspections carried out by TİB were not able to prevent exceeding powers, bringing national security levels to a minimum.

Former Judge Advocate General Zeki Üçok has also criticized the movement for its attempts to establish a parallel structure within state institutions. Referring to the movement as a dark and clandestine organization, Üçok stated that the movement directly aims to bring the government, the national army and the intelligence agency down. He claimed the movement has access to confidential information about generals and commanders and suggested that it established a secret structure within the country's security forces and judiciary.

According to Üçok, the movement operates in a secretive manner whereby even the names of members are concealed through code names resembling a terrorist organization. Üçok said the movement uses spying, blackmail and other measures to infest and bring down the Turkish state and he called on the government to take action.