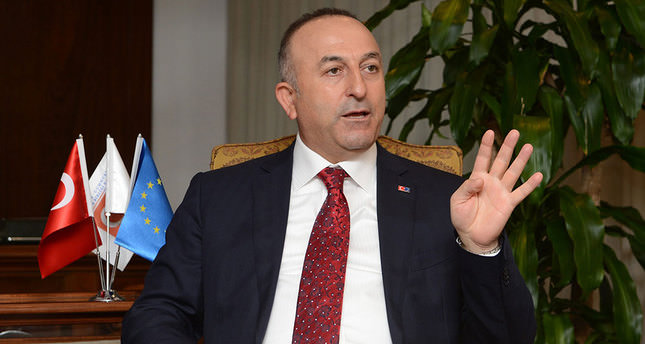 ANKARA – Negotiations over Turkey's entry into the European Union have been ongoing since 2005. After a three-year pause, last year saw the opening of a new chapter in negotiations to breathe new life into the ongoing process. Turkey plans to maintain the momentum by opening two more rounds of negotiations in 2014. The events in Turkey following the Dec. 17 operations drew criticism from the EU. To discuss where Turkey stands now in the EU membership process and the impact of the post-Dec. 17 events, we sat down with the minister for EU Affairs and former president of the Parliamentary Assembly of the Council of Europe, Mevlüt Çavuşoğlu.

– What is your evaluation of the present state of relations with the EU?

The opening of chapter 22 of negotiations during 2013 has created a more positive atmosphere in Turkey's relations with the EU. In September of the past year, our prime minister announced a comprehensive democratization package. The signing of the readmission agreement as well as visa free travel agreements has contributed to the positive relations. We are aiming for this to continue and have repeatedly said that 2014 will be the year of the EU. During our visits to Brussels, Berlin and Rome this year, as well as the state visits of the presidents of France, Spain and Romania to Ankara, we made clear that Turkey wants the EU negotiation process to be accelerated and the message was received warmly by other leaders.

– What is your evaluation of the progress report approved by the European parliament?

While the report states that the negotiations should continue and new chapters should be opened, it does not state anything tangible as to how this should be done. While the report was being compiled, there were some circles that aimed to show Turkey in a negative light. A motion stating that the prime minister's views that student housing should be kept gender segregated is a breach of right to private life, was only put forth on the last day of talks. There were attempts to include the regulation on alcohol as a violation of individual rights although there are similar practices in EU member states. Yet the fifth judicial package contains clauses that guarantee everyone's lifestyle. On the one hand, we pass a legislation that guarantees everyone's lifestyle choices and the European Parliament does not take note. Yet on the other hand, the prime minister's views on gender segregated student housing is put forth as a motion. It's not possible to think this approach as one of goodwill. The removal of Specially Authorized Courts (ÖYM) and the limitation set custody periods, as advised by the European Parliament, are some of the reforms which have already been implemented.

– In relation to the report approved by the European Parliament, the EU Affairs Ministry released a statement on Thursday stating that it is not appropriate to subject the HSYK and Internet laws to criticism without seeing them first. Could you elaborate on the subject?

Regarding the Supreme Board of Judges and Prosecutors (HSYK) and Internet laws, meetings were held in Brussels followed by bilateral meetings and telephone calls with our European counterparts. We explained in detail what it is we are fighting against. The HSYK agreement in the 2010 constitutional reform package stated that it was one vote per judge or prosecutor.

This was in line with the views of the Venice Commission. The opposition applied to the Constitutional Court to have the voting system changed, allowing a citizen to vote for a block list rather than an individual. With this change the door was opened for the Gülen group to take control of the HSYK. In our meetings, we have offered to return to the voting system as endorsed by the Venice Commission but our European counterparts reject this. The essence of the HSYK law, when compared to similar legislations in Europe, clearly does not threaten the rule of law and judiciary's independence.

On all these matters, the EU and Turkey must be able to convince one another. This is a normal situation. Europe can state that it does not believe in the entity Turkey labels as the parallel state or even go as far as to claim that those people are good people. We do not need to be in agreement or even convince each other on this subject. The rule of law, democracy and human rights are founding principles of the EU, the core of which is embodied in the Parliamentary Assembly of the Council of Europe, at which I served as president and defended these principals in the 47 members states of the Council of Europe. As I expressed to my European colleagues on numerous accounts, I find it reprehensible to receive criticism on the rule of law and democratic laws.

We can talk of tangible data on this matter. We can look to see if the EU has a working system or principles outlined for structures similar to the HSYK. However, member states have differing practices. Thus proving that the EU does not have a standard on this issue. During the talks, we even asked if there was a country with exemplary practices to which we could compare the HSYK law. However, this recommendation of ours did not receive a positive response. Once during the talks Commissioner (Setfan) Füle, who is responsible for the process, said that his job did not concern other countries, only Turkey.

While in some European countries HSYK type institutions are chaired by a monarch and the power to remove the board rests with the justice minister, when this type of arrangement - where the justice minister will have reduced powers - is suggested for Turkey, it is labeled as problematic due to prejudices. Therefore, it is not appropriate to come to any set of conclusions about the HSYK law. This is the point the EU Affairs Ministry made with our statement.

– The report by the European Parliament recommended that chapters 23 and 24 of negotiations open. Do you expect any new chapters to open in 2014 when the EU presidency is with Greece?

While we do expect new chapters to open in 2014 we are not entirely certain as to whether this will happen under the presidency of Greece because we have not yet seen a positive step taken by Greece. As a result, both sides are keen for chapters to open. There are still chapters that are being blocked by Southern Cyprus. We expect the EU to take concrete steps and set the tone on this matter.

– In the worst-case scenario, can the negotiations between Turkey and the EU be put on hold?

I do not consider this to be remotely possible.

A European parliamentarian can air their own personal views on this matter and reflect it as though it is the official view of the European Parliament. A Liberal Party parliamentarian submitted motions for the suspension of negotiations.

Aside from himself only two others supported the motion. Thus such malicious and unpopular actions are not reflective of the European Parliament and should not be considered as such.

– How do you explain the Gülen Movement to European counterparts? Do they view this as a conspiracy theory?

– How do you answer the question of "Why did you turn a blind eye to the Gülen Movement?"

We explain all that is happening in detail to our counterparts but I can summarize it. As the AK Party, we forged alliances with all segments of society in order to develop a civil society and remove Turkey from the grip of the military.

– The letters sent by EU officials during the HSYK and Internet law process were heavily discussed. Is this normal?

In diplomatic relations, an exchange of views through formal letter exchanges is normal. We also issue letters to EU officials expressing our own views. We have been exchanging for a long time, this is not something new in our relations. The sole aim in trying to suggest this exchange of letters is new is to create a negative perception. The constructive criticism issued by the EU has always been taken into consideration. There are letters whose criticisms we agree with and take into consideration. It is inappropriate to show these developments as the EU forcing its will on Turkey.

– How do you evaluate the new negotiation process in Cyprus and Southern Cyprus' blockade on certain chapters?

The new peace process in Cyprus is a promising development. We, as Turkey, would prefer for these negotiations to take place at the Foreign Ministry level rather than with undersecretaries.

However, the Greek side did not view this favorably. During this period both sides need to take steps to build confidence and everyone ought to lend political support. Turkey is approaching this period with sincerity, support and hope. The stance of the Greek side, being one of "first give us the Maraş region then the blockade on chapters will be lifted" is not a constructive approach towards peace. Even if the Greek side has good intentions, not every negotiation issue is a relevant prerequisite for peace. Our wish is for a comprehensive package, including military withdrawal from the island, to be put forth for negotiation. Once an agreement has been reached, it can then be taken to a referendum. We have an opportunity now for peace and stability for both sides, which ought not to be misused.

– Are there any efforts to reopen the seminary?

The Ministry of EU Affairs and the Ministry of National Education are continuing their work on this matter. As the ministry, we support the re-opening of the seminary. Since the work is not yet concluded, I cannot give a specific date.

– After the local elections will there be new reforms in the EU membership process?

Not just within the EU Affairs Ministry, but other ministries also, are working on reform packages. Once the work on the packages is completed, they will be brought forth to the agenda after March 30. It would not be appropriate for me to give any specifics about the content at this time. However, we will be accelerating reforms related to the EU after the elections.

– There is an expectation that the elections in May will yield results that will strengthen the extreme right in the European Parliament. If this occurs, will it not impact Turkey's EU membership process negatively?

It is true that throughout Europe there has been a general increase in the votes of extreme right and nationalistic parties. The European Parliament may see an increase of parliamentarians of this affiliation. A rise in the number of far right MEPs would not only affect Turkey's EU membership process but also EU discourse negatively. Thus this rising trend should worry all institutions and people who are involved in the future of the EU.