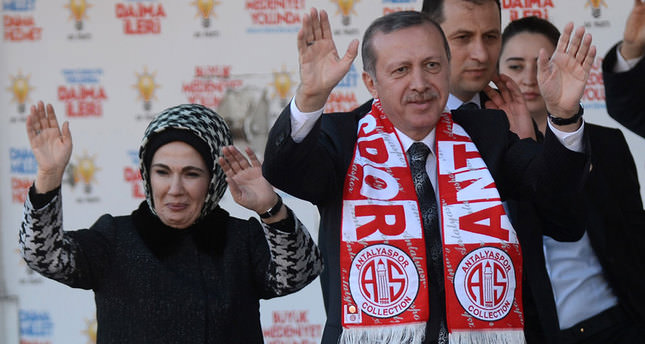 AK Party's Antalya mayoral candidate Menderes Türel accused the current mayor, CHP's Mustafa Akaydın, of doing nothing and voiced his determination to win back the post he lost in 2009

ANTALYA – Prime Minister Recep Tayyip Erdoğan held an election rally in the southern province of Antalya on Saturday where he addressed thousands of supporters. Erdoğan warned that many factions are still threatening to destabilize Turkey. "Recent events, including the Gezi Park protests, target Turkey's economic development, political stability and pro-active foreign policy," he said. He pledged that the government will take all necessary legal action against those who stand behind plots targeting Turkey, particularly the perpetrators of the Dec. 17 operations. "We will seek those who try to provoke violence on the streets. We will not leave the country to those who illegally wiretap people, fabricate voice recordings and provoke the youth," added Erdoğan.

Referring to recent news that thousands of Turks were illegally eavesdropped using wiretaps, he said, "Eavesdroping on the president and the prime minister is crime, it is spying. Whether the leaks are true or not, this is espionage. They will face charges of espionage." Later in his address, Erdoğan turned to the AK Party's Antalya metropolitan municipality mayoral candidate Menderes Türel and asked voters to support him.

Developments in national politics have caught the attention of many citizens despite the fact that local elections are approaching. A police officer at Kepez Arena, where the rally was held, said, "Gülenists infiltrated the police force almost completely. They were using the entire organization for their interest and they are creating obstructions for all those who are not allied wıth them. Now this structure has begun to unravel. A police officer who spoke anonymously added that, "Despite the fact that I normally vote for Nationalist Movement Party (MHP), I will vote for AK Party this time just to show my support to the prime minister in his rightful struggle against the Gülenists."

However residents of Antalya had varying opinions regarding upcoming elections. Aysun Özsöy, a teacher, said, "For me it doesn't matter whether the election is local or general. I always vote for Republican People's Party (CHP) because it's Atatürk's party."

Zülkifar Fırat, a confectionery owner, believes "If people look only at Antalya's city center then they will only see the AK Party and CHP running. But from my point of view, if you take surrounding counties into account, the MHP will win the election."

Fisherman Aykut Yılmaz disagrees, "I voted for the CHP candidate Akaydın in 2009 with great hope and expectations. However, I was disappointed because Akaydın has not made any improvements in city infrastructure over the past five years. I believe Menderes Türel and the AK Party will provide better services than CHP, therefore I will vote for the AK Party."

CHP candidate Mustafa Akaydın, the current mayor for Antalya and running for second term, cancelled our meeting at the last minute, hence his comments and views could not be recorded.

Menderes Türel is a former mayor of Antalya (2004-2009) and currently the vice president of the local AK Party. As a candidate of the AK Party, Menderes Türel says, "Nothing has changed in Antalya since we left the major in 2009...Our current mayor thinks that municipality administration is only about organizing festivals and small landscape design. In the last five years there has been no infrastructure investment whatsoever. The city is not developing and losing time due to this wrong approach to the municipality.

We would like resume serving the people from where we left off. We have designed comprehensive projects and included new ways and intersection projects to solve Antalya's traffic problem."