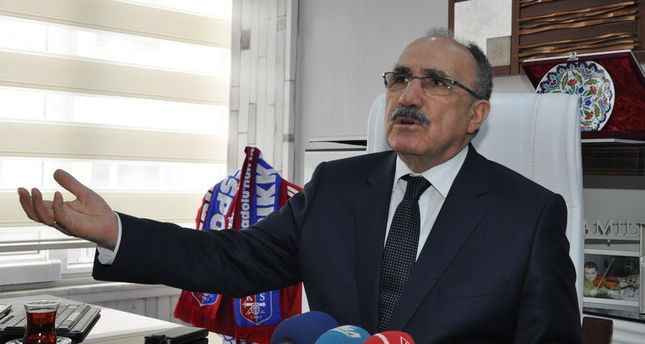 Action s undertaken by the leader of the Gülen Movement, Fethullah Gülen, shows he is no longer a religious leader but is now a political figure, said Deputy Prime Minister Beşir Atalay in a press conference yesterday.

ISTANBUL – Deputy Prime Minister Beşir Atalay made significant remarks on a TV program and answered questions on the current events and the upcoming local elections.

In response to the question about AK Party's voting rates, Atalay stated that the most recent polls indicate the party has about 50 percent of the votes for both the local and general elections. He also commented on Fethullah Gülen's recent interview with a Turkish newspaper and stated that Turkey is going through an extremely tough period. "The previous cursing sessions, wiretapping incidents and all else that has been done by the Gülen Movement indicate that it is no longer a religious movement, but rather a politically charged one," said Atalay.
The deputy prime minister also refused to accept the Gülen Movement's objections to any political involvement and claimed that they have been attempting to create an atmosphere of fear and distrust. Pointing to the fact that the movement has started a defamation campaign against the government, Atalay stated they are insulting, spreading lies and slander to change people's views in order to prevent them from voting for the AK Party in the upcoming local elections. Despite the defamation campaign, Beşir Atalay explained that the people do not believe in such claims and their votes reflect their full confidence and trust in the AK Party, which is also evident through the attendance of tens and thousands at the party's campaign rallies throughout the country.