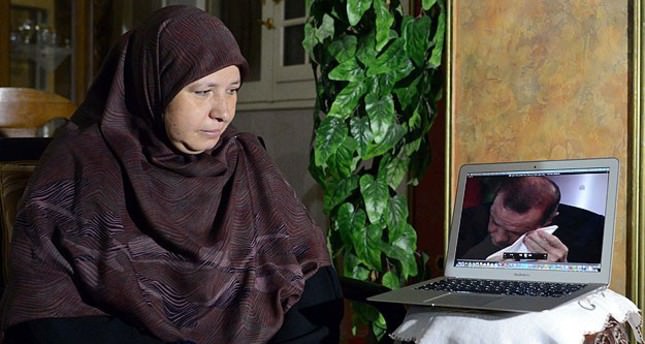 She was killed by a police officer using a sniper rifle to hunt protesters in the squares, chanting slogans against the coup and for Mohamed Morsi, the first democratically elected president of Egypt. She was only 17 when a bullet caused her death last Aug. 14 in Rabaa al-Adawiya Square, which has become the symbol of the anti-coup protests. It was claimed that she was chosen as a target deliberately as her father, Mohamed Baltagy, was one of the leaders of the Muslim Brotherhood. Her death echoed across the world strongly; thousands of people from several Muslim and non-Muslim countries organized demonstrations against the coup and its supporters.

When she was killed, her father was in prison, jailed by the coup government. A letter written by him was translated into dozens of languages, including Turkish.

In the letter he told her daughter about his love and sadness for not being able to join her funeral. The letter made Turkish Prime Minister Recep Tayyip Erdoğan cry during a televised program, when it was read. Hundreds of Turkish people printed the letter and hung it on walls in their homes and shops. Thousands of people attended the religious ceremony, organized to pray for her soul in several mosques across Turkey. It has become the norm to see her picture in Turkish people's homes, cars and elsewhere. On Sunday, Asma's mother, Sena Baltagy, participated in a TV program in Turkey by telephone. She said: "Asma is a martyr. They killed her. It is not important which police officer killed her. We know that the coup that stole our freedom killed her. The coup that deteriorated the situation compared to toppled dictator Hosni Mubarak's era killed her.

We will continue our struggle and never give up. I am grateful to Erdoğan for introducing my daughter to the world, for sharing our pain and for siding with us against the perpetrators of the coup."